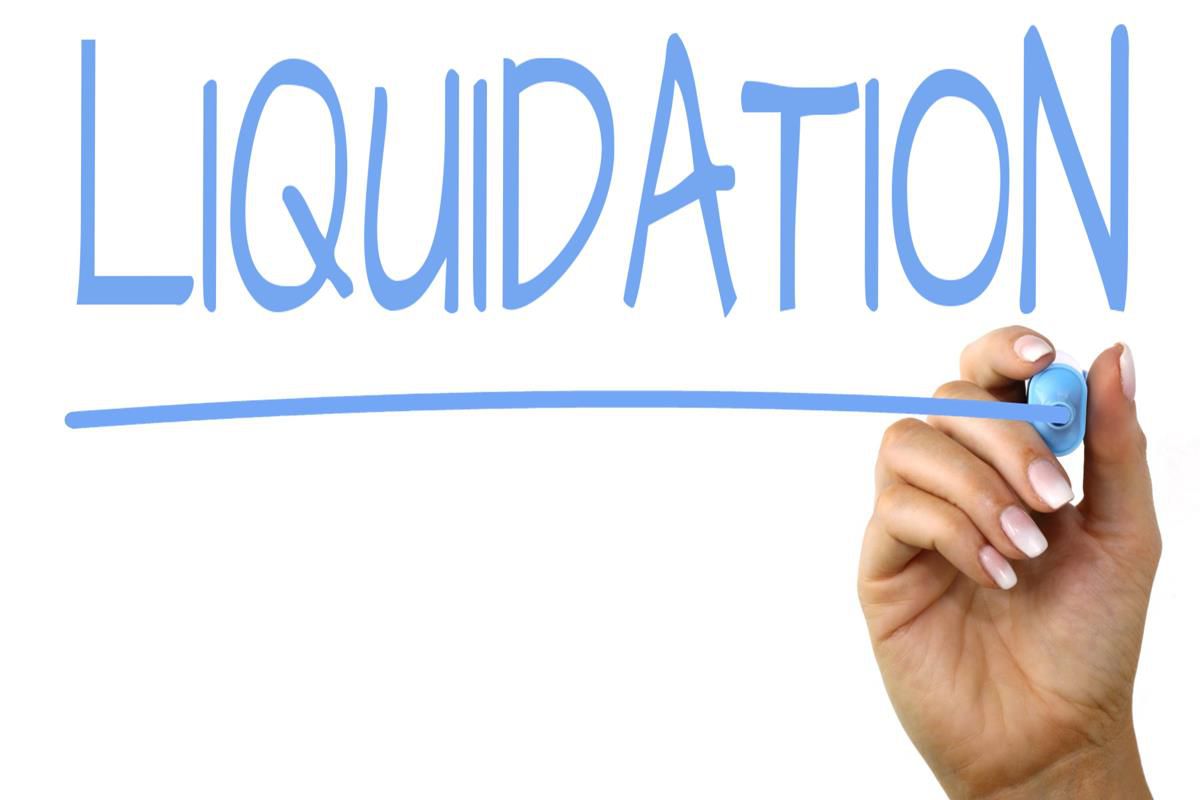 By Earl WebbJanuary 3, 2023No Comments
FacebookTweetLinkedIn

December 31, 2022 – “Liquidation sale” is a term that perks up the ears of many budget-minded consumers. It is often characterized by discounted prices on the remaining inventory in an effort to quickly sell off the remaining goods and clear out the store or warehouse.

Rarely can one find a better time to buy than when the holder of inventory needs to sell.

In 2022, seemingly no segment of the economy saw more liquidations than the blank check market.

I wrote in September’s SPAC Monitor, The Law Of Unintended Consequences, regarding the catalyst that caused a flood of SPAC liquidations this year:

“The unintended consequence of the Inflation Reduction Act, in addition to its inflationary policies, was the potential 1% excise tax on SPACs.

Specifically, the excise tax may apply to a public U.S. company that repurchases any of its shares after December 31st, 2022. Repurchases can refer to redemptions or any other transactions in which the company uses its cash to retire shares. However, for the excise tax to be applicable, the shares repurchased or redeemed would be netted against any shares issued in that taxable year. The excise tax is paid by the corporation, not the stockholder. It is equivalent to an additional corporate income tax but is applied even if the company is not profitable…

In any event, clearly, the share buyback tax was not meant for return of capital scenarios such as SPAC redemptions because investors are just getting their money back (plus accrued interest). Imagine you put money in a checking account and the Government wants to take 1% of anything you take out.

Hopefully, the U.S. Treasury Department provides additional guidance with respect to the application of the excise tax and its application to SPACs. Until then, uncertainty will reign.”

More than $144 billion of capital was raised across 614 SPAC IPOs in 2001. Over the year in which we saw frenzied blank check issuance, there were more than 2 SPAC IPOs per day on average. Since these were issued in 2021, and SPACs typically have an 18-24 month life, their deadlines were fast approaching in 2023. With a recession and equity bear market in full effect, the odds of a successful business combination, while competing against more than 500 SPACs at the time, were looking slim.

The average SPAC IPO in 2021 raised approximately $235 million. Generally, the sponsor puts up about 4% of the IPO proceeds as “at-risk capital”, which provides working capital for the SPAC to fund its expenses over its lifetime.

Into the fourth quarter of this year, with 2023’s 1% excise tax looming, many SPAC sponsors were scrambling. If they liquidated their SPACs at their designated deadlines in 2023, the sponsor would be liable for 1% of all the capital returned to stockholders. On the average $235 million SPAC, the sponsor would need to chunk up $2.35 million. This charge would be in addition to the roughly $9.4 million (4% of IPO proceeds) average at-risk capital that the sponsor would have spent funding the SPAC’s operations.

Understandably, throwing good money after bad was not an attractive proposition.

This Government-induced catalyst created an excellent opportunity for investors, as I outlined in October’s SPAC Monitor, When Unintended Consequences Bring Unexpected Results:

“The SPACs with deadlines in Q1/Q2 2023 that do not have mergers signed face unlikely prospects, therefore, are most probably to throw in the towel and choose to liquidate early.

According to Alpharank.com, there are 32 Delaware-domiciled SPACs that have deadlines in March or April of 2023 without a business combination signed. They represent an aggregate $7 billion market cap (average $218 million). The Accelerate Arbitrage Fund (TSX: ARB) owns a basket of these securities, accounting for nearly 10% of its portfolio.

These 2023 SPACs generally have a yield to maturity of 6%. Many will likely file for year-end 2022 liquidation to dodge the incoming excise tax in 2023. This early liquidation would accelerate their maturity. If they pursue early liquidation, that 6% yield turns into a 12%+ yield, and bingo, a double-digit yield with limited downside risk results.”

As uncertainty regarding the upcoming excise tax reigned, the investment opportunity played out as expected.

70 SPACS liquidated and returned money to investors since the start of December – more than the total number of SPAC liquidations in the market’s history. SPAC sponsors have lost more than $600 million of at-risk capital on liquidations this month and more than $1.1 billion this year. 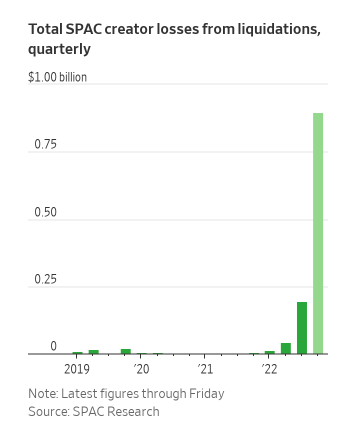 Those investors who were positioned for this liquidation sale were rewarded with attractive yields to maturity on discounted SPACs that returned capital to stockholders at NAV.

Now that the liquidation alpha trade played out, a new opportunity has emerged.

Nearly all SPACs are from two domiciles – either Delaware or Cayman. The SPAC universe is split evenly between both.

In addition, there has been uncertainty with respect to who covers the excise tax. As a result, SPAC investors have been worried that they would foot the bill, which would knock 1% off the NAV they would be entitled to. Therefore, over the past several months, Delaware-domiciled SPACs have traded at a discount to their Cayman-domiciled brethren. This difference is where the opportunity lies.

For those enterprising investors paying close attention, earlier this week, the Department of the Treasury and the Internal Revenue Service (IRS) quietly issued updated guidance on the Inflation Protection Act, including updates on the applicability of the excise tax. On page 17 of the updated guidance, clarity was provided to SPAC investors and sponsors.

The excise tax would no longer apply to SPACs (for the most part). The market breathed a sigh of relief – or so we thought.

It appears that nearly all market participants did not notice this significant change.

In fact, Delaware-domiciled SPACs continued to trade at discounts to Cayman-domiciled SPACs. If the market were efficient, these two prices would have converged.

The alpha trade is that Delaware-domiciled SPACs continue to trade at average yields 138 bps higher than Cayman SPACs, despite eliminating excise tax risk. 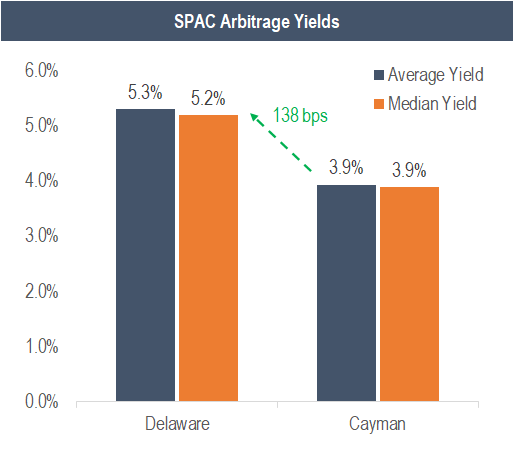 Ergo, we have been aggressively buying Delaware SPACs at above-average arbitrage yields over the past several days in the Accelerate Arbitrage Fund (TSX: ARB). We do not know how long this inefficiency will last, but we are happy to capitalize on it as it currently exists. 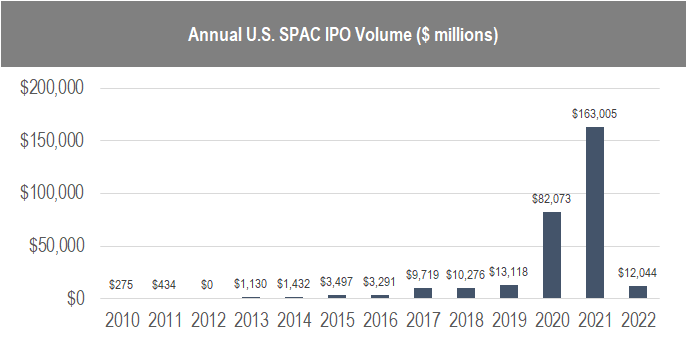 The dramatic drop in new issuance came as no surprise. Recessionary conditions, an equity bear market, and a dramatically oversupplied blank check market can all be pointed to as causes of the dramatic decline. Most expected the activity in 2020 and 2021 was unsustainable.

We expect issuance to continue to drop and forecast cumulative SPAC IPOs of $6 to $8 billion in 2023. 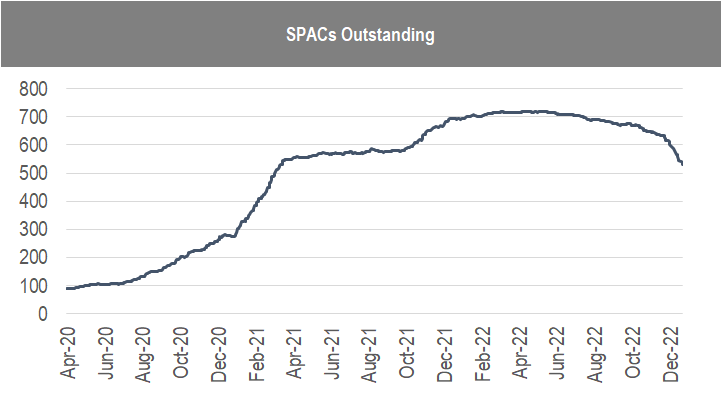 We forecast a balanced market at about 100 SPACs in the market, and therefore, we expect the number of vehicles outstanding to continue to drop over the next year.

With a more balanced market, we expect to see the baby-with-the-bathwater dynamic to fade away. This dynamic caused all SPAC mergers, irrespective of quality, to trade at a discount to NAV and suffer heavy redemptions. With far fewer vehicles outstanding, the market will better discern the good from the bad, and allow some SPACs to trade above NAV. The “upside optionality” trade on an attractive business combination announcement will return in 2023.

SPAC arbitrage yields began the year at 2.4% and ended 2022 roughly double that. Against the headwinds of rising yields, the index’s performance was roughly flat this year, buoyed by the low duration of SPAC arbitrage. 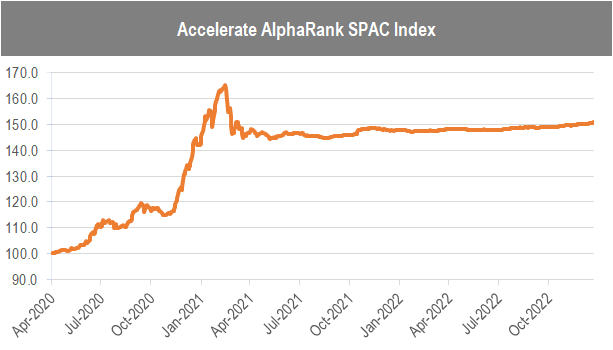 In an environment where both stocks and bonds suffered double-digit losses, perhaps a flat performance is not so bad. The main appeal of SPAC arbitrage is its downside protection.

One area that saw no stability was SPAC warrants. Coming into 2022, no one forecasted the devastation in this market segment. 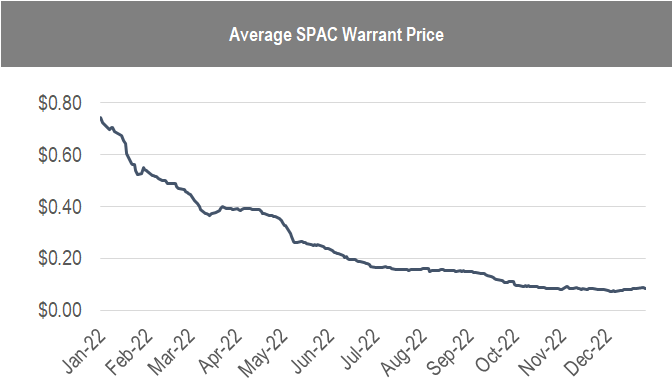 Spurred by the significant increase in liquidations, along with the bear market in stocks, the SPAC warrant index dropped a stunning 90% this year, with no relief bounce in sight. A relatively easy prediction for 2023 is a bit of mean reversion in SPAC warrants, with prices recovering somewhat.

The SPAC market has undergone dramatic changes over the past 3 years, from backwater to frontpage news to niche asset class. Regarding its future, we are fairly confident that this asset class will continue to provide an attractive risk-reward profile for conservative investors. Disclaimer: This research does not constitute investment, legal or tax advice. Data provided in this research should not be viewed as a recommendation or solicitation of an offer to buy or sell any securities or investment strategies. The information in this research is based on current market conditions and may fluctuate and change in the future. No representation or warranty, expressed or implied, is made on behalf of Accelerate as to the accuracy or completeness of the information contained herein. Accelerate does not accept any liability for any direct, indirect or consequential loss or damage suffered by any person as a result of relying on all or any part of this research and any liability is expressly disclaimed. Accelerate may have positions in securities mentioned. Past performance is not indicative of future results.
FacebookTweetLinkedIn
Share Tweet Share Pin