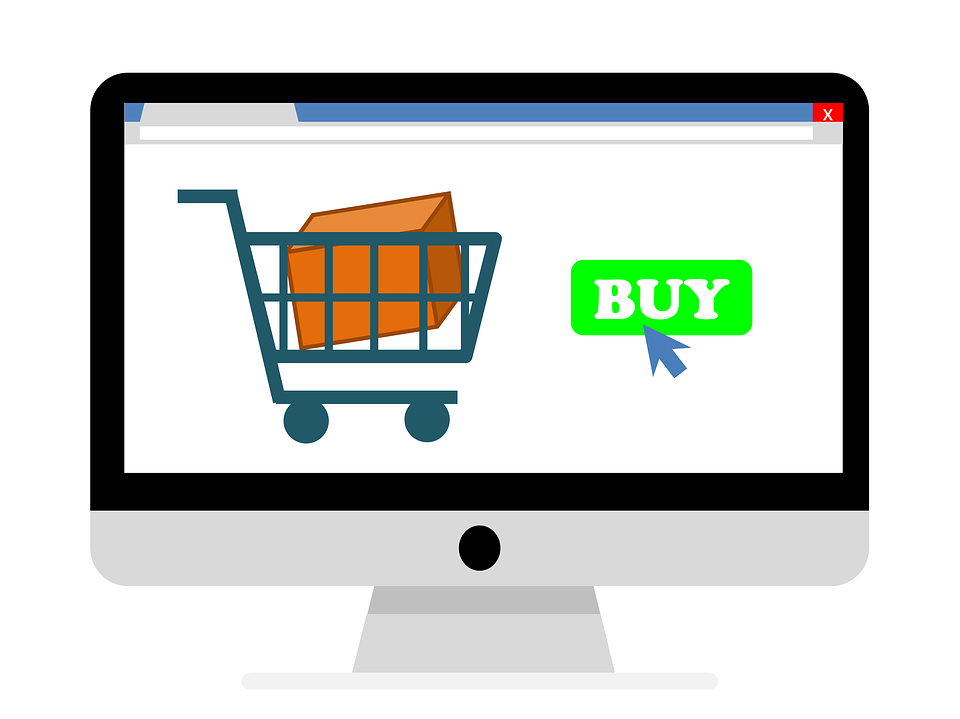 By Earl WebbDecember 28, 2022No Comments
FacebookTweetLinkedIn

December 28, 2022 – Boxing Day, celebrated on the day after Christmas, is a public holiday in many countries, including Canada, the United Kingdom, and Australia. It is a day when many retailers offer their best sales, and consumers take advantage of discounts to make it the biggest shopping day of the year.

I battled the crowds this Boxing Day to pick up some gifts for my family. While the crowds seemingly get smaller each year (online shopping for the win), the “door crashers”, or limited supply deals only available in-store, still manage to draw out throngs of people.

One of the deals I was able to secure was a new computer monitor at a 40% discount. Given the prices I saw for consumer products available, there is no doubt that Boxing Day is the best time to buy a wide range of products, including clothing, electronics, and home goods.

For consumers, the right time to buy household items is clear. For corporate acquirors, the best time to make an acquisition is up for debate.

These days, when a merger is publicly announced, it occasionally features a go-shop provision.

Well, it does not represent permission to blow the budget on Boxing Day shopping deals.

A go-shop provision is a clause included in the terms of a definitive merger agreement that allows the target company to actively solicit alternative acquisition proposals from other potential buyers during a specified period after the original merger agreement has been signed.

The go-shop provision typically specifies a time frame during which the target company can seek out other potential buyers and negotiate a potential superior proposal with them. If the target company is able to secure a better price from another buyer during this period, an “overbid” in M&A parlance, it can terminate the original agreement and accept the new offer instead. Typically, if the initial deal is terminated for a superior proposal during the go-shop period, a lower break fee is paid to the initial bidder (if they choose not to match).

Does a Go-Shop Present an Opportunity for Investors?

When an M&A deal is announced, arbitrageurs’ ears tend to perk up when a go-shop provision is included as part of the transaction. As a result, these deals tend to trade at tighter merger arbitrage spreads or even a premium to the friendly bid on occasion, as the market prices in the upside optionality of a potential bidding war. Typically, investors are willing to settle for a lower arbitrage yield in deals with go-shops in exchange for a chance of a higher consideration paid as a result of the provision.

But is this go-shop-driven market exuberance justified by the data? Are investors right to pay higher prices for M&A targets with go-shops? 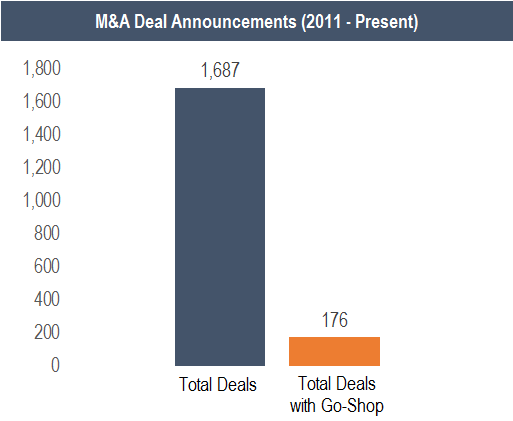 Historically, approximately 5.0% of total announced deals result in a higher consideration for the target’s shareholders, either from an interloper paying a higher price or the initial bidder raising its bid.

In comparison, of the 176 announced deals that included a go-shop provision in the merger agreement since 2011, nearly 10% resulted in a higher bid for the target. 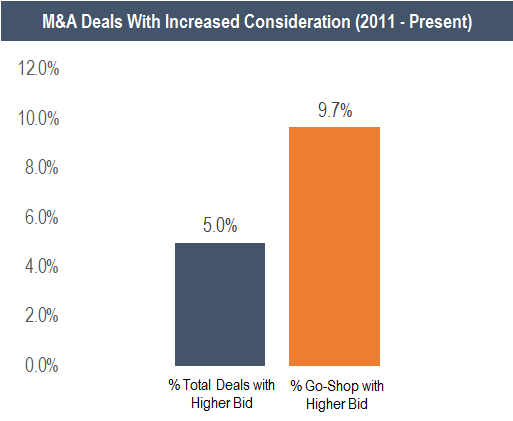 While the existence of a go-shop provision has resulted in nearly double the increased bid rate, the historical probability of a higher consideration paid to the target company shareholders due to a go-shop rises from just 5% to 10%. From an arbitrageur’s perspective, this 5% delta generally is not worth paying a significantly higher price (alternatively, accepting a lower arbitrage yield) because of a go-shop provision in a definitive merger agreement. However, the upside optionality that a go-shop introduces, raising the probability of an overbid by 500bps, is maybe worth paying a little bit of a tighter spread.

Deal activity in 2022 was satisfactory. While 180 public mergers announced in the U.S. this year were down roughly 10% from last year’s deal frenzy, M&A bankers remained busy as 43% more deals were announced this year compared to 2020. 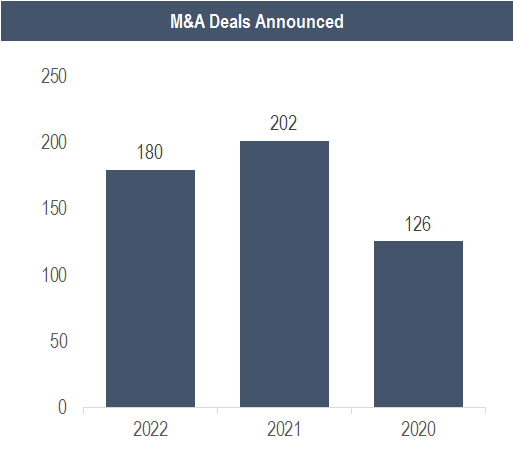 Historically, 5% of merger fails to close. This year, about 4% of deals were terminated, in line with last year and a 320 bps improvement compared to 2021. At 100 bps better than the historical deal termination rate, 2022’s break rate was slightly better than average. 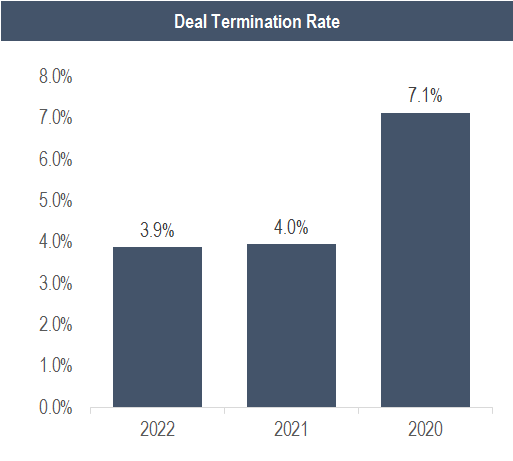 However, merger arbitrage hit a couple of hurdles this year.

First, the increased bid rate was low, with just 2.2% of transactions seeing a higher bid for the target company either through an interloper offering a higher consideration or the initial bidder increasing the price paid. This year’s increased bid rate was 30 bps lower than last year’s and nearly 100 bps lower than 2020’s. Historically, approximately 5% of deals result in a higher consideration paid to the target company’s shareholders, and this year’s rate was less than half of that. 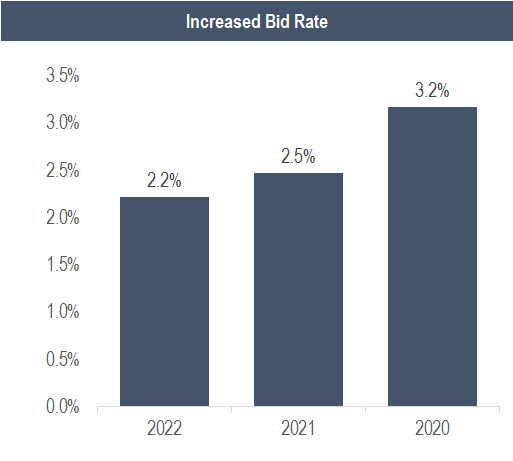 Given that a material portion of a merger arbitrageur’s annual return comes from increased bids, deal activity regarding competitive auctions was disappointing and led to less-than-stellar returns.

Arbitrage yields rose from 8% at the end of 2021 to nearly 11%. Although the average merger has a duration of just four months, a rising rate environment still presents a headwind, although far less than traditional fixed-income investments. In addition, the rising Fed funds rate increased funding costs for merger arbitrageurs, causing spreads to widen and borrowing costs to increase, negatively affecting arbitrage funds’ profit and loss statements. 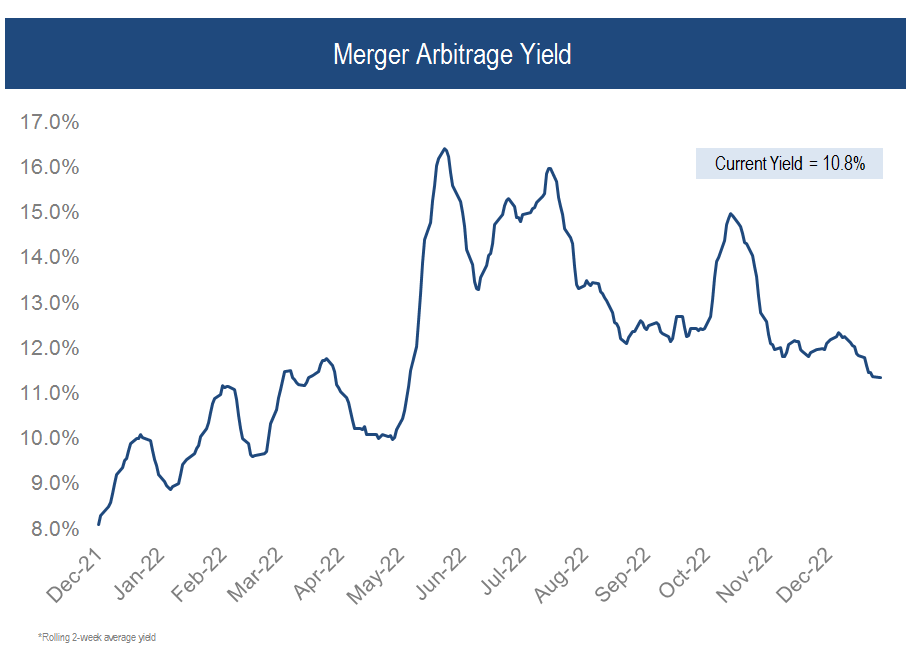 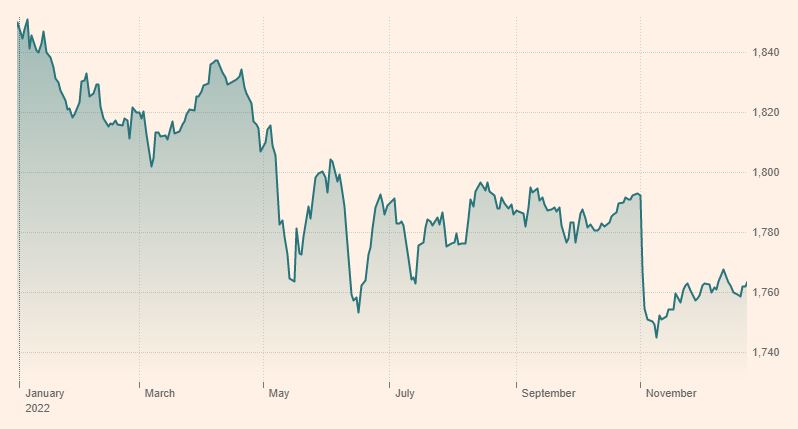 In any event, we are entering 2023 with 70 public M&A deals in the U.S. and 8 in Canada, along with average merger arbitrage yields above 10%. In addition, funding costs appear to be stabilizing as central banks downshift their rate-hiking cycles. We remain hopeful of a return to greatness in the arbitrage market.

Here is to a prosperous 2023 in merger arbitrage. 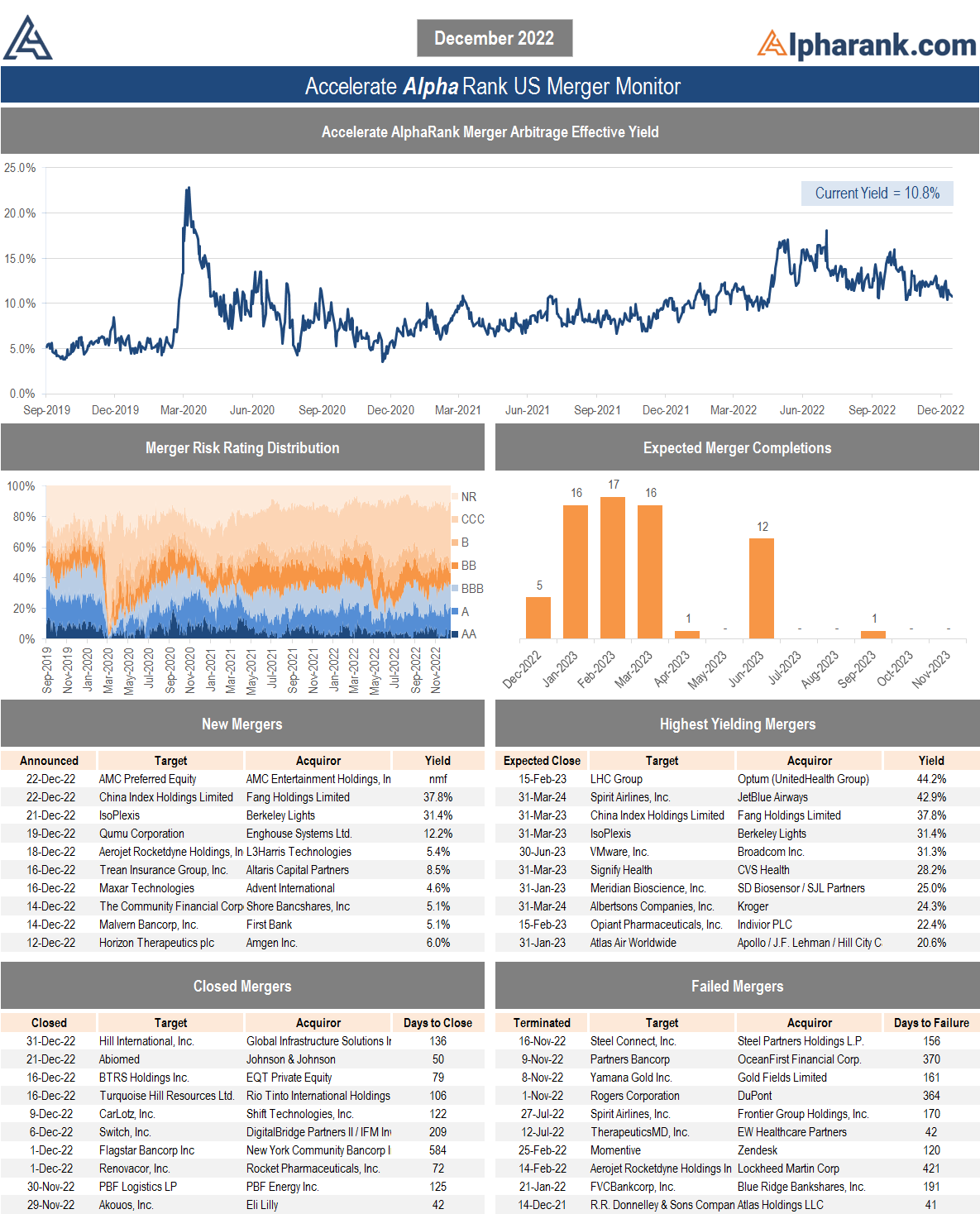 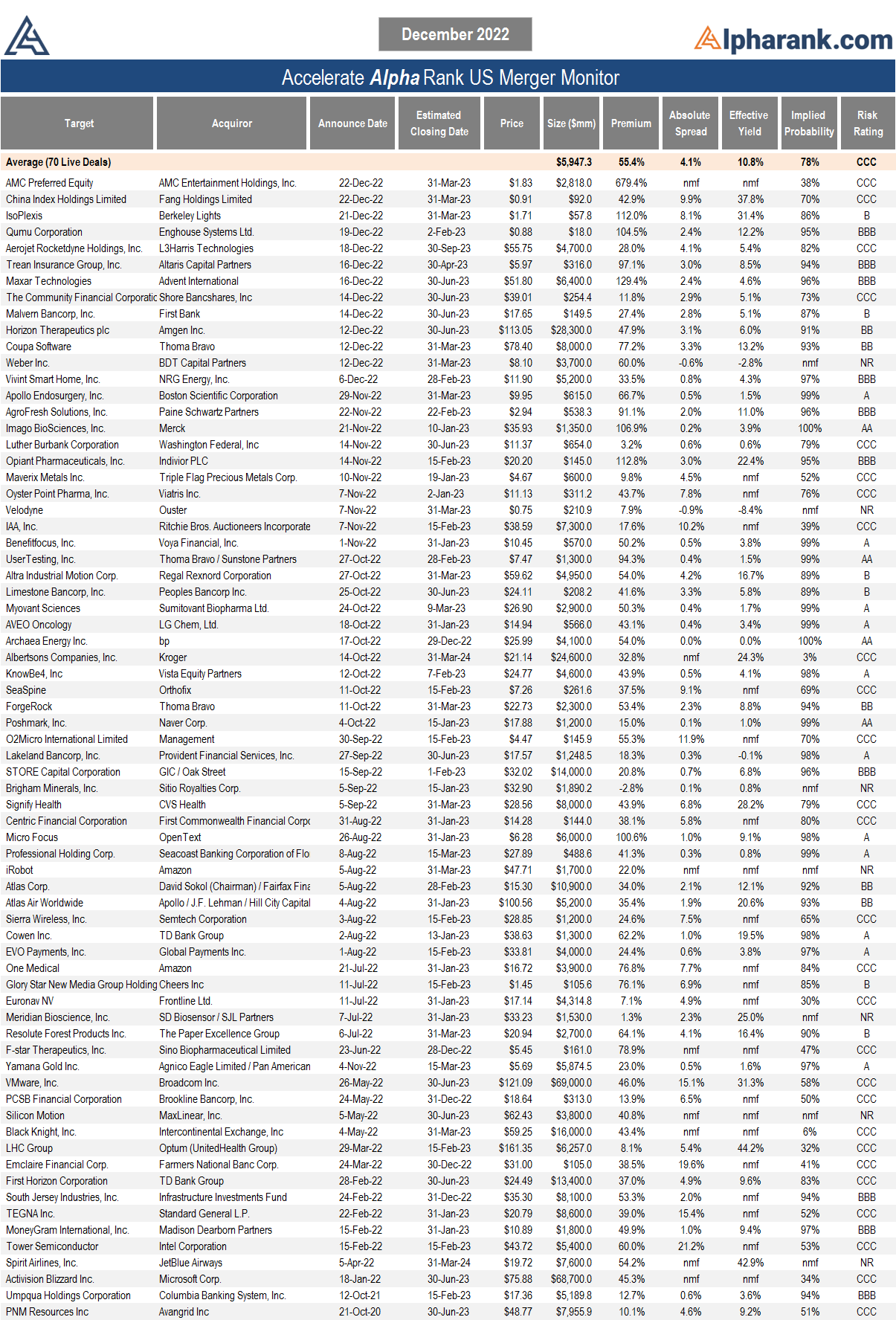