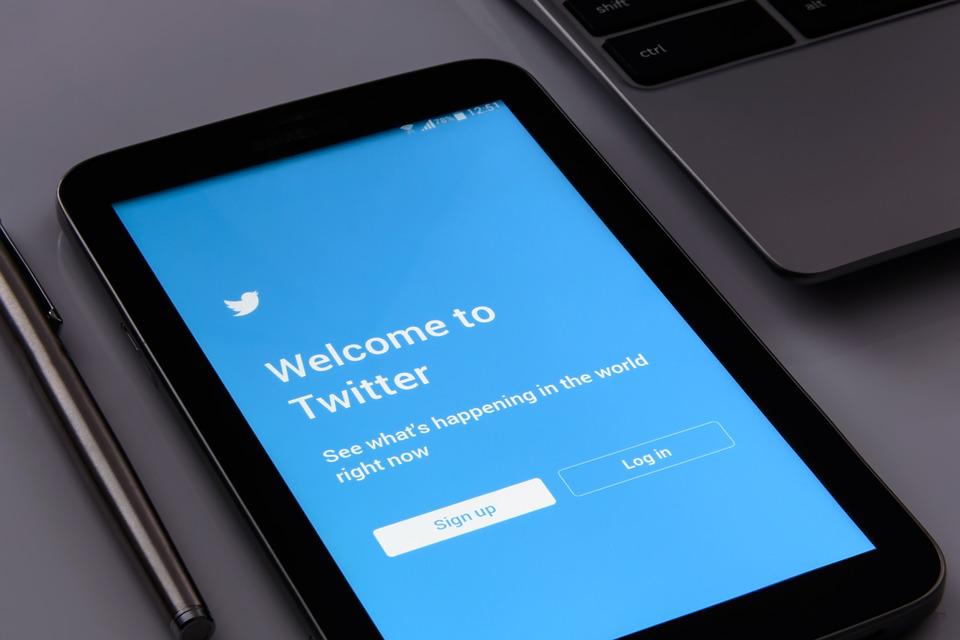 By Damon StreuberApril 28, 2022No Comments
Facebook0Tweet0LinkedIn0

After much market speculation, on Monday, Elon Musk inked a definitive agreement to acquire Twitter.

The acquisition price came in at $54.20 cash per share, representing a 37.9% premium and an enterprise value of $44 billion.

No, Elon does not currently own Twitter. However, he may own the bird app in five months or so.

Currently, Elon does own some of the social media platform. Just weeks ago, it was disclosed that he owns 73.1 million Twitter shares, representing a 9.6% stake in the corporation. He has signed an agreement to acquire all the shares he does not own, subject to shareholder and regulatory approvals.

There are several fascinating details in this transaction.

First is the sheer size of the deal. Musk’s acquisition of Twitter represents the largest leveraged buyout in history (by a longshot). Prior to Musk’s announced $44 billion buyout, the previous record for the biggest LBO was a private equity consortium’s $32.1 billion go-private of TXU. 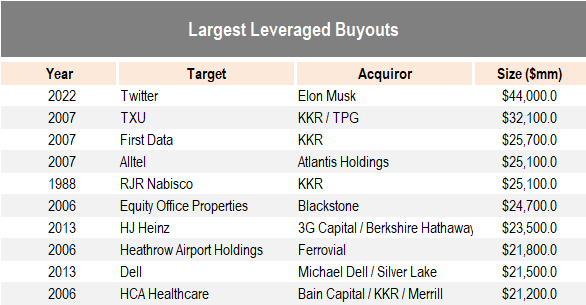 It is notable that in 2014, TXU filed for bankruptcy, weighed down by more than $40 billion in debt accumulated from the buyout and its struggling operations.

Second, the Twitter arbitrage spread is unwieldy, widening at a rapid and chaotic pace. It is too large to be controlled by the arbitrage community. The spread is pricing in a 40% odds of deal failure while rewarding brave arbitrageurs with a potential 31% yield if the deal closes successfully by September 30th. 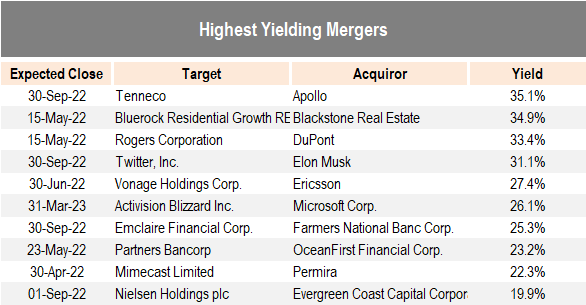 Third, many wonder why the market is ascribing only a 60% odds of Musk successfully acquiring Twitter?

The devil is in the details.

Obviously, a $44 billion acquisition represents the largest purchase by one individual.

Financing the $44 billion acquisition of a business that is expected to produce $1.4 billion of EBITDA this year requires creative solutions. And on this deal, the financiers got creative.

The financing for Musk’s leveraged buyout of Twitter consists of:

A notable component is the $21 billion equity component of the financing. Specifically, $21 billion is a lot of money, even for the world’s wealthiest person. There is no insight as to where this $21 billion is coming from, given that Mr. Musk is not a sovereign wealth fund or a private equity firm.

The $13 billion of debt, supported by $1.4 billion of EBITDA represents a sky-high leverage multiple of 9.3x debt-to-EBITDA. However, that is not the most noteworthy feature of the debt financing. Specifically, the $12.5 billion margin loan will make a risk manager’s ears perk up.

The collateral for the $12.5 billion margin loan is Musk’s shares of Tesla, a notoriously volatile automobile manufacturer. Currently, Musk’s 16.7% stake in Tesla is worth $155 billion. The lenders require a loan-to-value of 20% upon deal closing, meaning he will be required to put up at least $62.5 billion of unencumbered Tesla shares as collateral. In addition, there would be a margin call at an LTV of 35%, representing a -43% decline in the value of the collateral (Tesla stock).

From a risk perspective, there are three major hurdles in a leveraged buyout:

Although the financing is not explicitly a condition for the merger, if the money is not available, then the deal cannot close.While a definitive agreement is notoriously difficult to wriggle out of, it is not inconceivable. Historically, 6% of announced deals have broken, while 94% have been completed successfully. Furthermore, with respect to completed deals, 1% have had their terms revised downward. 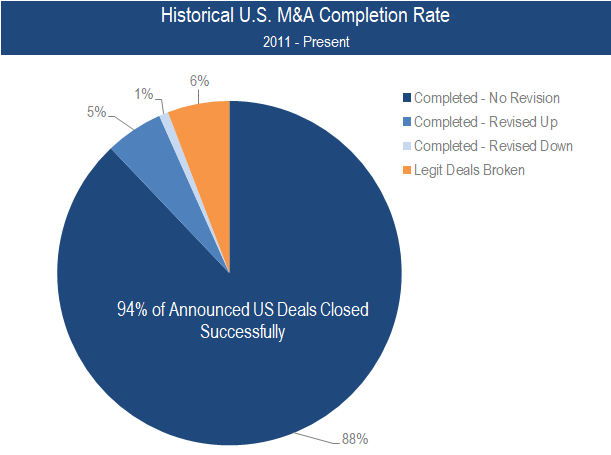 The Twitter / Musk deal currently presents investors with a potential 31% arbitrage yield if it closes in five months. However, at the current price, the market is implying just a 60% chance of completion, compared to an average of 85% for the deal universe.

The investment strategy is called risk arbitrage for a reason. While the prospective returns can be extremely attractive, especially in a low interest rate environment, it is essential to astutely manage risks.

And Musk’s historic leveraged buyout of Twitter has it in spades.