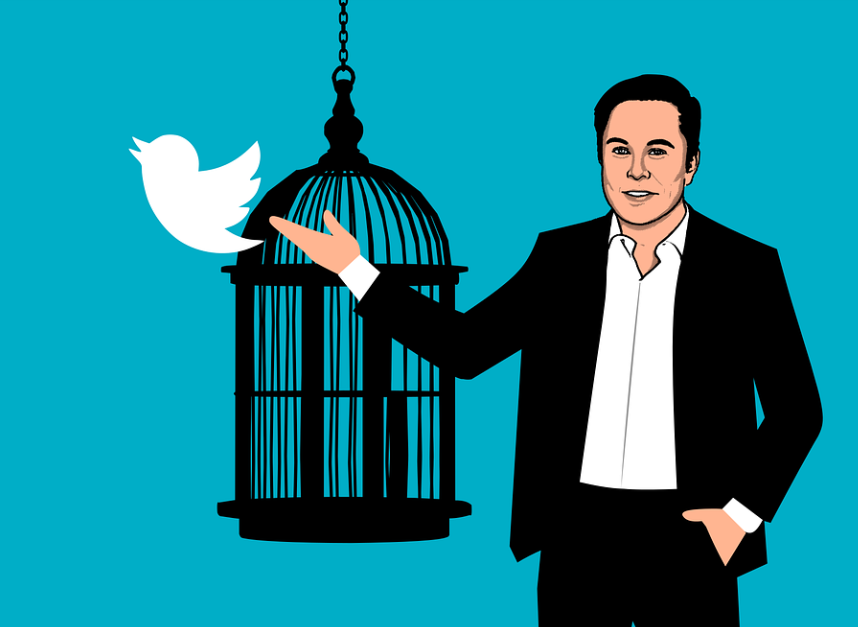 By Damon StreuberJuly 27, 2022No Comments
Facebook0Tweet0LinkedIn0

July 27, 2022 – In April’s Merger Monitor, I detailed why we did not hold a position in the Twitter merger arbitrage for the Accelerate Arbitrage Fund (TSX: ARB).

Specifically, the sheer size of the deal and the shockingly high amount of leverage involved would give any seasoned arbitrageur reason for pause.

At $44 billion, Musk’s proposed acquisition of Twitter would be the largest leveraged buyout in history by a longshot. 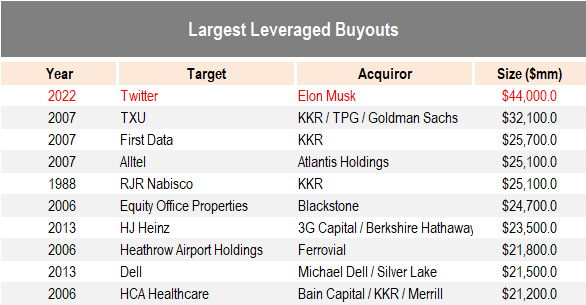 While mergers and acquisitions are generally difficult to navigate, the world’s largest LBO, by one person no less, would be very tricky. The larger the transaction, the more things there are to go wrong.

As such, the probability of an M&A deal break has historically been inversely correlated to the size of the transaction.

Over the past decade, large-cap mergers had 3.4x the failure rate of small-cap deals.

It doesn’t help the case for large leveraged buyouts that in 2014 the biggest LBO in history, TXU, filed for bankruptcy.

Massive M&A deals take longer, require more financing, and have enhanced regulatory issues, that are magnified due to their size. In addition, size amplifies dollars lost due to unfavourable market movements, which can cause would-be acquirors to have a change of heart.

Speaking of having a change of heart, Elon Musk purported to terminate his acquisition of Twitter, claiming that Twitter breached the merger agreement by failing to operate in the ordinary course in addition to suffering a material adverse effect (MAE) given the potential existence of bots in excess of Twitter’s assumptions, a laughable assertion.

One issue is that an MAE has only been successfully proven once in history, allowing an acquiror to wriggle out of a deal. In that case (Akorn v. Fresenius Kabi), the target’s business and financial results “fell off a cliff”, with revenue dropping approximately 30% and net income dropping over 80% since entering the merger agreement. Accordingly, an alleged MAE must “substantially threaten the overall earnings potential of the target company in a durationally significant manner” (measured in years, not months) and cannot be a “short-term hiccup.” Looking at Twitter’s financial results, one can see that this clearly is not the case (even for a non-lawyer like me!).

In any event, Twitter disagreed with the deal termination notice and sued to compel Musk to complete the acquisition at $54.20 per share.

Historically, a lawsuit has preceded a price concession, with the parties agreeing to lower the deal consideration and successfully closing the transaction as the most likely scenario. However, even when the target has a solid case and a tight merger agreement, they typically settle with a small price concession to evade the uncertainty of court and account for the time value of money (litigation can take a while).

During the last recession, just over two years ago, several deals went through turbulence but ultimately closed successfully at a lower price. 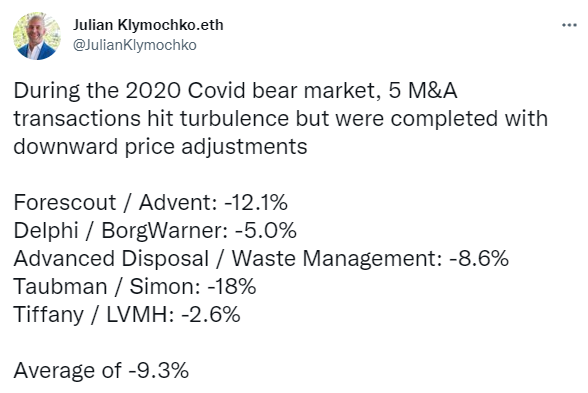 Musk’s case for deal termination has more holes than Swiss cheese, so the odds of him succeeding in court with no penalty are fairly low.

A price concession is the most likely scenario in the Twitter/Musk drama. A basic scenario analysis presented below details why Twitter stock is trading at around $38.00.

Outside of the dispute between the bird app and the world’s richest man (and prolific tweeter), things are very normal in M&A.

Over the past month, seventeen deals worth nearly $30 billion were announced in North American public markets. Twenty mergers worth $70 billion closed during the period while one failed. This deal failure was not due to regulatory or financing issues, but simply because an insufficient number of shares were tendered into the offer so the acquiror walked away.

Merger yields remain high at 13.8%, however, they have come down slightly since June’s peak.

While we do not hold a position in Twitter long or short, it remains an important event to cover, given its precedent-setting nature. While we assume a negotiated settlement is most likely, either a deal on reduced terms of a large financial settlement far in excess of the reverse break fee, the long-shot scenario in which Musk is allowed to wriggle out of the deal with no repercussions would be negative for the M&A market specifically and bad for the equity markets in general.

The Twitter/Musk trial is set for October, so grab your popcorn.