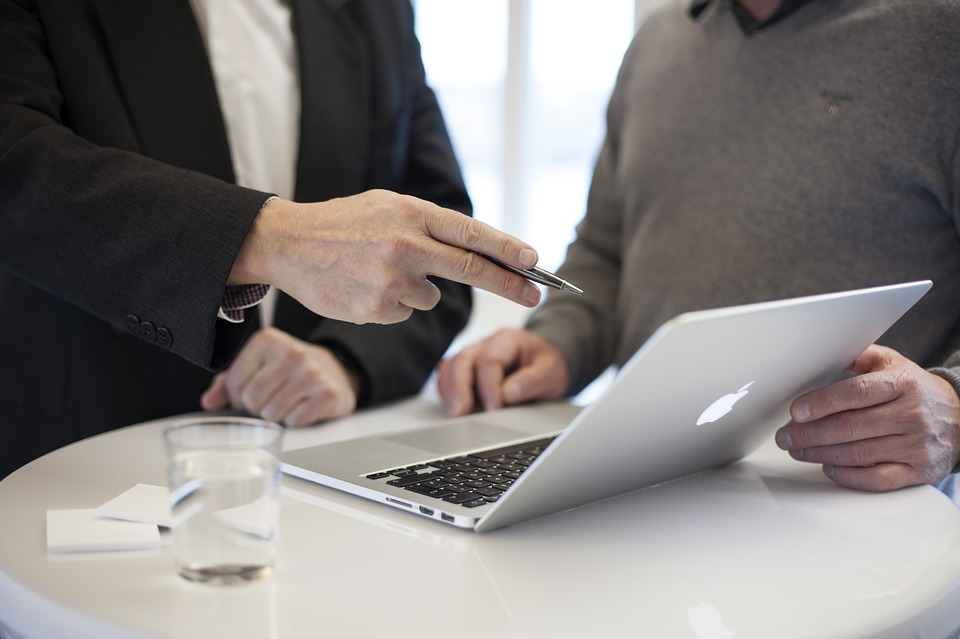 Your Private Equity Fund is Down -37% This Year. Where Do We Go From Here?

April 22, 2020 – Nearly 2,000 years ago, the ancient Roman writer Pliny the Elder first wrote that ostriches, when threatened, would bury their heads in the sand in an ill-advised attempt to hide from potential predators.

The would-be myth of ostriches burying their heads in the sand is an oft-used metaphor for humans ignoring essential facts in the hope that these issues will just go away. Ignorance is bliss, as they say.

The coronavirus pandemic has caused the values of most investments to decline dramatically. No asset class has been spared from the bloodletting during the current global recession. Specific segments of the market have held up better than others, such as large cap growth. Surprisingly, Microsoft and Amazon have been bastions of safety in the current market carnage. Others, such as small cap value, have been bludgeoned throughout the COVID-19 related sell-off.

Certain investment managers have been slower to update investors with their performance than others. Specifically, the private equity industry has the luxury of updating investors on a much-delayed basis after the recent bear market, given the private equity industry’s lack of true mark-to-market valuations and reliance on mark-to-model asset pricing in which they are given vast latitude to select the return figures they disclose to investors. We have written extensively on how the use of mark-to-model valuations unrealistically smooths returns in an attempt to mask the inherent risk and volatility of leveraged buyout fund strategies.

That’s why we wouldn’t be surprised to see leveraged buyout firms disclose relatively good performance figures in the first quarter of 2020. While private equity firms cannot ignore reality and comparable public company valuations forever, they can do their best to keep investors oblivious to the dramatic reduction in values of their private equity portfolios.

“An OCIO just told me the write-downs are going to be so bad in private equity funds in the first quarter that many general partners plan to do them over two quarters to smooth the returns.”

As first discovered by Harvard Business School professor Erik Stafford in 2015, private equity can be defined as leveraged small cap value investing. Intuitively, this three-factor model makes sense. First, leveraged buyouts are generally conducted on small companies, significantly smaller than the average S&P 500 business. Historically, small capitalization stocks have outperformed (known as the small cap anomaly). Second, leveraged buyouts are typically executed at lower EBITDA multiples than the S&P 500. Historically, stocks with lower valuations have outperformed (known as the value anomaly). Third, adding leverage amplifies returns. If one were to concoct a formula to generate long-term market-beating returns, private equity would be it.

A simple multi-factor approach using value, size and leverage can be utilized to replicate private equity returns. Under this definition, private equity declined by -37% in the first quarter of 2020. 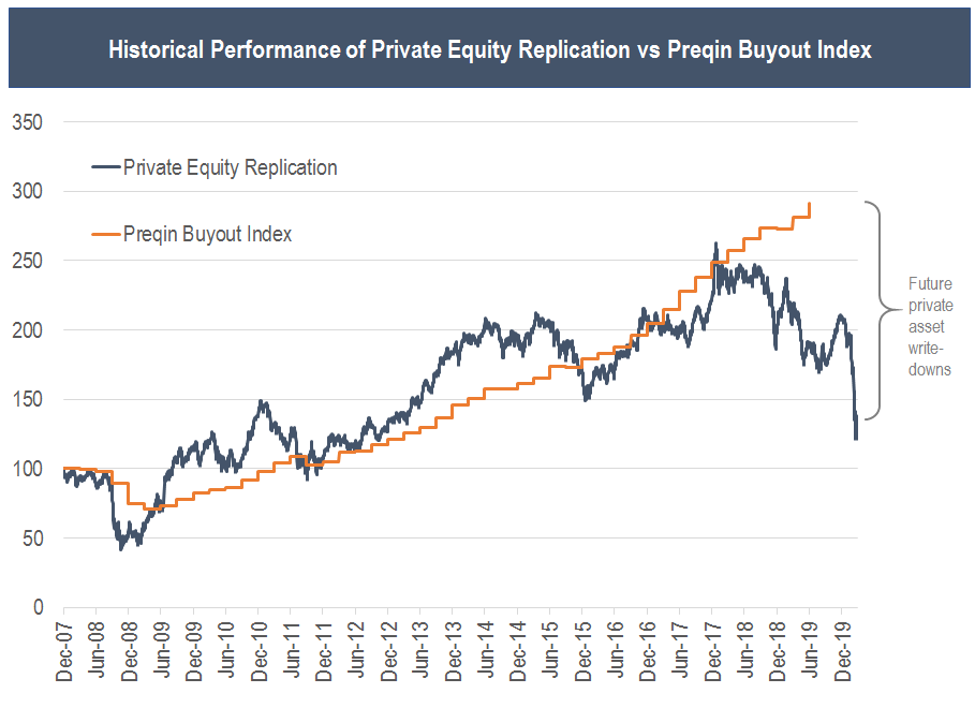 We just went through a swift bear market in Q1. In fact, it was the fastest decline from an all-time high to down -20% in history, taking only 10 trading sessions. Given the downward velocity and all-encompassing nature of the great coronavirus bear market, it isn’t surprising that leveraged small cap value stocks were taken out back to the woodshed. While traditional private equity funds haven’t yet taken the large required write-downs, they will have to in the future unless asset values recover quickly.

That Was Then, This is Now

There’s no use crying over spilled milk. Private equity portfolios have already dropped. In fact, instead of crying, one should be hopeful considering the current opportunity set.

Why should private equity investors be encouraged in the midst of a recession and coming off of a brutal first quarter?

For example, the U.S. suffered an economic recession from March 2001 until October 2001. From the market bottom during this recessionary period, the S&P 500 continued to struggle for several years. However, the private equity replication portfolio had a dramatic bounce back. 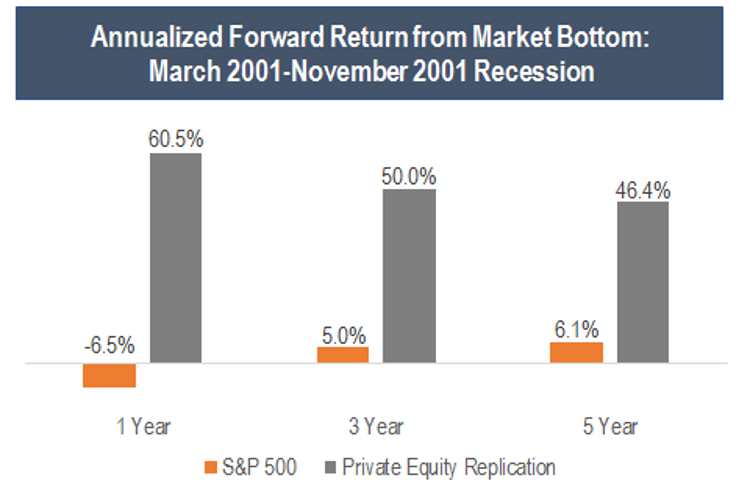 From the trough of the 2001 recession, the S&P 500 continued to decline over the next year even as the economy began to grow again. Meanwhile, the private equity replication portfolio was up over 60% in the 12 months from the bottom. Over the next five years, the S&P 500 returned a modest 6.1% annualized while the private equity investor made nearly 7-fold their money.

The private equity portfolio also had a stunning recovery from the Great Recession of 2008-2009. 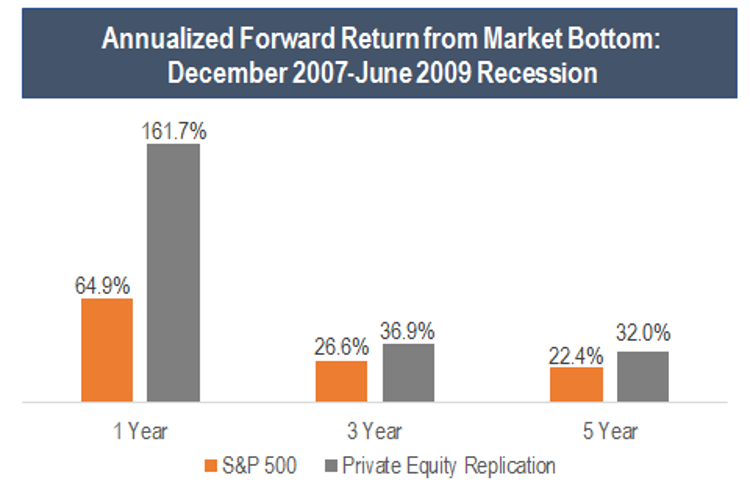 Private equity came screaming out of the gates as measured from the bottom of the last big recession, clocking in a 1-year return of over 160%, nearly triple that of the S&P 500. While the 175% total return over five years for the S&P 500 is nothing to sneeze at, it pales in comparison to private equity’s 301% return over that timeframe.

There’s no doubt that this year’s first quarter has been quite challenging for most investors and especially so for private equity. No need to stick your head in the sand though. Private equity returns, as expressed through leveraged small cap value stocks, have historically been extremely strong coming out of past recessions. Now could be an opportune time to allocate.