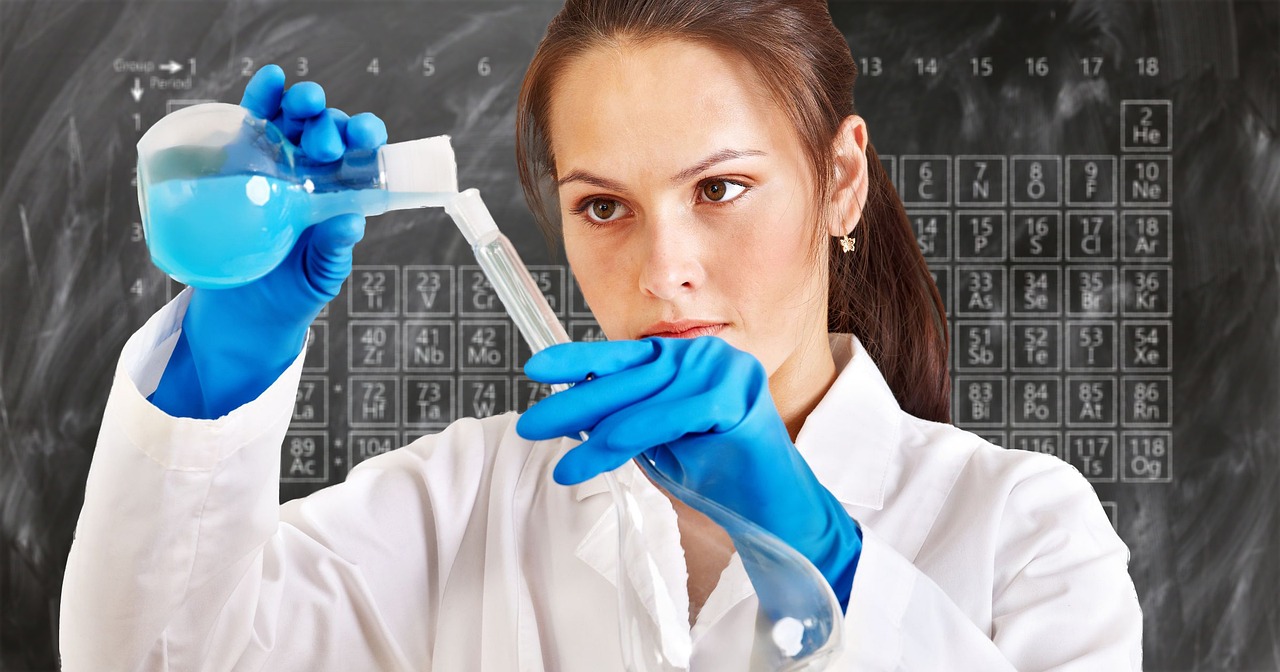 What Happens When We Combine Value And Momentum?

May 23, 2019 – One hundred and ten years ago, a successful laboratory experiment run by chemist Fritz Haber revolutionized the agricultural industry worldwide. In the experiment, Haber placed osmium in a steel chamber, pumped in a combination of both hydrogen and nitrogen gas, then applied pressure and heat. The result of the experiment was an outflow of ammonia, the raw material used to produce synthetic fertilizer.

Scientists had known that nitrogen was crucial for plant life, but prior to Haber’s experiment, there was no known way to produce it. The process of synthesizing and manufacturing ammonia from combining hydrogen and nitrogen, known as the Haber-Bosch process, was one of the most important technological discoveries of the 20th century. This synthesis of ammonia enabled widespread use of fertilizer, which substantially improved crop yields globally and provided more food for a rapidly growing global population. As a result, the world’s population rocketed from 1.6 billion to 6 billion over the 20th century.

This process of combining two unremarkable and ubiquitous elements into a new, far more practical compound is akin to modern-day alchemy.

The Haber-Bosch analogy can be applied to modern-day investing, by taking two common investment factors, value and momentum, and combine them to form a multi-factor model that results in higher risk-adjusted returns for an investor.

The value factor was first noted by Ben Graham and David Dodd in their 1934 book Security Analysis. A core concept in the text was that of a margin of safety, which referred to buying a stock at a discount to its intrinsic value. The notion of a margin of safety is synonymous with value investing.

In practice, value investing refers to buying a security at a discounted price. This discounted price is typically discerned by looking at various valuation metrics such as book-to-market, earnings yield or EBITDA-to-EV (where EBITDA stands for Earnings before interest, tax, depreciation and amortization and EV refers to Enterprise value).

The reason EBITDA-to-EV is preferred for a value factor? Performance, of course. 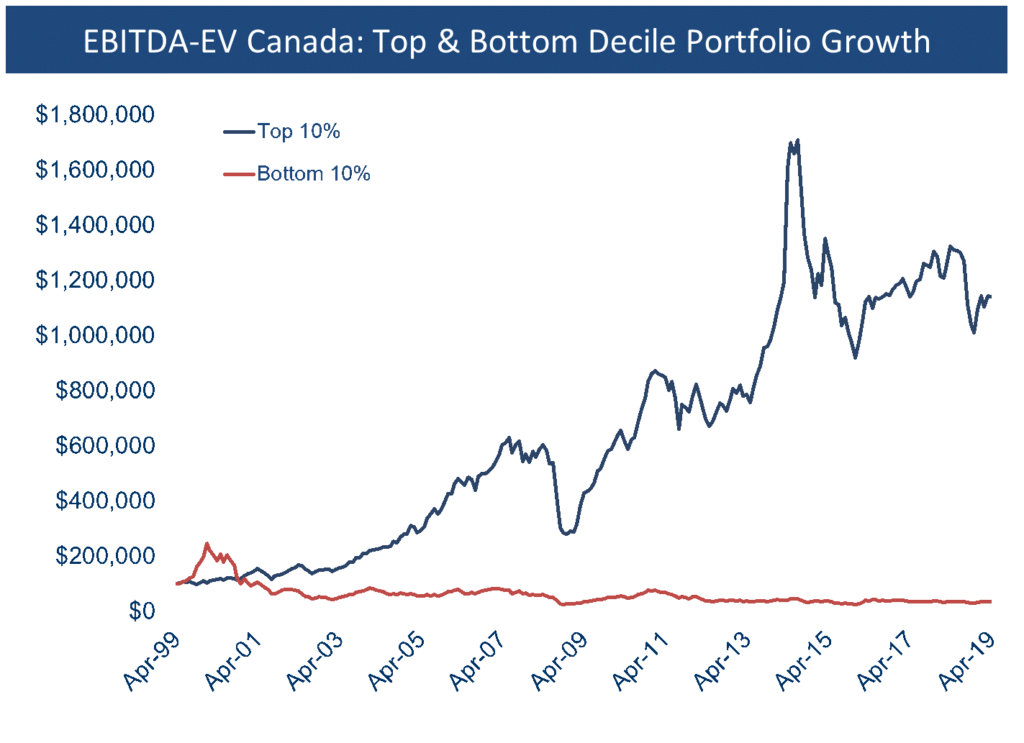 The top decile Canadian value stocks returned 12.9% annually with volatility of 21.5%. This resulted in a Sharpe ratio, or return per unit of risk, of 0.6. 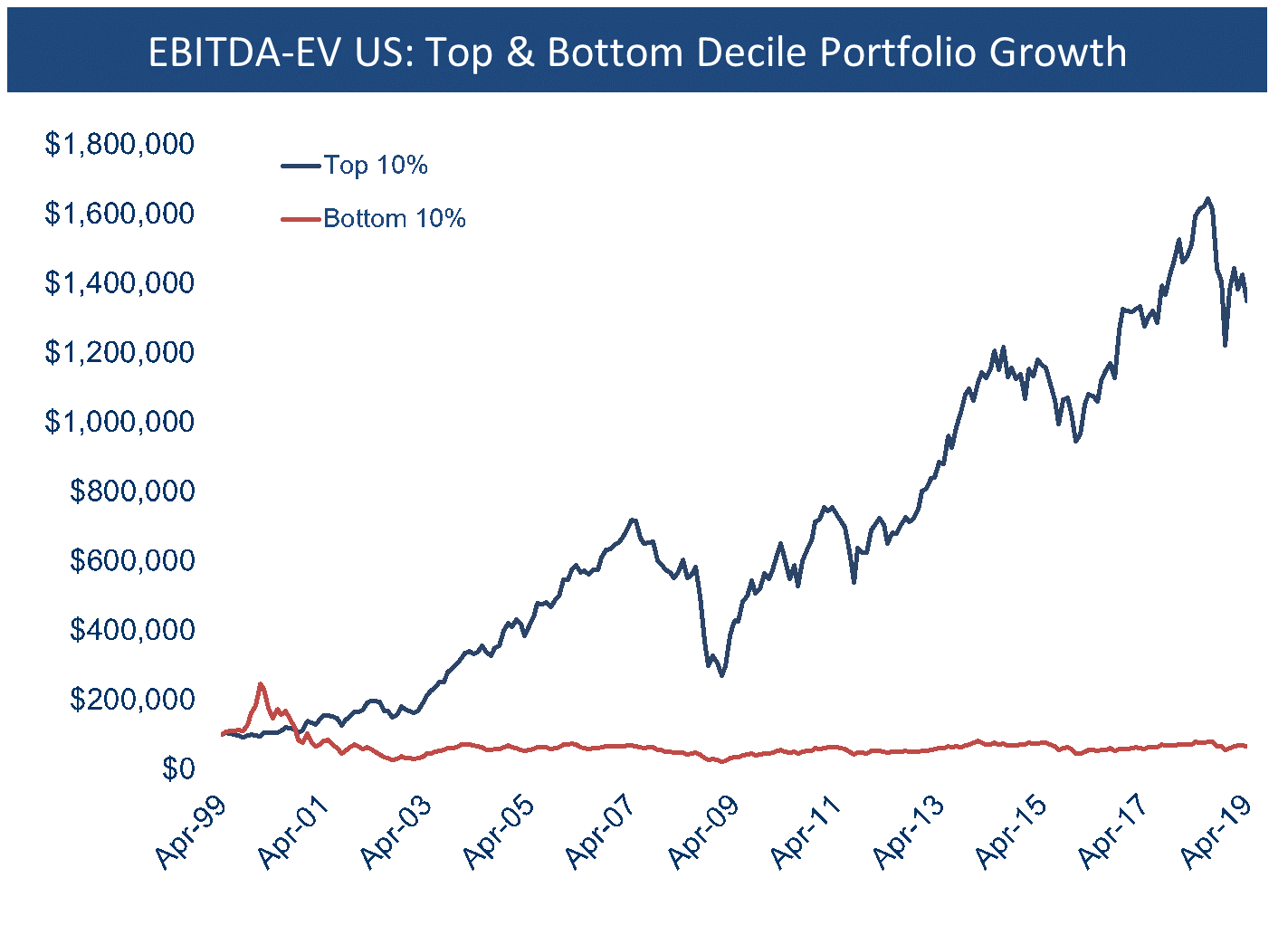 In the U.S market over the past 20 years, the top decile of value stocks (ie. the cheapest) based on EBITDA-to-EV returned 13.9% annually, while the bottom decile (ie. most expensive) returned -2.0% per year.

Historical performance shows that EBITDA-to-EV is a more robust factor in predicting future equity returns. Investors who would have utilized this metric could have generated impressive returns.

It’s no surprise that an entire industry, known as private equity, has grown from the use of the EBITDA multiple (the inverse of the EBITDA-to-EV metric). The private equity industry, borne of buying cheapest companies based on EBITDA and combining it with leverage, has now grown to a staggering $3.5 trillion in assets. The main driver in this breakneck growth has been performance, which can be mainly attributed to the EBITDA multiple in combination with leverage.

The momentum factor has been favoured by market traders and speculators for over a century. It was the preferred factor of famed speculator Jesse Livermore in the 1920s, as detailed in Edwin Lefevre’s 1923 literary classic “Reminiscences of a Stock Operator”.

One of Livermore’s rules of trading was to buy rising stocks and sell falling stocks. 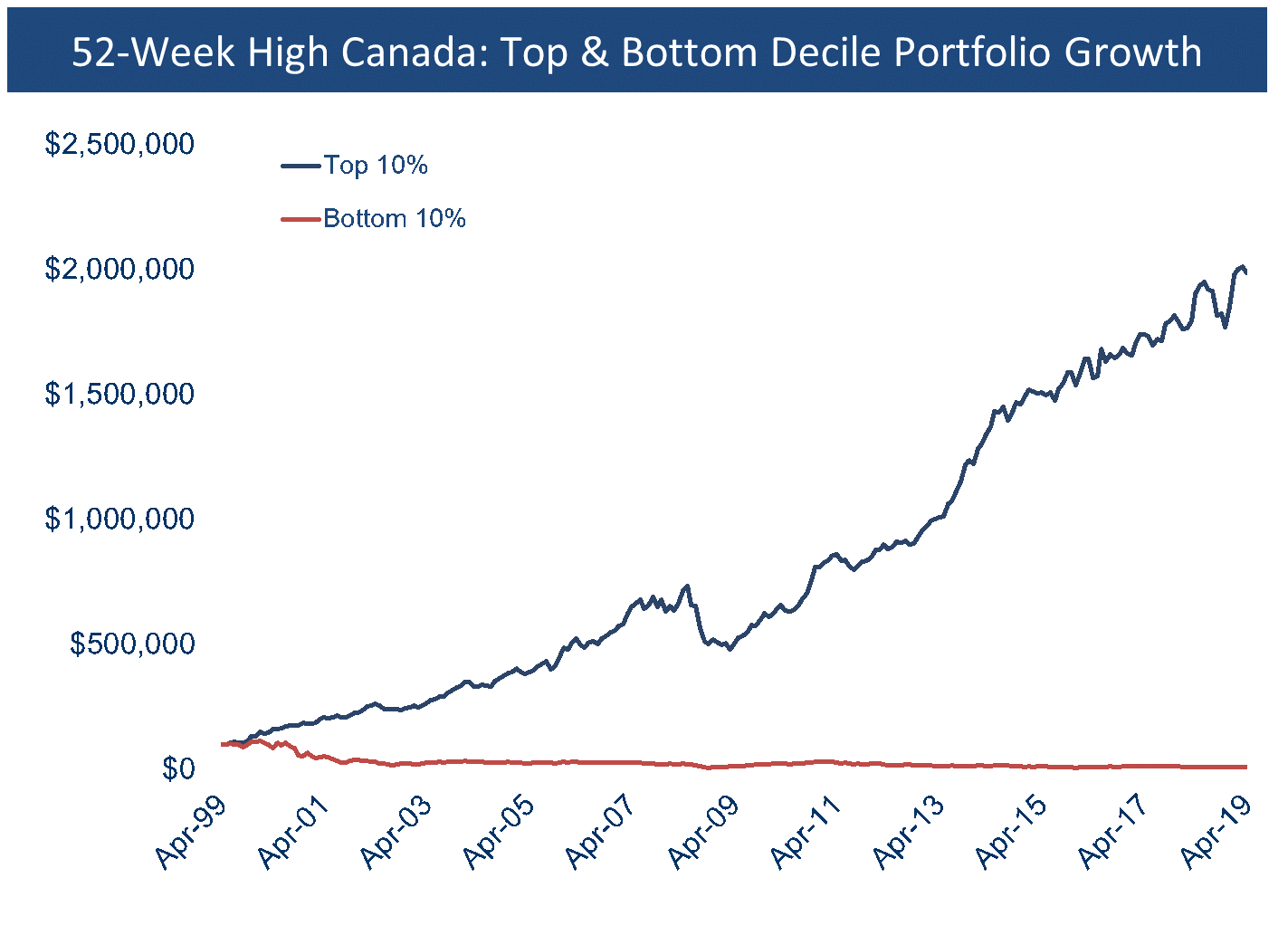 The top decile of Canadian momentum stocks returned 16.1% annually over the past 20 years with volatility of only 12.0%, resulting in a Sharpe ratio of 1.3. 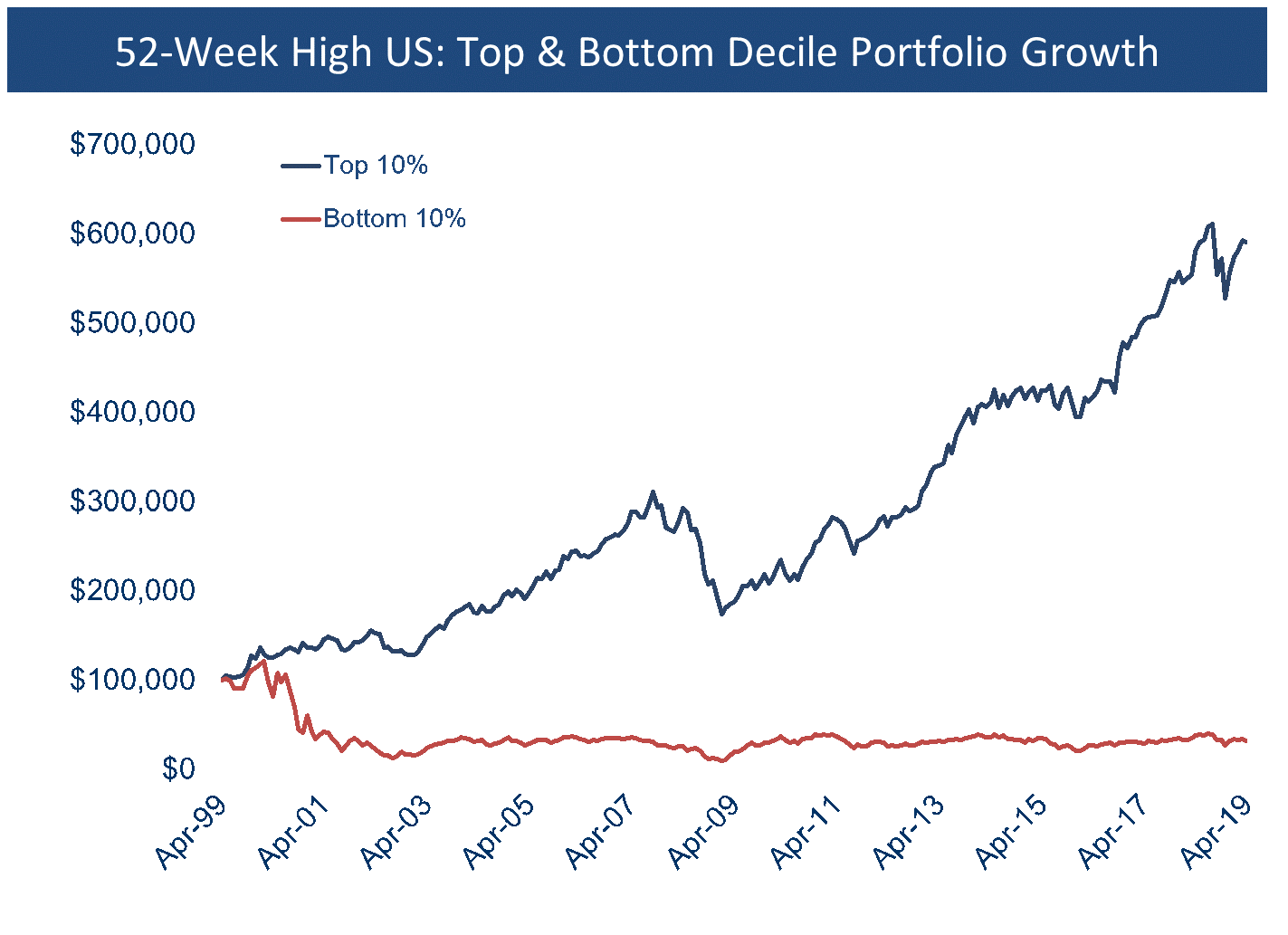 The top decile of U.S. momentum stocks returned 9.3% annually over the past two decades with a volatility of 12.6%, resulting in a Sharpe ratio of 0.7.

In the 1980s there was an animated television series called Voltron. It featured a team of space explorers that each piloted a robot lion vehicle. Each of these explorers were powerful on their own, but when required they would combine their robots to form super-robot Voltron, a powerful force.

Value and momentum are powerful in their own right. When combined, these factors can form like Voltron into a powerful multi-factor.

The result of this Voltron-esque combination of value and momentum? Better risk-adjusted returns. 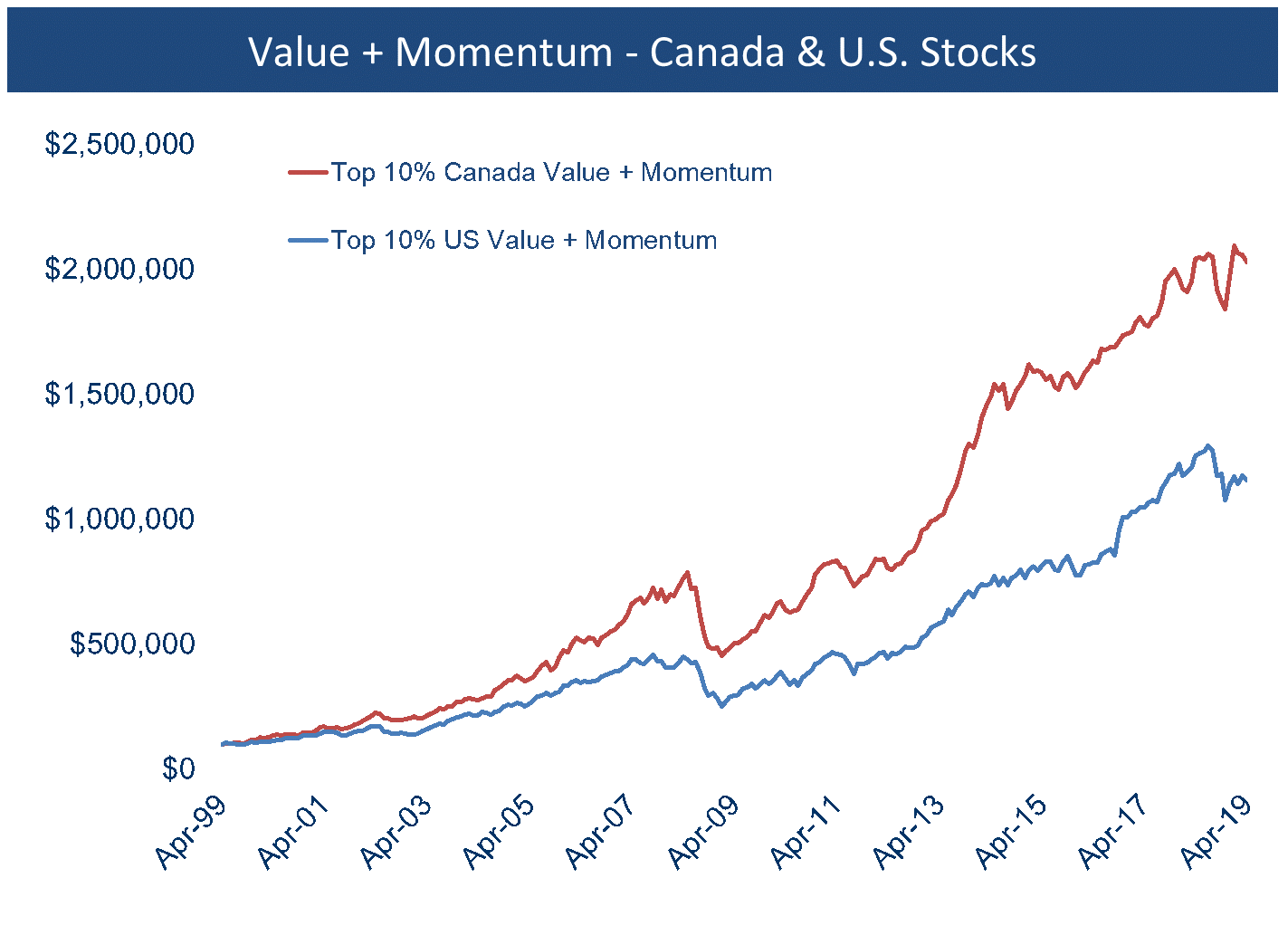 When the value and momentum factors are combined in Canada, the result is the highest returning portfolio at 16.2% over the past 20 years. On a risk-adjusted basis, the combined portfolio’s Sharpe, or return per unit of risk, ties the momentum strategy at 1.3.

In the U.S., when the value and momentum factors are combined, the result is the highest risk-adjusted return with a Sharpe of 0.9.

Chemist Fritz Haber combined nitrogen and hydrogen to form ammonia, which revolutionized agriculture and led to the supercharging of human population growth.

Similarly, an investor can combine the value and momentum factors to create a powerful, Voltron-like multi-factor that can lead to the supercharging of investment returns.