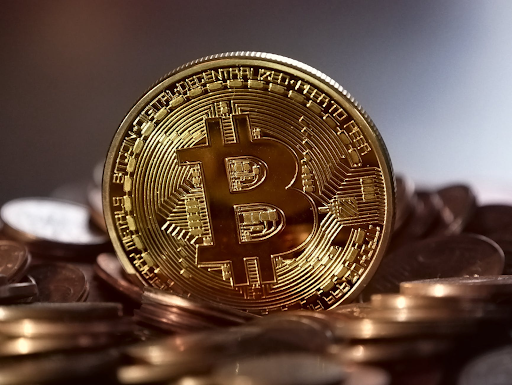 The Investment Case for Bitcoin: A Capital Allocator’s Perspective

By Mike KessleringAugust 18, 2020No Comments
Facebook0Tweet0LinkedIn0

August 18, 2020 – “In the beginning God created the heaven and the earth,” proclaims the Book of Genesis, the first book of the Old Testament. It is a profound revelation that sets the stage for the foundation of the faith. For the formation of a creed, there is only one genesis, and given its significance, the genesis’ substance must be deep-rooted and far-reaching.

Which brings me to the genesis of another belief system, and that is of Bitcoin. On January 3, 2009, the Bitcoin blockchain came to life with the creation of the “genesis block”. The first block on Bitcoin’s blockchain came during highly uncertain economic times, the depths of the Great Recession. On that fateful day, the genesis block came embedded with a message with a current event that signified the perilous and uncertain economic environment at the time:

During the depths of the global financial crisis of 2008-2009, a tremendous amount of monetary and fiscal stimulus (aka “money printing”) was implemented. Banks were being bailed out. Unemployment was sky high. The economy was in shambles.

The similarities between the global financial crisis of 2008-2009 and the coronavirus pandemic of 2020 are striking. Once again, there’s been a worldwide economic shock and a deep economic recession. To combat these adverse developments, governments and central banks around the world went into money printing mode, with tens of trillions of dollars of fiscal and monetary stimulus unleashed. Each time one hears the money printer go brrr, one’s faith in fiat currency diminishes.

Both crises featured a seminal development in the growth of the Bitcoin ecosystem. The initial creation of Bitcoin and the formation of its genesis block was the “big bang” event that led to the birth of the cryptocurrency in 2009.

The COVID19 crisis featured another critical event in the emergence of Bitcoin as an accepted investable asset class.

On August 11, 2020, we saw the first institutional investor make a substantial investment in Bitcoin. MicroStrategy, a publicly traded technology company with a $1.4 billion market capitalization, announced that it purchased 21,454 bitcoins for US$250 million. This amount represents 0.1% of all outstanding bitcoins and is the largest known institutional allocation to the asset class. MicroStrategy’s CEO, Michael J. Saylor, outlined the thesis behind the investment (emphasis mine):

“This investment reflects our belief that Bitcoin, as the world’s most widely-adopted cryptocurrency, is a dependable store of value and an attractive investment asset with more long-term appreciation potential than holding cash… MicroStrategy has recognized Bitcoin as a legitimate investment asset that can be superior to cash and accordingly has made Bitcoin the principal holding in its treasury reserve strategy.”

The statement represented a fundamental dogma in which most institutional investors have not yet recognized, which is that Bitcoin is a dependable and legitimate investable asset class.

Saylor continues, “Our decision to invest in Bitcoin at this time was driven in part by a confluence of macro factors affecting the economic and business landscape that we believe is creating long-term risks for our corporate treasury program ― risks that should be addressed proactively. Those macro factors include, among other things, the economic and public health crisis precipitated by COVID-19, unprecedented government financial stimulus measures including quantitative easing adopted around the world, and global political and economic uncertainty. We believe that, together, these and other factors may well have a significant depreciating effect on the long-term real value of fiat currencies and many other conventional asset types, including many of the assets traditionally held as part of corporate treasury operations.”

The concept of fiat currencies, or paper money not backed by an asset, is a new belief system that has existed for only a fraction of the time in which humans have engaged in commerce. Low inflation and stable values of fiat currencies should not be accepted as an unwavering principle of the economic system.

With the unprecedented and seemingly unending monetary and fiscal stimulus programmes occurring around the world, there is a risk of the rapid depreciation of fiat currencies. This rapid loss of value is not a highly certain outcome, however, it presents a risk in which investors should be aware of. In this case, MicroStrategy read the tea leaves and started to believe that rapid currency depreciation is a potentially high-probability event and that it would be irresponsible to keep a large portion of its balance sheet in cash.

History is littered with cases in which currencies have lost 100% of their value – Weimar Germany, Argentina, Zimbabwe, Venezuela, and on and on. Just as Ernest Hemingway stated, “How did you go bankrupt? Two ways. Gradually, then suddenly,” people can lose faith in a currency seemingly overnight.

Bitcoin from a Capital Allocator’s Perspective

A capital allocator’s role is to diversify against as much unsystematic risk as possible. The role includes protecting against “known unknowns”, which are uncertain events that may be predictable (i.e. inflation), and “unknown unknowns”, which are phenomena that cannot be expected because they have never happened before (i.e. a rapid and dramatic loss of value of the U.S. dollar).

They say that diversification is the only free lunch in investing. By diversification, capital allocators are looking for assets with positive expected returns and low, or zero / negative, correlation to traditional asset classes such as stocks or bonds.

Capital allocation involves the selection and weighting of various asset classes to create a diversified investment portfolio. This process consists of estimating a number of future characteristics of multiple investments, including expected return, volatility and correlation of specific assets. Given that the future return, volatility and correlation of an asset is unknowable, we find guidance from historical performance metrics.

In this analysis, we observe how a small allocation to bitcoin has significantly improved the performance of a standard 60% equities and 40% fixed income portfolio.

The typical institutional investor aims to allocate capital on a 3-5 year timeframe on average. For this analysis, we look at two different portfolios:

Over the past three years, the investment portfolio with a 2% allocation to Bitcoin outperformed by 1.7% per annum with 70 bps of additional volatility, leading to a 22.1% improvement in risk-adjusted returns.

Over the past five years, the investment portfolio with a 2% allocation to Bitcoin outperformed by 2.2% per annum with only 50 bps of additional volatility, leading to a 33.2% improvement in risk-adjusted returns. 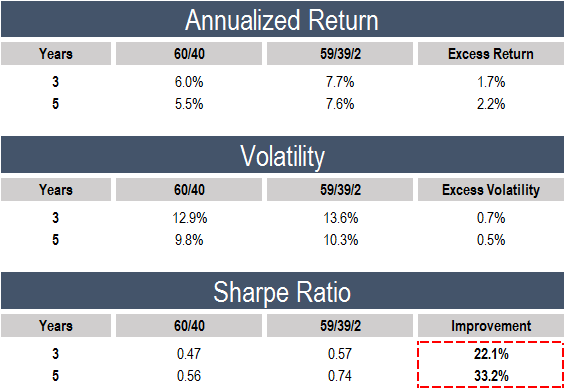 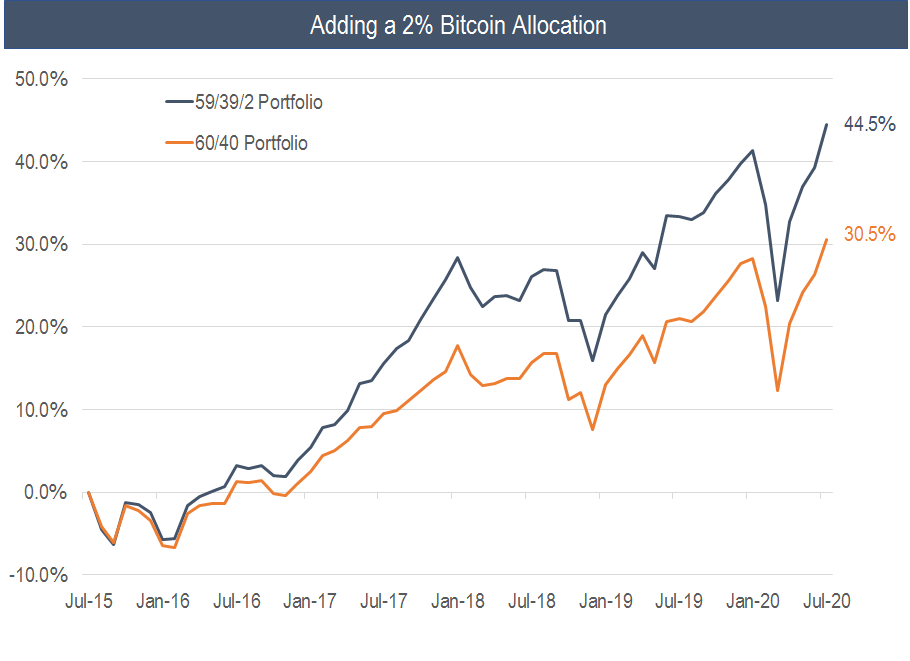 The Acceptance of Bitcoin Within a Diversified Portfolio

Bitcoin has been around for over a decade now, and is accepted as a legitimate asset class by influential investors and economists such as legendary hedge fund investor Paul Tudor Jones and financial historian Niall Ferguson. Each year, the Bitcoin ecosystem grows as more participants join, strengthening its reputation as a “real” asset. With each additional adopter, Bitcoin’s influence within the global monetary system grows and its legitimacy is bolstered. As each year passes, the thesis that Bitcoin is a scam or is going to zero further diminishes. It is one of the few assets whose value grows as its price increases. In the near future, the remaining doubters will either be turned or lose influence as they leave the system, only to be taken place by the next generation of digital-savvy investors who don’t recognize a world without cryptocurrency.

Many institutional asset allocation frameworks include alternative currencies such as precious metals. Given Bitcoin’s tremendous track record of investment performance, high Sharpe ratio and low correlation, it is only a matter of time until Bitcoin is accepted as a desirable asset class in most institutional investment portfolios. We have already seen the first institutional investor take the plunge, trading $250 million in fiat currency for over 21,000 bitcoins, an asset that had no value a dozen years ago.

Every investor has their own opinion on the future of Bitcoin, some positive and some negative. When evaluating the cryptocurrency’s characteristics from a purely quantitative perspective, one can no longer ignore Bitcoin as a potential asset class in investor portfolios.

Bitcoin has a 5-year annualized return of 109% with a Sharpe ratio of 1.27, compared to Sharpe ratios of 0.52 and 0.55 for stocks and bonds, respectively. In addition, Bitcoin has displayed a very low correlation to traditional asset classes. These investment characteristics represent the type of all-star performance that would make the asset a shoo-in for a diversified portfolio.

Disclaimer: This research does not constitute investment, legal or tax advice. Data provided in this research should not be viewed as a recommendation or solicitation of an offer to buy or sell any securities or investment strategies. The information in this research is based on current market conditions and may fluctuate and change in the future. No representation or warranty, expressed or implied, is made on behalf of Accelerate as to the accuracy or completeness of the information contained herein. Accelerate does not accept any liability for any direct, indirect or consequential loss or damage suffered by any person as a result of relying on all or any part of this research and any liability is expressly disclaimed. Past performance is not indicative of future results. Visit www.AccelerateShares.comfor more information.