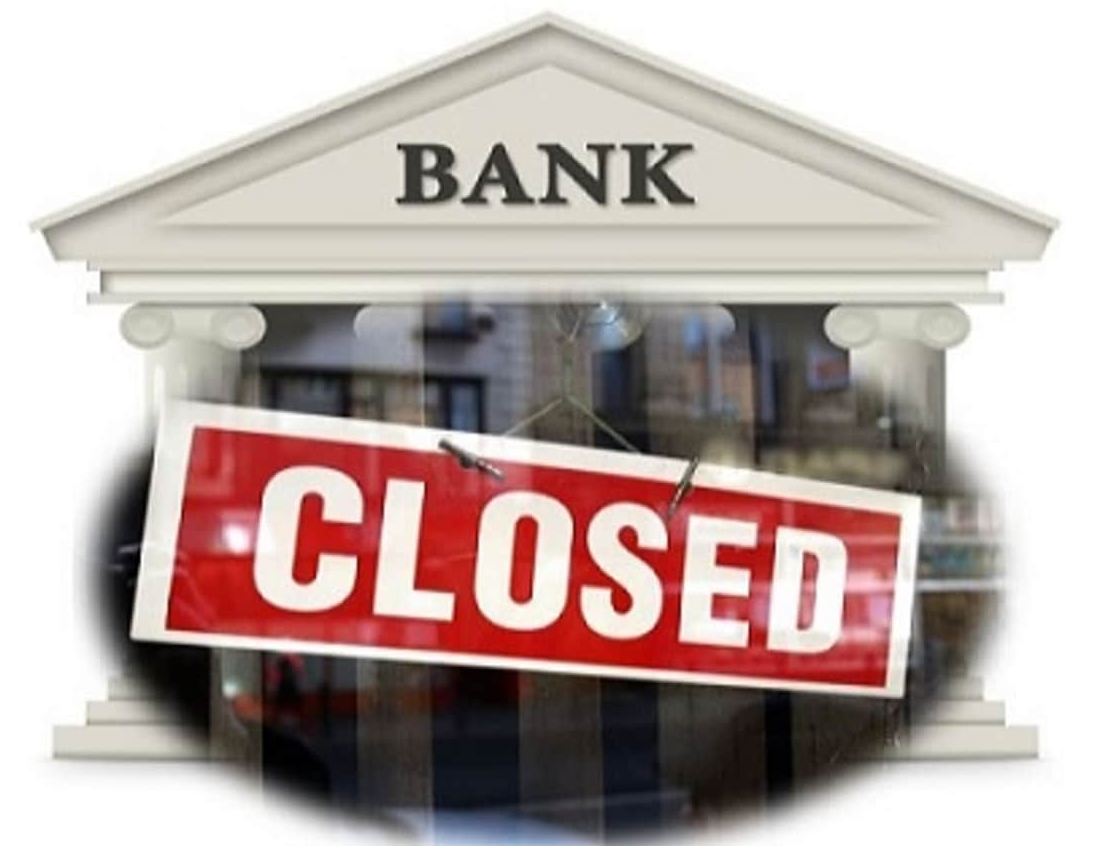 By Damon StreuberOctober 27, 2022No Comments
FacebookTweetLinkedIn

October 27, 2022 – As investors seek more diversification, especially in volatile markets, private equity has garnered a significant portion of the capital that has flowed into alternative assets.

One reason for private equity’s popularity is its lack of mark-to-market, which has the effect of hiding losses from investors when public markets go through bouts of volatility.

Harvard’s $50.9 billion endowment indicated that it lost just -1.8% in its fiscal year ending June 30, attributing the relative outperformance to its private asset portfolio.

“The more private assets an investor had in its portfolio in FY22, the stronger their performance,” Narv Narvekar, CEO of Harvard Management Company, wrote in Harvard’s annual report. “This is somewhat counterintuitive and may indicate that private managers have not yet marked their portfolios to reflect general market conditions.”

While investors can be oblivious to losses for limited time periods through mark-to-model accounting, reality can be ignored for only so long. At the end of the day, private equity is most correlated with leveraged small-cap value stocks. Ironically, it was Harvard’s own research that proved this thesis.

Therefore, it is logical that significant investor capital has flowed into private assets over the past several years. 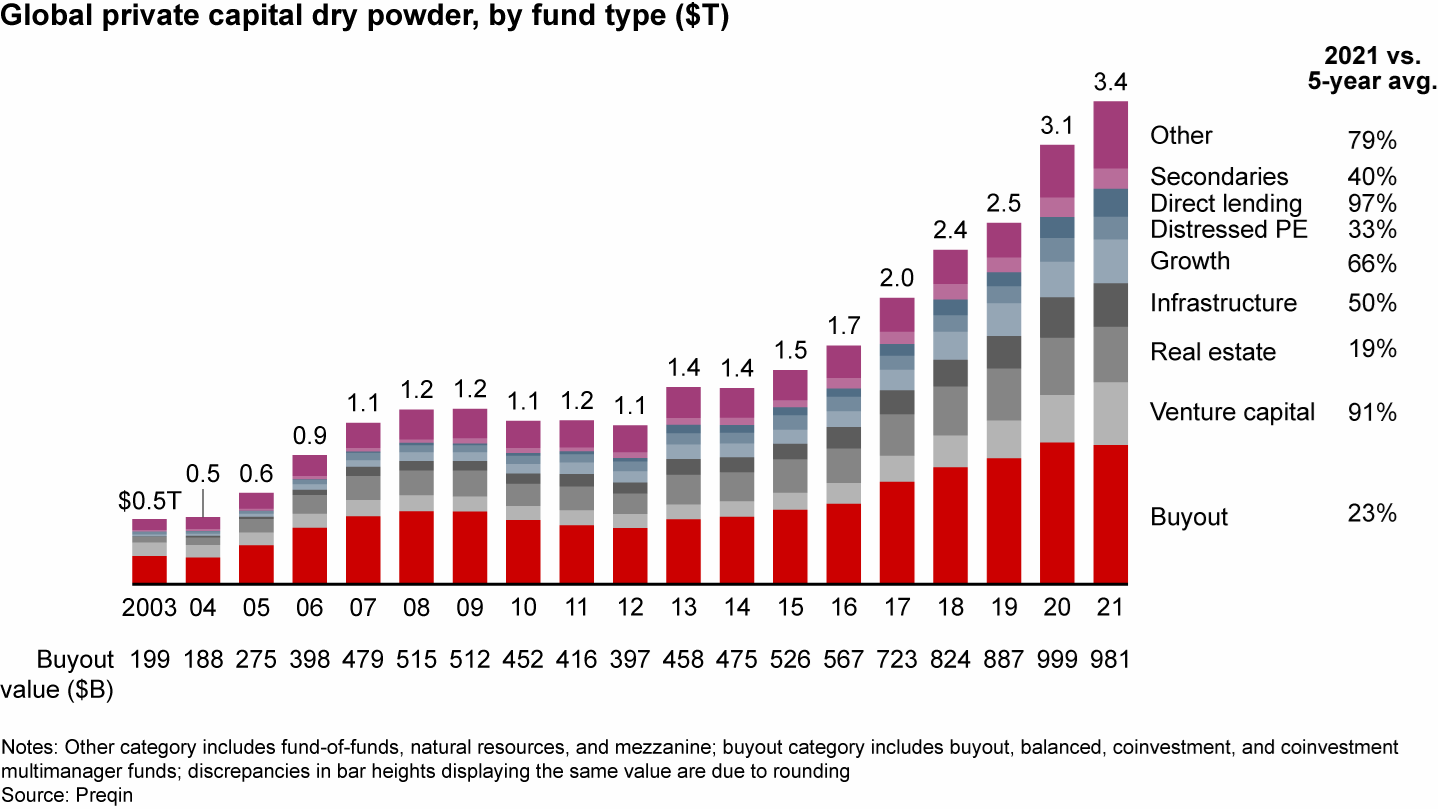 At the start of the year, there was $3.4 trillion of “dry powder” in private asset funds, with private equity (leveraged buyouts, or LBOs) having approximately $1 trillion of unspent capital.

In order for PE sponsors to earn their lucrative fees, this capital needs to be put to work.

Historically, the main driver of private equity returns has been leverage (this is the “L” in LBO).

While the typically S&P 500 company has a debt-to-EBITDA level of less than 2x, the average private equity buyout utilized more than three-fold the amount of debt (6x EBITDA). 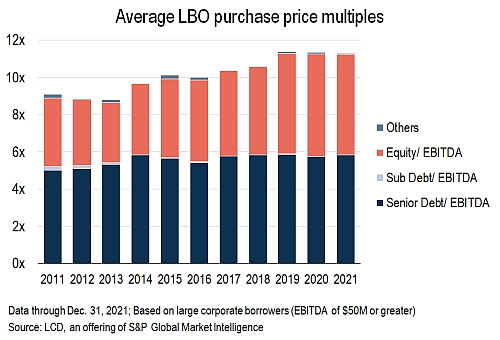 An asset with 3x the leverage should be three-fold more volatile in the public markets. What is 3x the Russell 2000 return year-to-date? No wonder these businesses stay private and out of the purview of the discerning public markets.

In any event, debt has always been a trademark of the private equity industry. Banks have been the primary source of the debt funding these buyouts.

Unfortunately, with rising interest rates and widening credit spreads, high-yield bond and leveraged loan prices have suffered. Banks that committed to funding private equity deals in loftier times (i.e. earlier this year) are now sitting on debt that is worth far less than face value. 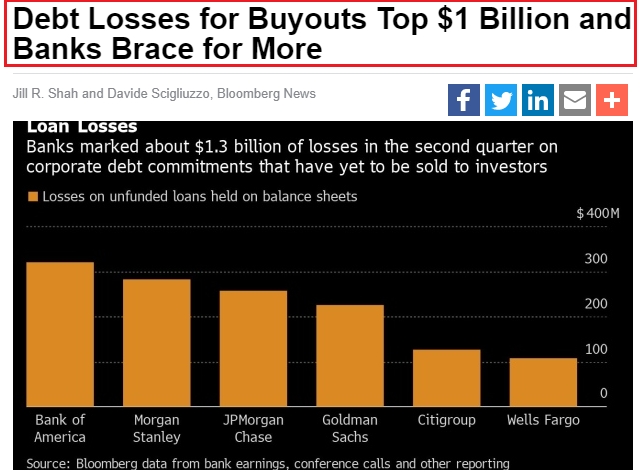 With banks facing more than $1 billion of losses from the debt they committed to funding for private equity deals struck earlier in the year, it makes sense that banks would pull back on lending. Given this dynamic, I expected a significant slowdown, or outright halt, of private equity deals. “It is probable that private equity deals have taken a pause for the next several months,” I wrote in last month’s Merger Monitor.

While I was correct that banks would stop funding buyouts, I was wrong about private equity deals stopping.

Thoma Bravo is one of the largest and most active private equity sponsors. The software-focused private equity firm has already closed four buyouts this year worth an aggregate of $23 billion.

This month, Thoma Bravo announced the $2.3 billion buyout of identity and access management software company ForgeRock. The deal in and of itself was not surprising. In fact, it was right up the PE firm’s alley in terms of sector, size and structure. However, there was one significant change.

The ForgeRock buyout by Thoma Bravo was to be funded with 100% equity.

That’s right – the ForgeRock go-private deal is an LBO without the L. We will call it the unleveraged buyout.

The deal is one of the first of its kind, in which a private equity firm takes a company private using no debt, and only their own equity.

Given that banks are closed for business and private equity firms have capital to put to work, I suppose this was a natural result.

In October there were two more private equity deals announced.

After ForgeRock came KnowBe4, an IT security company that struck a $4.6 buyout with private equity firm Vista Equity Partners.

Vista has also been busy this year, already closing two buyouts worth a total of nearly $25 billion.

The KnowBe4 buyout was not an unleveraged buyout per se, but a twist on the classic LBO. One unique, and unsurprising, feature of the KnowBe4 go-private was the lack of bank financing. While the $4.6 deal carried an uncharacteristically low $1 billion of debt, the interesting characteristic is that it was funded by only non-bank lenders – namely private credit funds. These private credit funds are largely owned by leveraged buyout firms themselves including Blackstone, Fortress and Carlyle.

The other buyout in October was the management buyout of oil producer Continental Resources. This deal was unique in that the founder, Harold Hamm, already owned 83% of the company’s stock. He funded the buyout of the minority shareholders using the corporation’s own cash and credit facility. No external financing was needed.

What does this all mean for M&A?

While private equity dealmaking has slowed, it has not stopped. 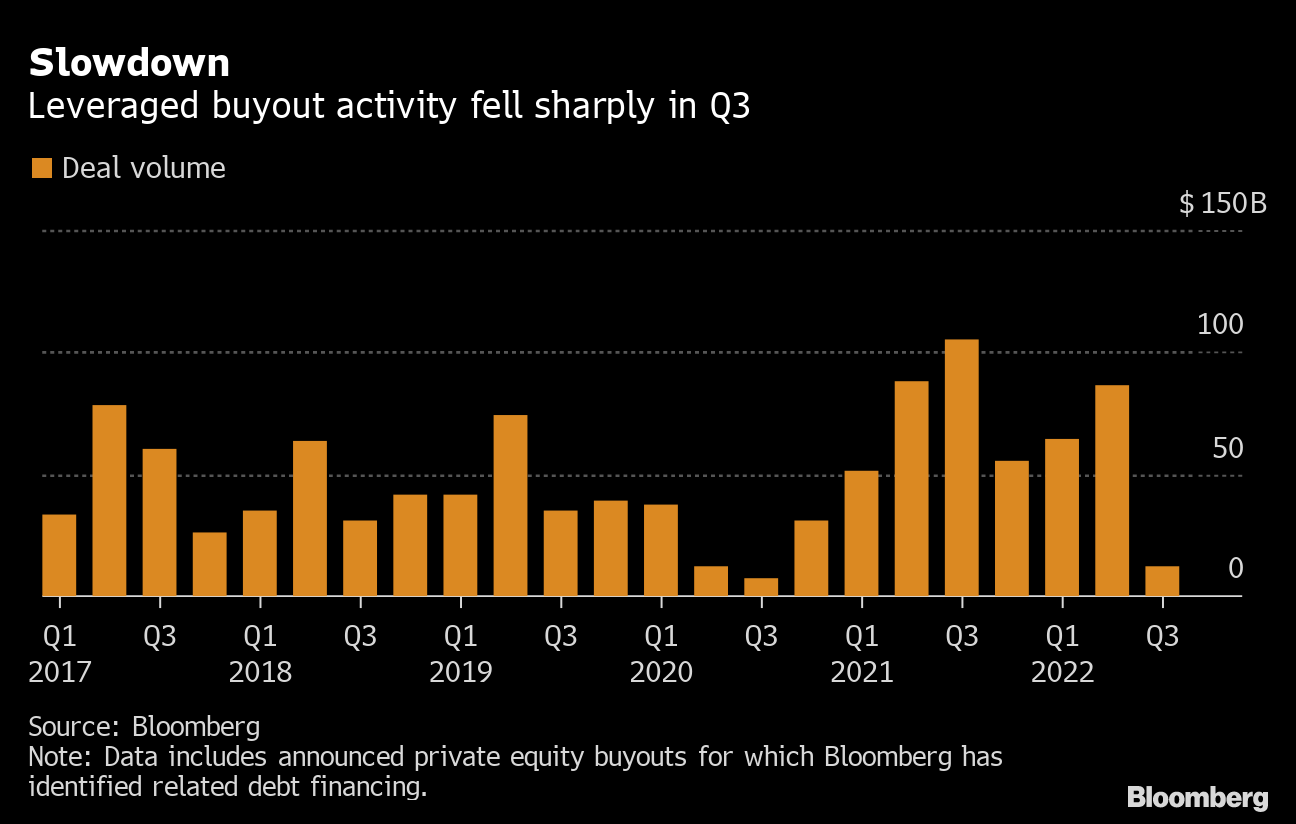 Buyout firms have $1 trillion to spend. Banks are not financing these deals, however, someone else is.

As merger arbitrageurs, we look forward to the investment opportunities that these new unleveraged buyouts create. 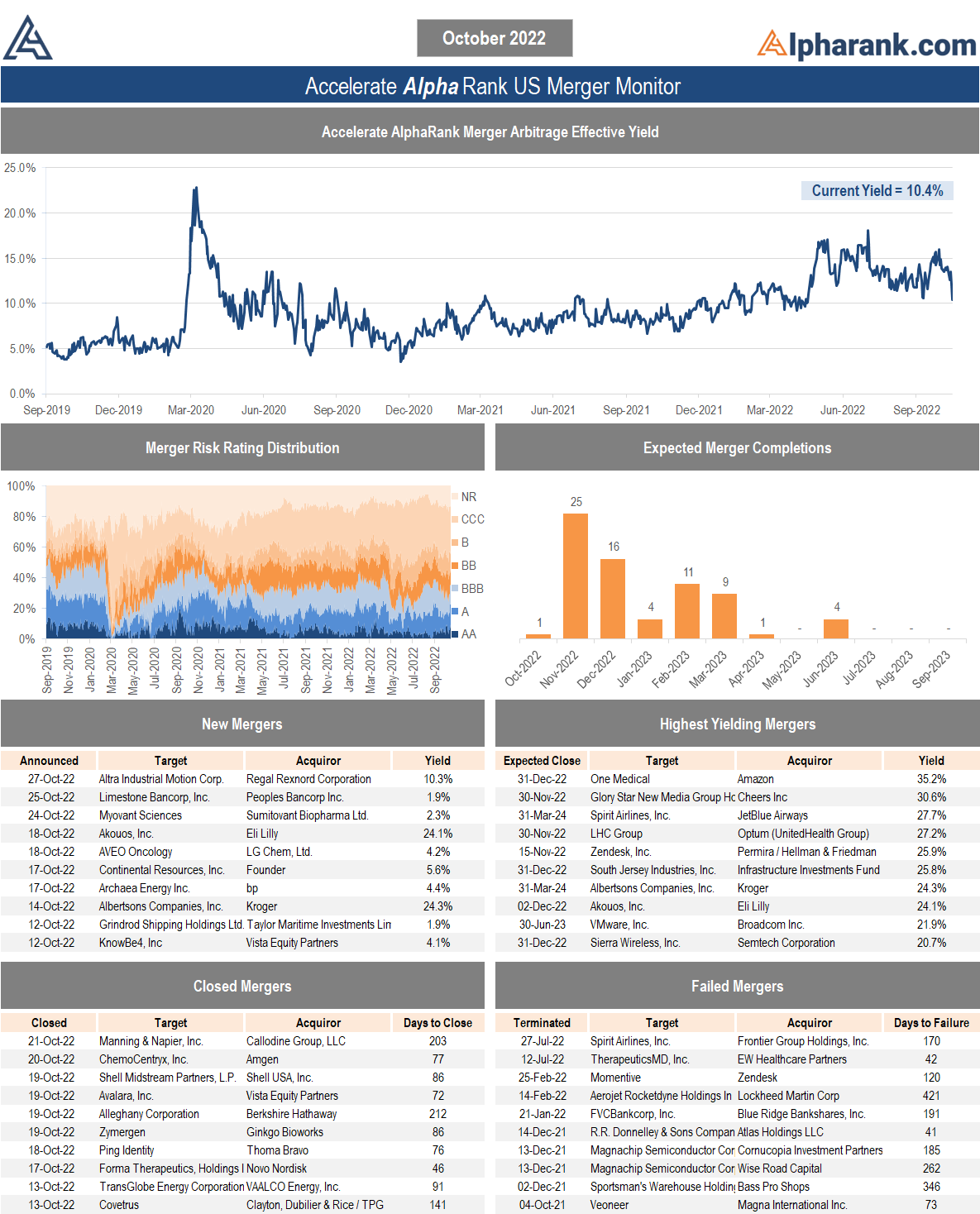 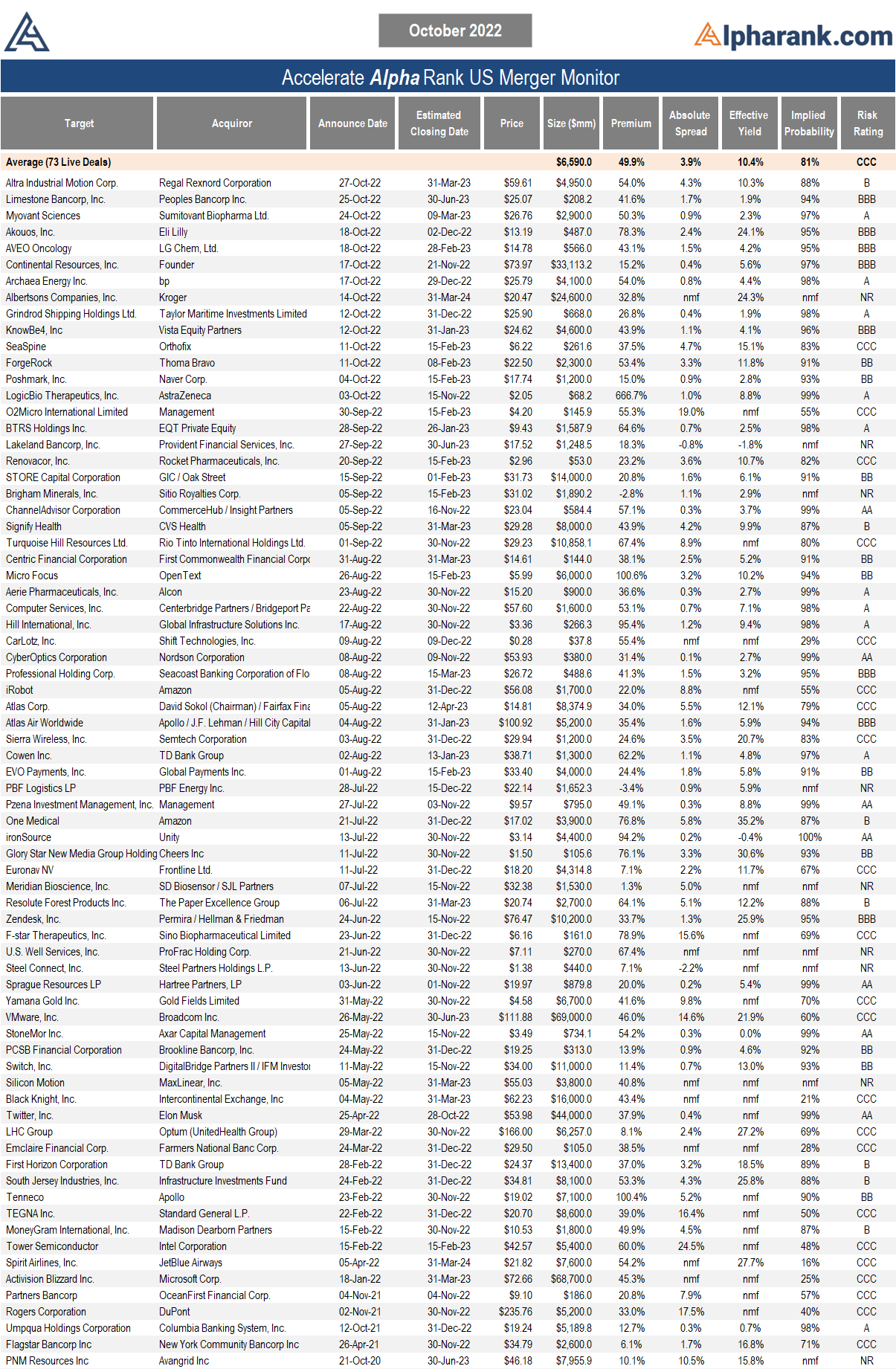