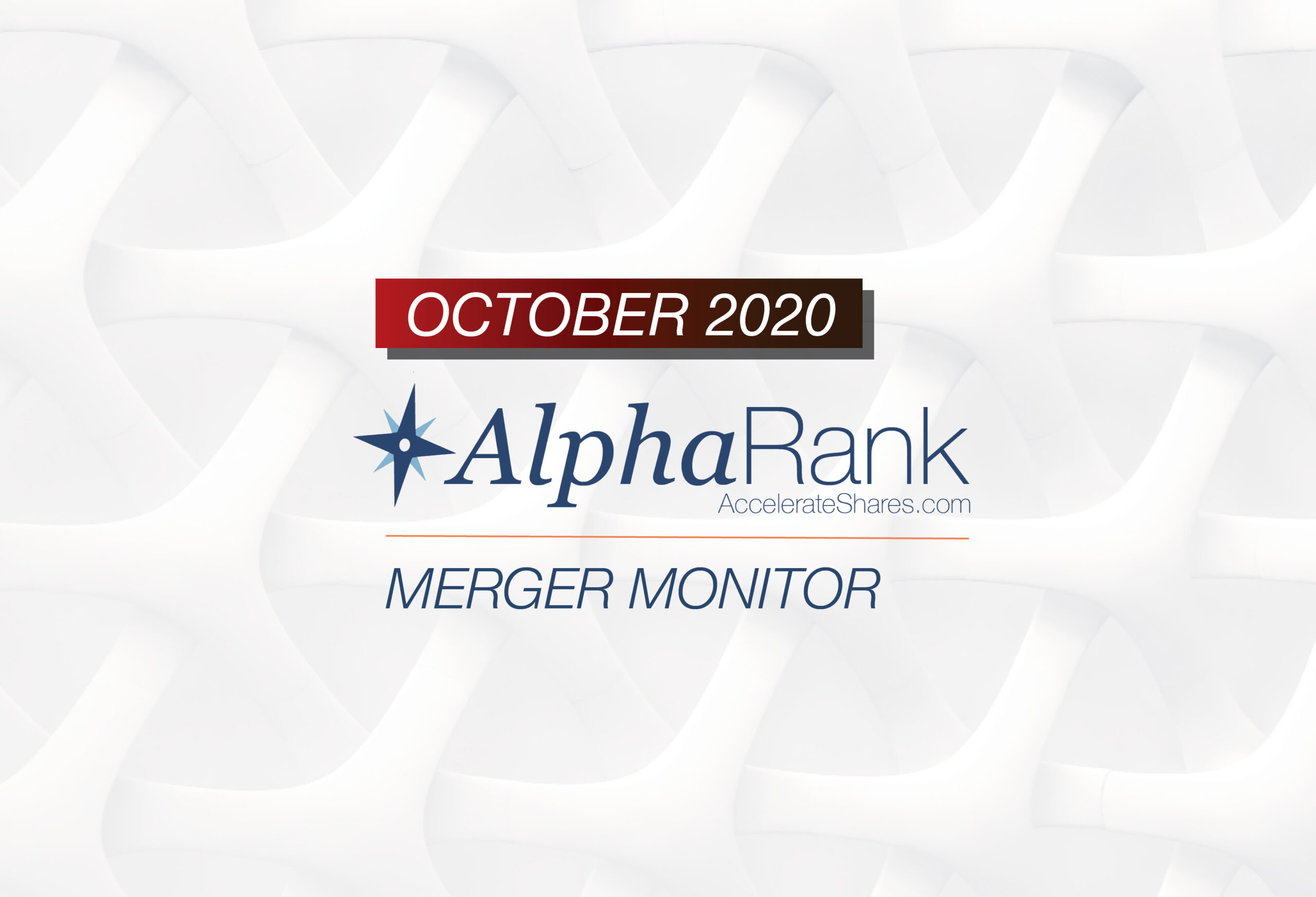 By Mike KessleringOctober 27, 2020No Comments
Facebook0Tweet0LinkedIn0

October 27, 2020 – The biotech and technology sectors have dominated M&A coming out of the pandemic-led bear market as companies seek growth in a recessionary environment.

This dynamic has changed over the past month as we saw the beginning of a new trend in mergers and acquisitions, which is consolidation in the oil patch.

Since last month’s Merger Monitor, seventeen U.S. mergers have been announced, representing an aggregate value of $73.8 billion. Of these transactions, only three were in the oil and gas sector, however, these energy deals represented over $26 billion of value. Last month, in contrast, there were only ten M&A transactions, representing an aggregate value of $38.5 billion, with zero energy deals.

Notable oil and gas M&A over the past month include:

In addition, despite an almost dry market for M&A in Canada over the past month, two deals were announced this week, including Cenovus Energy’s acquisition of Husky Energy for $10.2 billion. In the deal press release, Cenovus noted that the intent was a nil-premium merger, but Husky’s stock fell so much that the deal ended up being announced at a 23.9% premium.

Nonetheless, these energy deals represent consolidation for survival, not growth, and therefore targets are not getting rewarded with sizable control premiums. All of the oil and gas mergers were announced at premiums substantially lower than the present average 34.2% deal premium. This stands in stark contrast to the large number of biotech deals we have seen lately, some of which have been executed at premiums exceeding 100%. The steep dichotomy in sentiment between biotech and energy is noteworthy.

One notable deal that closed on its terms was PPF Groups’ $2.1 billion acquisition of Central European Media (CETV). The CETV deal was announced pre-COVID, and therefore the deal spread went through severe turbulence in the first quarter’s bear market. I noted that the CETV deal spread was the most insane merger arbitrage I have ever seen in my 13+ years in M&A. On March 16, the spread blew out and stock dropped -55% on no news. The deal was completed on the terms, with no issues and no repricing. This favourable result serves as your periodic reminder that significant inefficiencies still exist in the merger arbitrage space, and enterprising investors can capitalize on these opportunities.

One pre-COVID deal fell apart during the month, which the market expected given the existing litigation between the parties for a deal gone bad. Instead of going through a drawn-out court case (and setting the first MAE precedent in the coronavirus era), Comtech Telecommunications and spurned target, Gilat Satellite settled with Comtech paying Gilat $70 million, or 13.1% of the deal’s value, to agree to call off the deal.

Merger spreads have continued to tighten, and have now returned to pre-COVID levels of around 6%. Given merger arbitrage’s relatively slim potential returns with real downside risk, which are currently less attractive than low-risk SPAC arbitrage yields, the Accelerate Arbitrage Fund (TSX: ARB) currently has only about 30% of its portfolio dedicated to merger arbitrage, with 70% allocated to SPAC arbitrage. 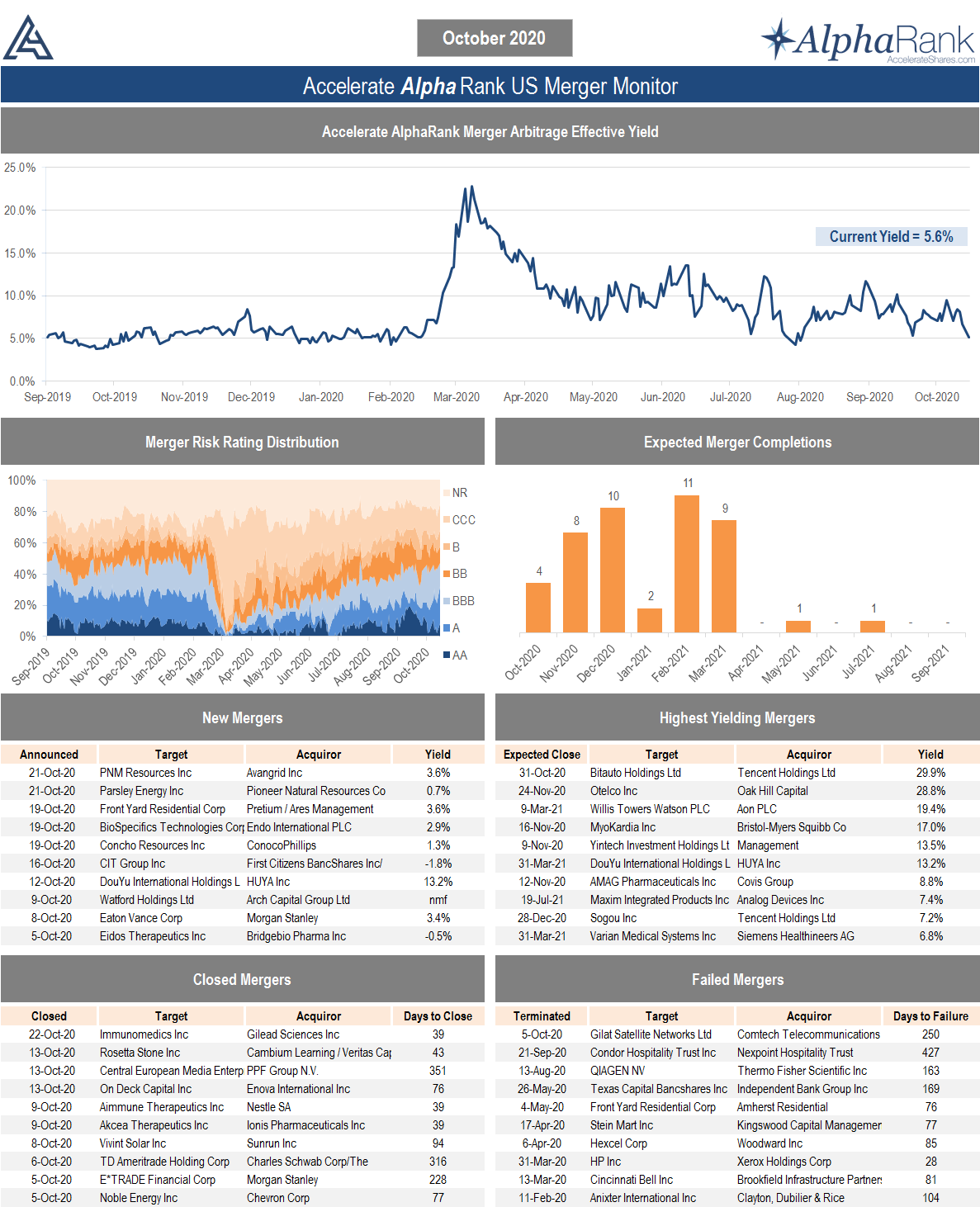 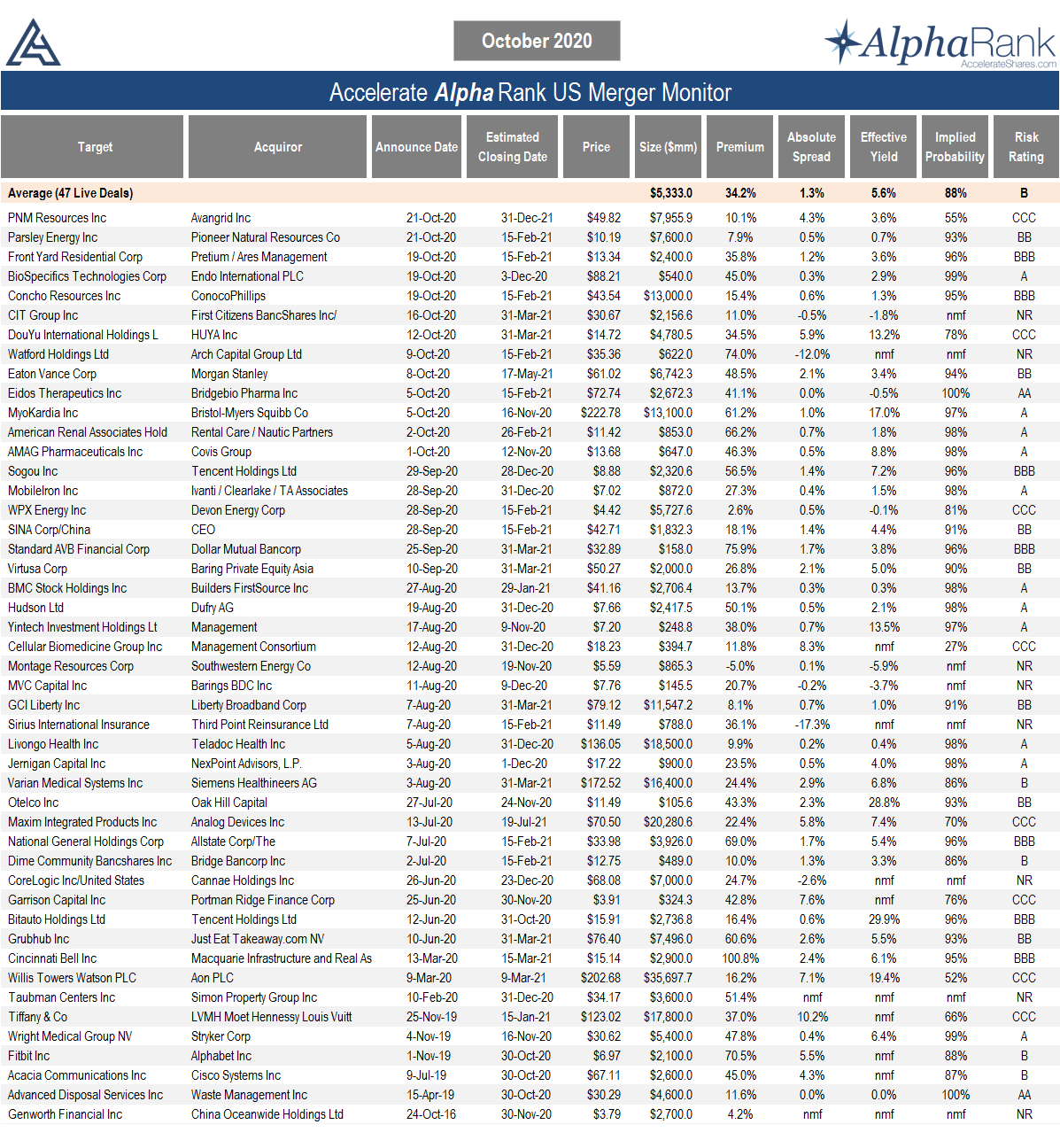