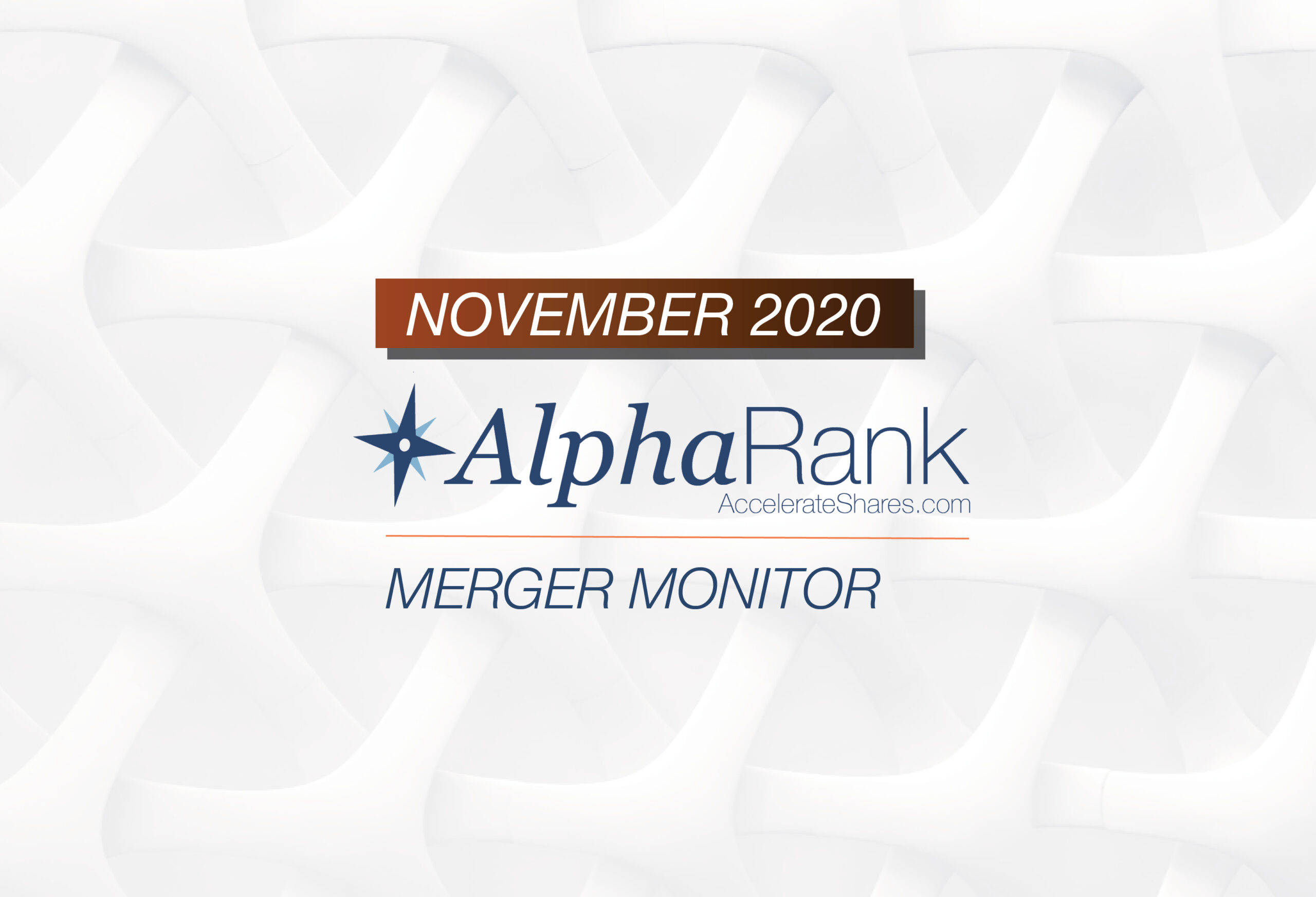 By Mike KessleringNovember 30, 2020No Comments
Facebook0Tweet0LinkedIn0

November 30, 2020– Two significant trends in M&A have emerged over the past month that indicate perhaps the start of a new cycle in two sectors.
The first trend that has emerged is semiconductor consolidation. We previously highlighted specific sectors active in mergers and acquisitions, including biotech in the spring, gold this summer and energy last month. Recently, two large semiconductor transactions were announced:

These highly strategic consolidation transactions differ from the recent trend in energy M&A in that they were struck at control premiums above the current average of 35.8%, while energy deals represented low premium deals. This dynamic is caused by investor sentiment, as semiconductors are in a bull market while energy is in a long-term bear market.

The second trend that has grown into a consistent theme is the re-emergence of the leveraged buyout. We previously noted private equity’s absence throughout the pandemic-led bear market, when takeover candidates were at their cheapest. Now that equity markets are back to all-time highs and credit is readily available, private equity firms are announcing LBOs left and right. Recent buyouts include:

We have seen a similar dynamic play out in Canada, as US-based private equity firms have struck deals for two Canadian buyouts:
Private equity firms are indicating that it is “all clear” on the economic front, as a dearth in LBOs seven months ago has turned into a flurry.

Since last month’s Merger Monitor, fourteen U.S. mergers have been announced, representing an aggregate value of $80.9 billion, up from last month’s $73.8 billion.

The last ten announced merger deals offer an average merger yield of just 2%. On a relative basis, it is hard to allocate capital to these merger opportunities, which come with real and material downside risk, when we are forecasting returns as high as 10% for low-risk SPAC arbitrage. It is rational that, given this fact, the Accelerate Arbitrage Fund (TSX: ARB) now has 80% of its portfolio dedicated to SPAC arbitrage (up from 70% last month) and only 20% in merger arbitrage. Arbitrageurs who haven’t adapted and devoted their portfolios to SPACs have underperformed markedly in 2020, while SPAC arbitrageurs enjoy low-risk and consistent double-digit returns this year.

All is not uninteresting in merger arbitrage. Cardinal Resources, one of the top merger positions held in ARB, remains subject to a frenzied bidding war featuring three competing buyers that have lifted shares a stunning 425%. This bidding war continues and is one to watch, pleasing shareholders in the process. 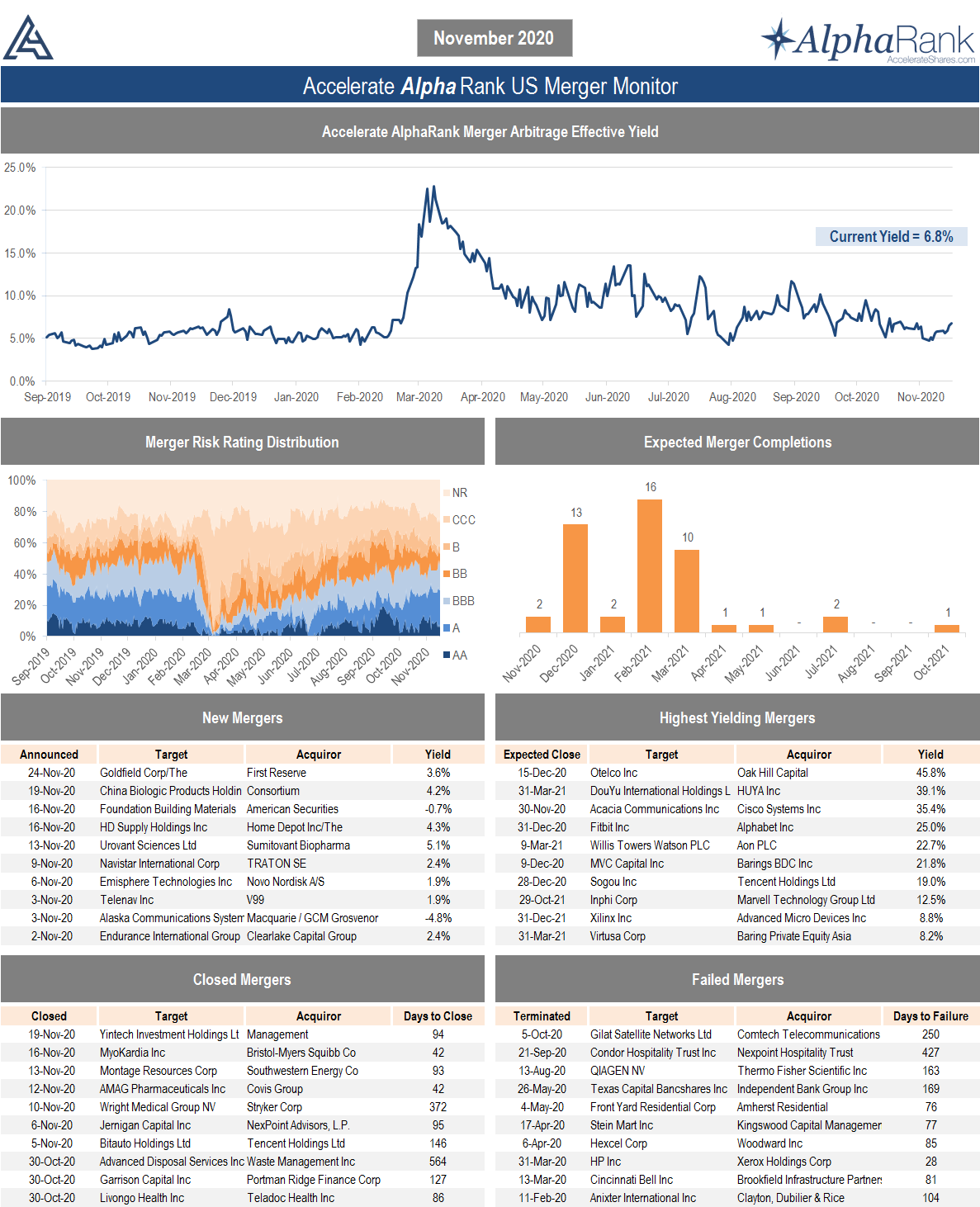 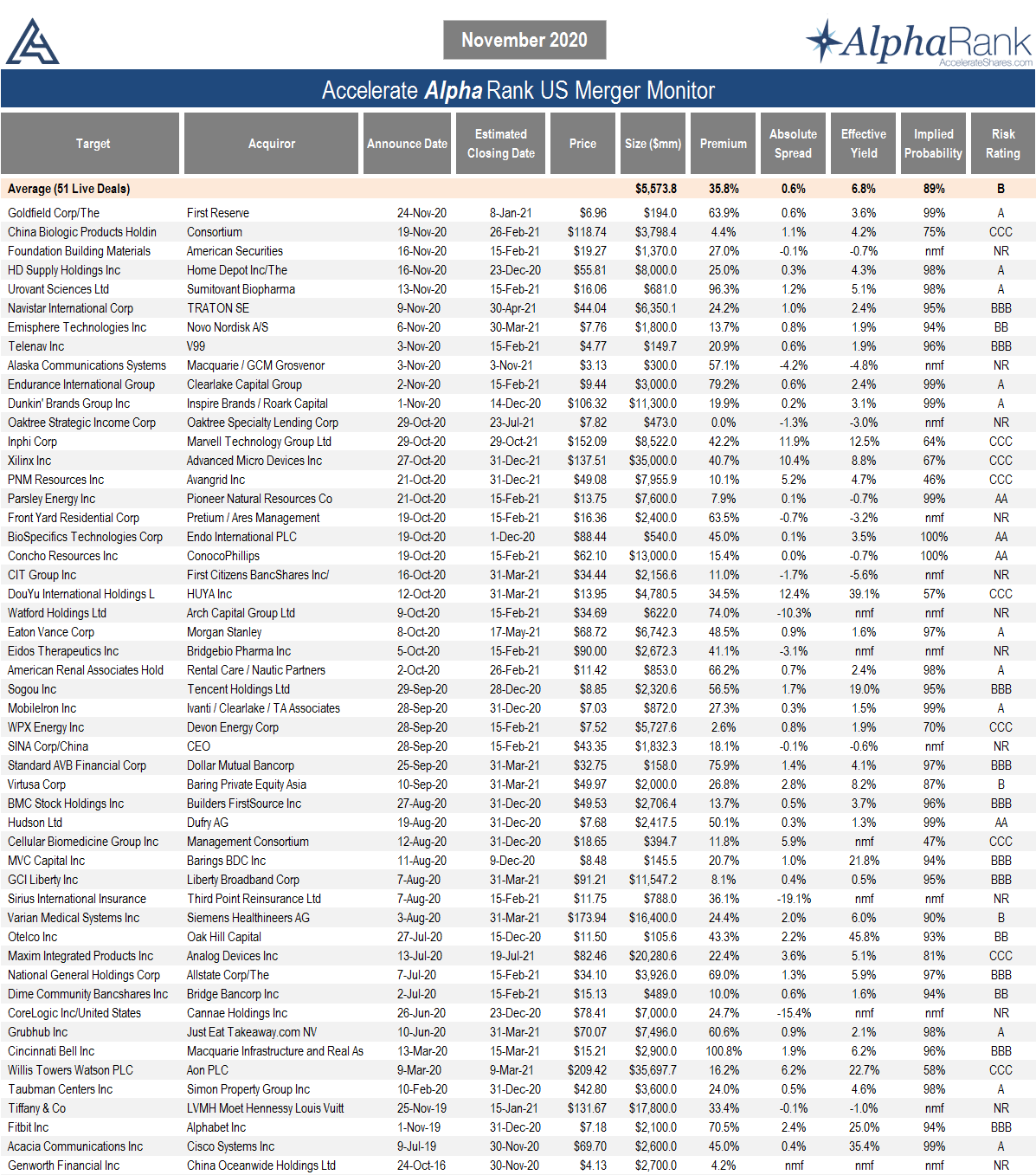