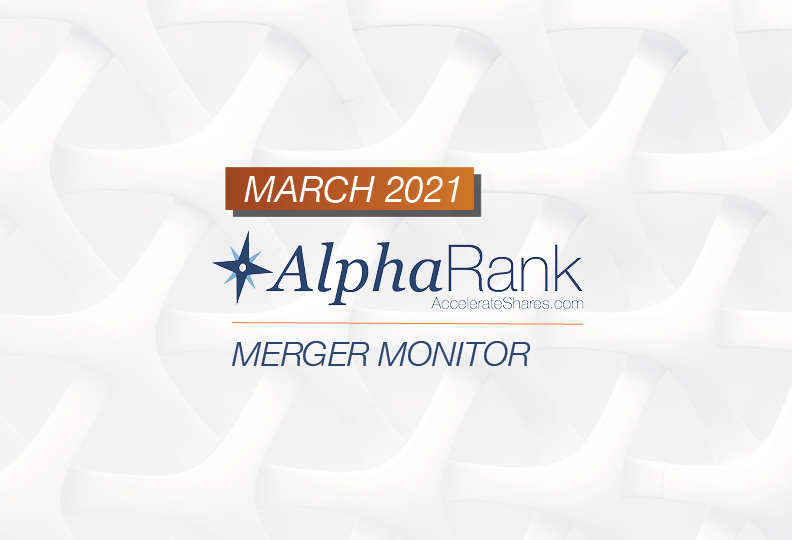 By Mike KessleringMarch 31, 2021No Comments
Facebook0Tweet0LinkedIn0

March 31, 2021 – There is seemingly always some drama in hedge fund land.
In January, it was the short squeeze caused by the Wallstreetbets meme stock surge.

This month it was the reverse, in which Archegos Capital not only blew itself up but caused billions of dollars in losses for prime brokers Nomura and Credit Suisse, by using extreme amounts of leverage trying to manufacture short squeezes. Utilizing leverage, rumoured to be greater than 10:1 on stock bets, Archegos Capital attempted to push up heavily shorted stocks such as ViacomCBS via swap contracts. The scheme came to a swift end when the squeeze reversed, dealing devastating losses to Archegos and its service providers. Nonetheless, this was a relatively isolated event with minimal discernable knock-on effects.

Whether it was due to volatility related to the Archegos blow-up, or due to rising interest rates, the Accelerate AlphaRank Merger Arbitrage Effective Yield reached 10% this month, prior to declining to 8% at month’s end. The current 8% merger yield level is not abnormal in the context of a well-functioning market.

There were $63.9 billion of deals spread out across thirteen public U.S. mergers and acquisitions during the month. The U.S. deal universe stayed at 69 mergers outstanding, as new transactions matched those that closed.

Both of these M&A deals offer considerable merger yields of 8.8% and 18.1%, respectively, due to regulatory concerns given their size.

Aside from those that terminated in the above competitive auction processes, there were no failed M&A deals in March.

We continue to believe that we are in an environment conducive to increased M&A – well performing equity markets, low interest rates and manageable volatility. The Accelerate Arbitrage Fund (TSX: ARB) has been selectively adding to its merger arbitrage portfolio. 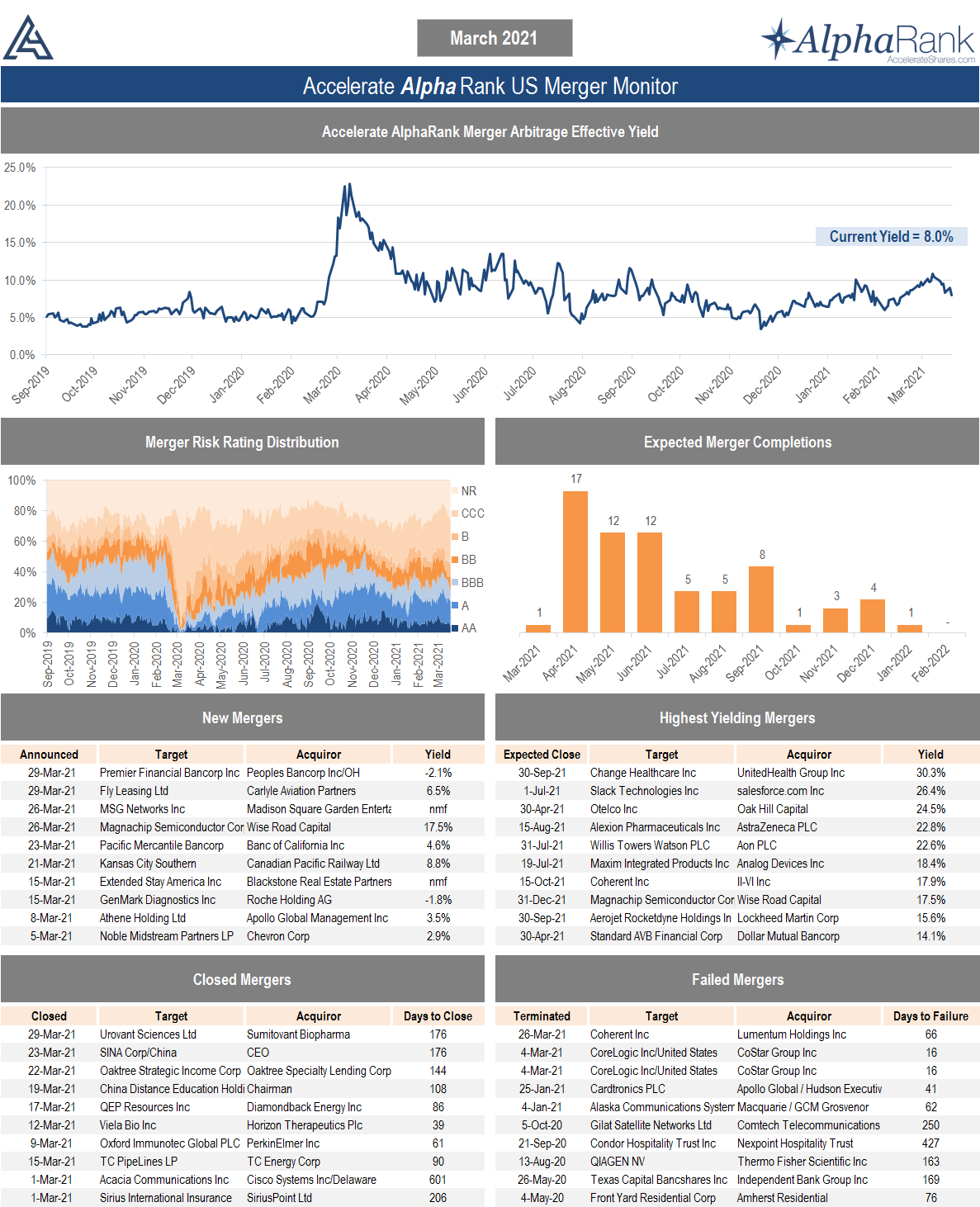 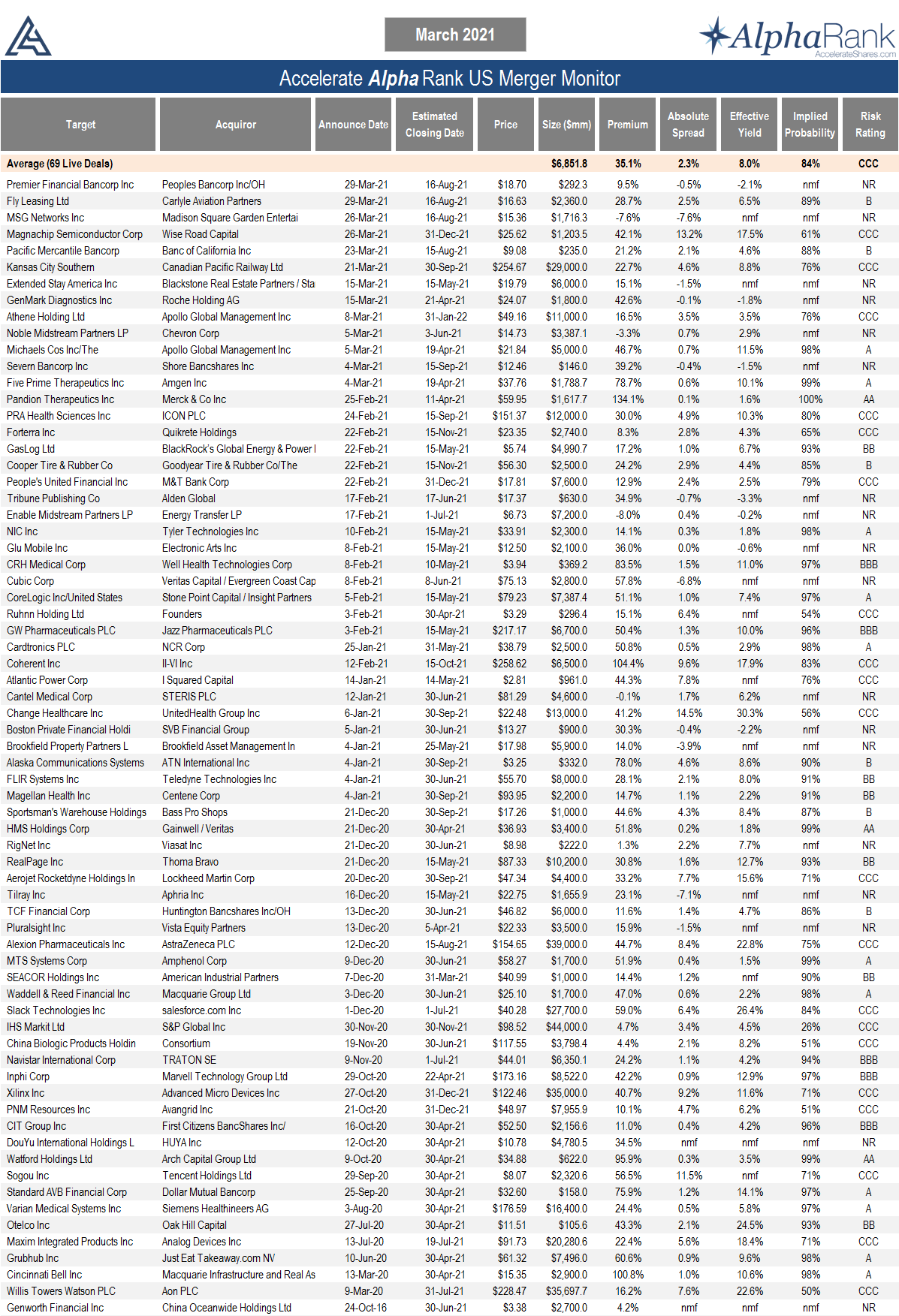