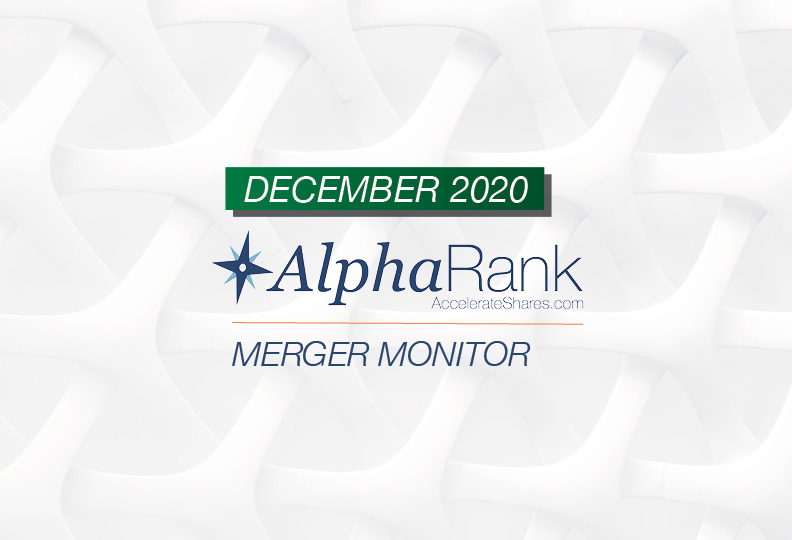 By Mike KessleringDecember 30, 2020No Comments
Facebook0Tweet0LinkedIn0

December 30, 2020 – The desirable merger arbitrage yields offered during the pandemic bear market are now a thing of the past.

Since the spring, merger arbitrage spreads have largely normalized. The past ten announced mergers offer an average yield of just 2.2%, a small cry from the double-digit yields available nine months ago. Of the past ten deals announced, two are trading through the consideration, with arbitrageurs accepting negative returns for the chance of a higher bid.

Over the past month, 21 M&A transactions were announced for an aggregate value of $158.4 billion, nearly doubling last month’s $80.9 billion tally.

The large aggregate size of total deals over the past month was buoyed by four transactions above the $10 billion mark:

Nonetheless, the merger arbitrage risk premium has declined markedly since the spring. Back in the depths of the pandemic-led bear market, there was a point in time in which the market was pricing in that half of all outstanding mergers would break and the average yield reached nearly 25%. Since markets began to crater in early March, just 7 U.S. mergers were terminated due to the bear market, while 96 deals were completed successfully, representing a deal-break rate of approximately 7%. The 10-year average deal-break rate is 7%, and therefore we did not see an elevated number of legitimate transactions terminated as a result of the bear market. This statistic showcases the strength of definitive merger agreements, proving that it is nearly impossible for a buyer to wriggle out of a deal due to a market decline.

With two of the most high profile merger dramas coming to a close, including Simon’s acquisition of Taubman and LVMH’s takeover of Tiffany, much of the stress and volatility has left the merger market. Both Taubman and Simon settled with their suitors at lower prices prior to heading to deal litigation.

As for allocating to arbitrage opportunities in the current market environment, our comment from last month’s merger monitor highlights our unchanged view:

“The last ten announced merger deals offer an average merger yield of just 2%. On a relative basis, it is hard to allocate capital to these merger opportunities, which come with real and material downside risk, when we are forecasting returns as high as 10% for low-risk SPAC arbitrage. It is rational that, given this fact, the Accelerate Arbitrage Fund (TSX: ARB) now has 80% of its portfolio dedicated to SPAC arbitrage and only 20% in merger arbitrage. Arbitrageurs who haven’t adapted and devoted their portfolios to SPACs have underperformed markedly in 2020, while SPAC arbitrageurs enjoy low-risk and consistent double-digit returns this year.” 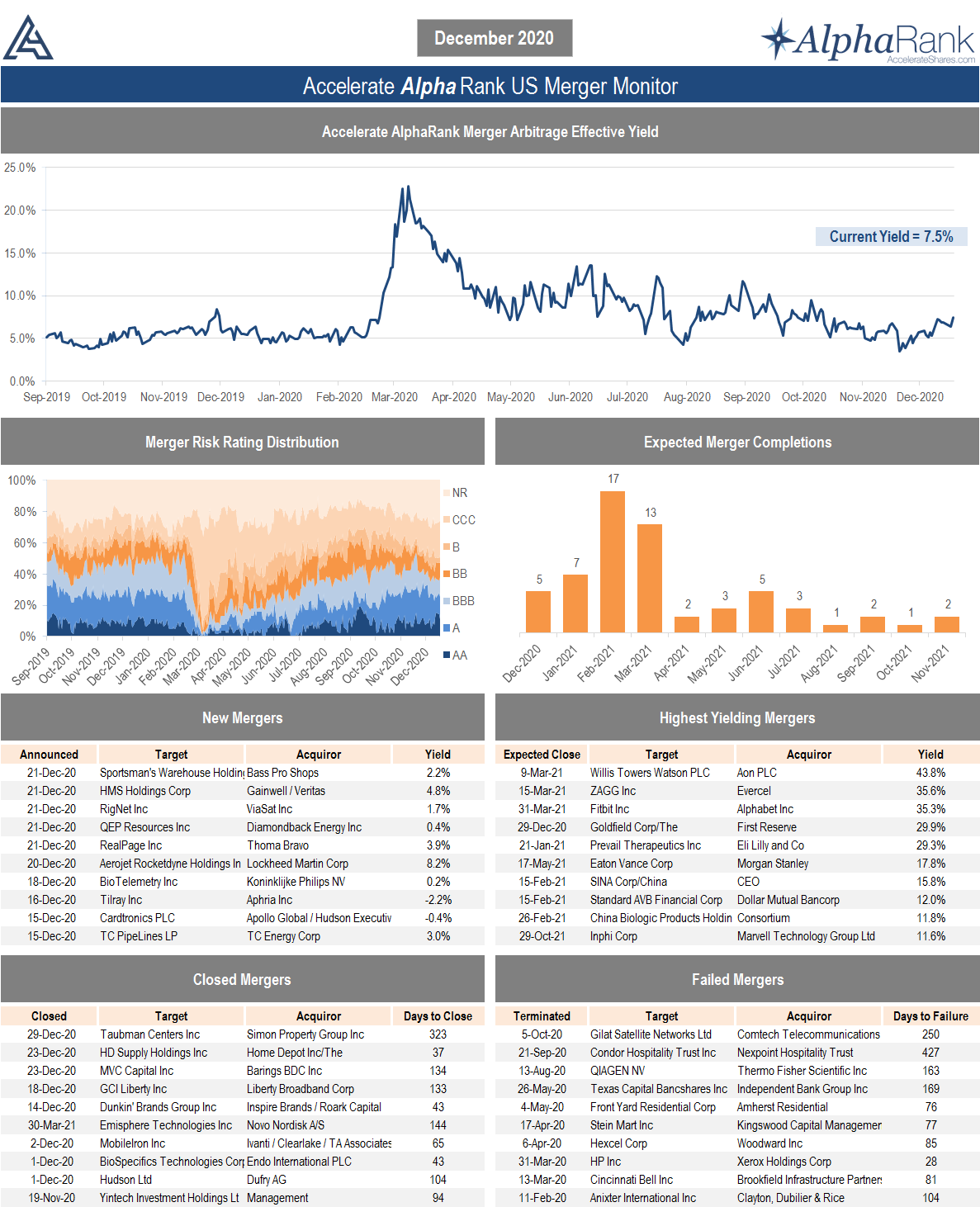 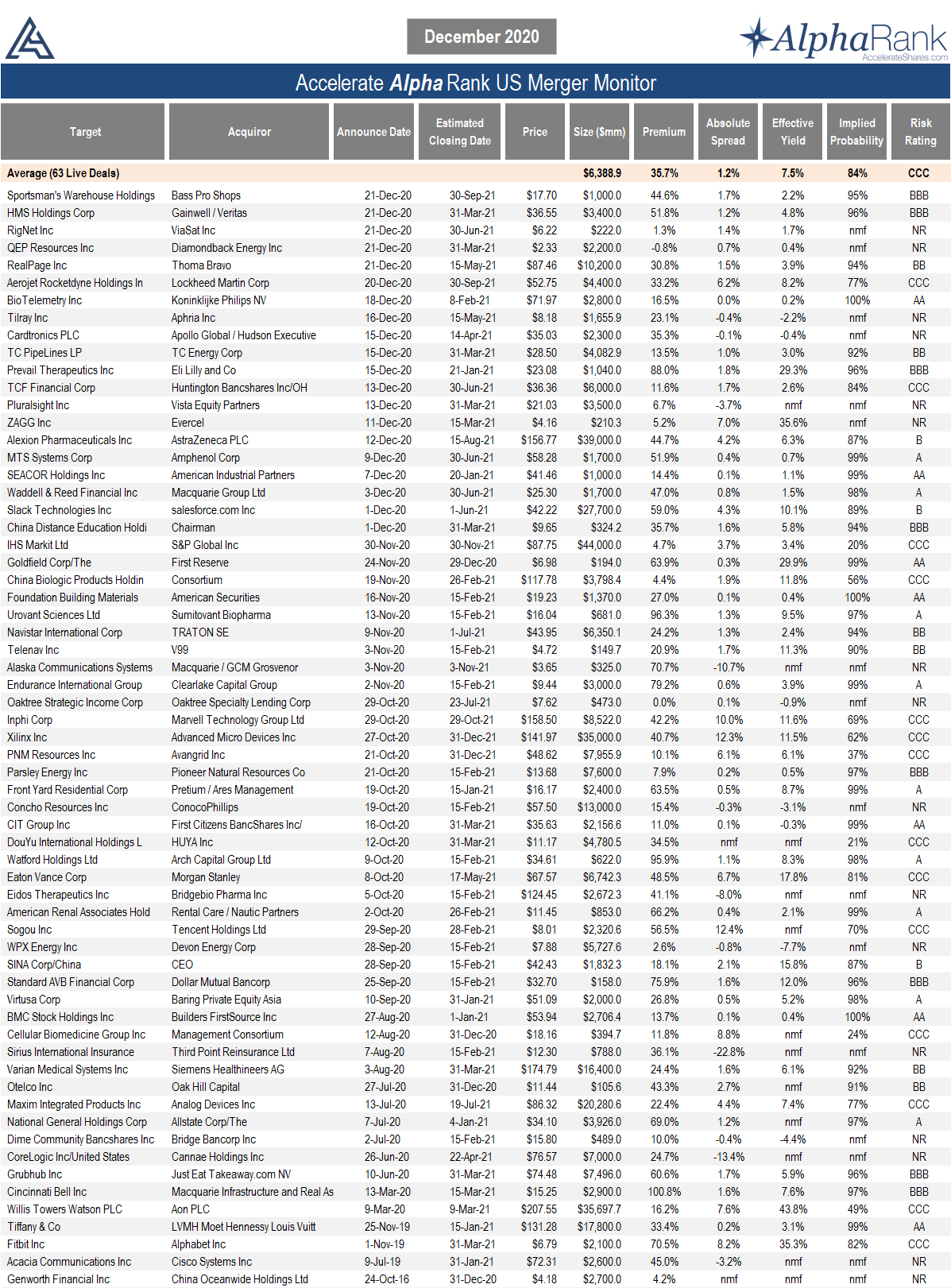