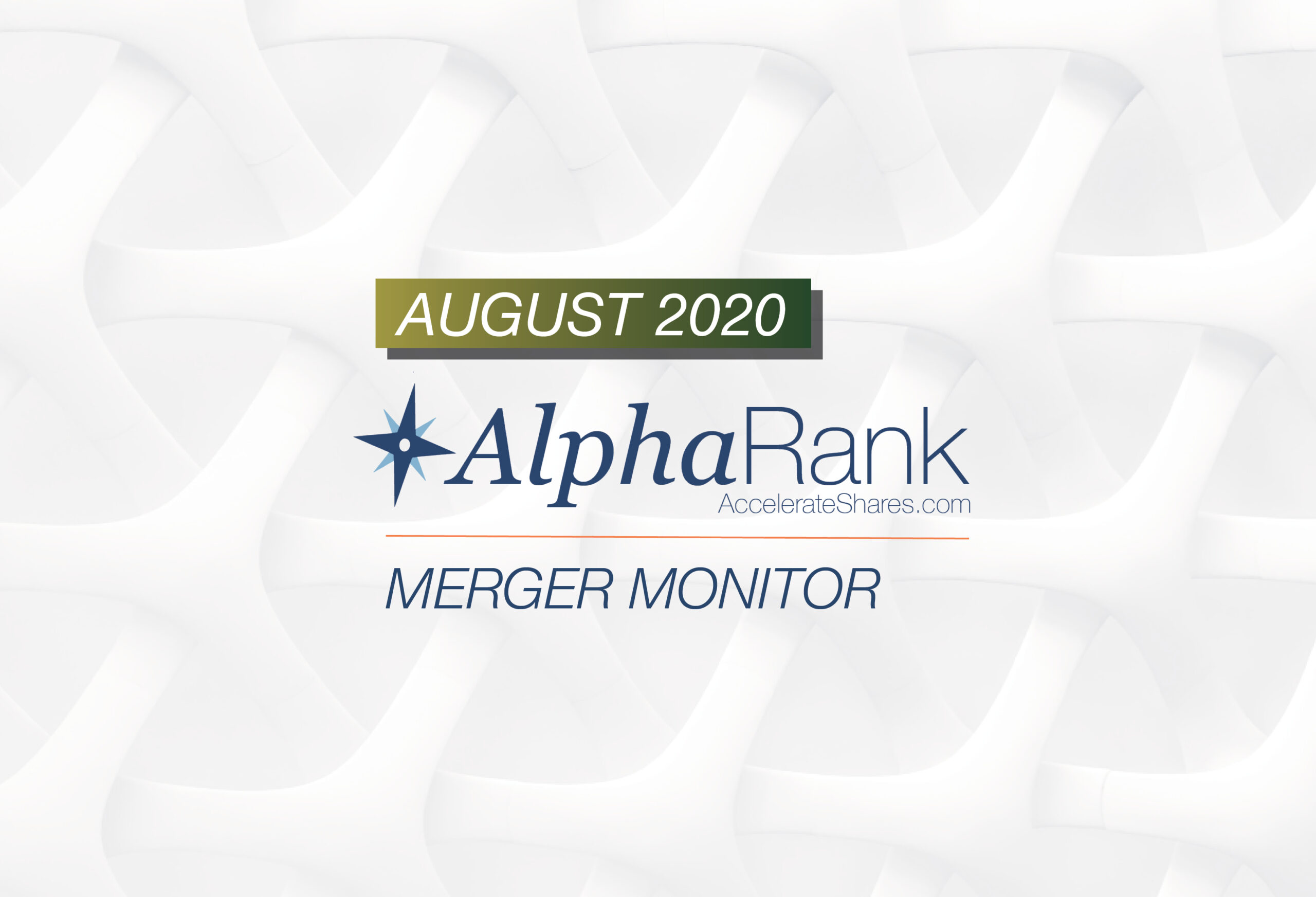 August 28, 2020 – We had seen early signs of a mergers and acquisitions renaissance earlier this summer, with a trickle of deals announced after a pronounced deal drought from March through May due to the pandemic.

Corporate confidence has returned to board rooms, making companies more comfortable pulling the trigger on deals. Since last month, the U.S. deal universe has expanded from 43 to 49. Investors’ nerves have been cooled as well, as the Accelerate AlphaRank Merger Arbitrage Effective Yield has declined from 12.2% to 8.1% since July, reflecting a lower risk premium. As things normalize, the average merger yield is trending down towards its pre-pandemic average yield of 4% to 6%. In addition, many of the deals announced after March’s market decline have been seemingly vaccinated, as any COVID-19 risks were taken into account in the drafting of merger agreements and therefore are not affected by adverse developments due to the coronavirus. Also, many pre-pandemic deals have closed, eliminating their previously high merger yields from the market.

Canadian M&A tends to be ignored by large arbitrage firms. This oversight is a mistake, given this can be one of the most lucrative areas of the market. For example, in August, three M&A deals closed in Canada and all three of these deals were beneficiaries of bidding wars which represented massive wins for arbitrageurs who participated:

Since following the Canadian M&A space closely since 2007, I have not seen a month as rewarding as August was for arbitrageurs willing to invest in Canada. Given our stance on the matter, it shouldn’t come as a surprise that the Accelerate Arbitrage Fund (TSX: ARB) had positions in two of the three above mentioned deal targets. Guyana Goldfields was ARB’s largest position up until the deal closed this week.

In the U.S., we saw four deals close this month, including Advent’s troubled acquisition of Forescout, in which the buyer got cold feet and tried to walk away. Ultimately, cooler heads prevailed, and the deal proceeded at a lower price.

In August, one deal was terminated. Thermo Fisher dropped its bid for Qiagen after an insufficient number of the target’s shareholders supported the bid. Typically, in a failed deal, the target’s share price drops precipitously post deal break. However, concerning Qiagen, its shareholders refused to tender into Thermo’s bid, given that many felt it undervalued the company. Qiagen’s stock rallied higher after the bid failed. 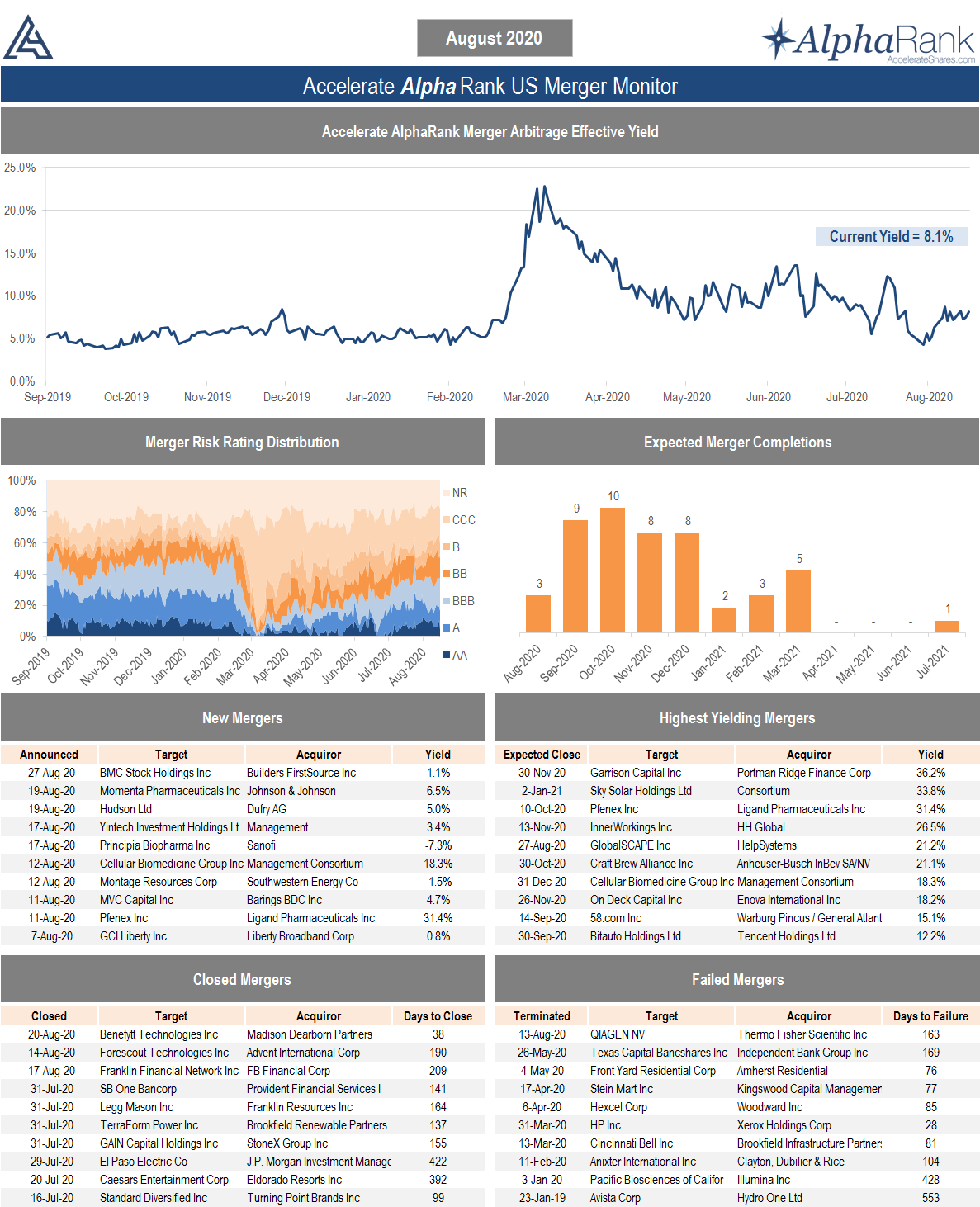 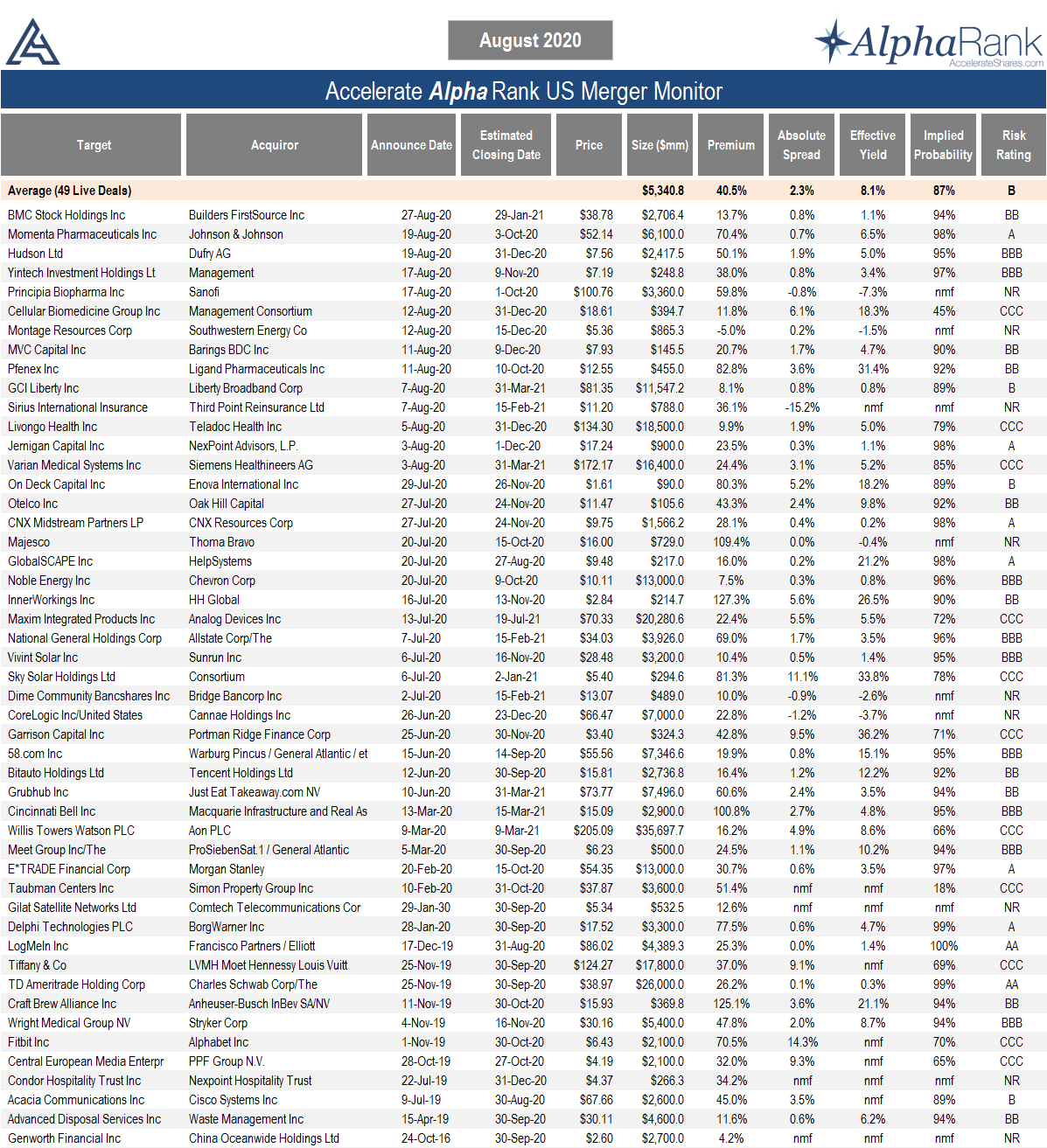