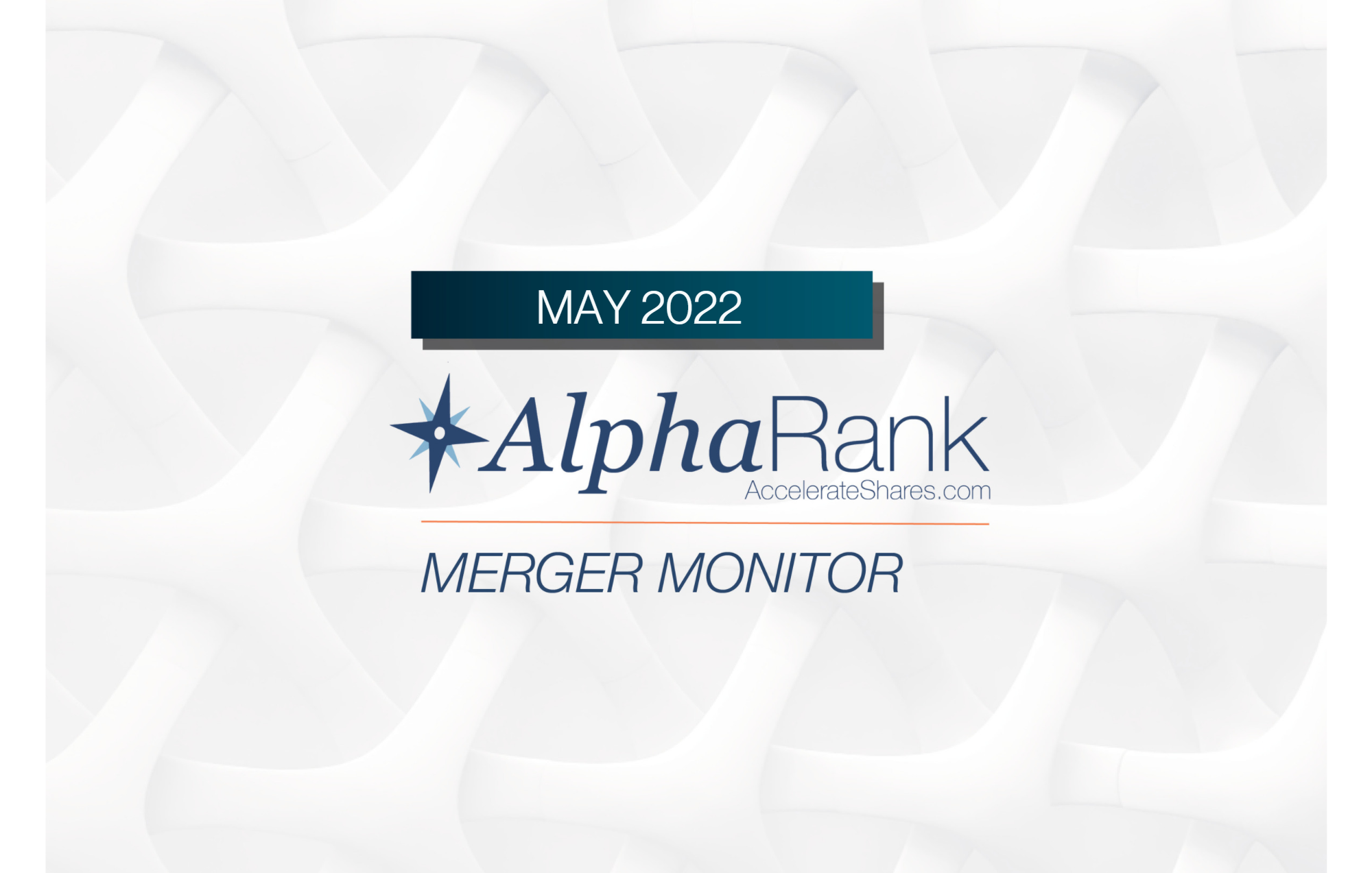 By Damon StreuberMay 30, 2022No Comments
Facebook0Tweet0LinkedIn0

May 30, 2022 – Arbitrageurs can be a fickle bunch, tending to shoot now and aim later at any sign of volatility.

Looking back to March of 2020, when the Covid-induced bear market threw investors for a loop, markets were extremely volatile as investors sold down equities into their quickest bear market plunge on record.

Merger arbitrageurs were no different, selling down their positions at seemingly any price in a “dash for cash” to reduce risk.

When merger arbitrage yields rise above 15%, investors should take note given the juicy prospective returns offered.

For example, merger arbitrage spreads widened significantly as yields rose above 15% (the “red zone”) for precisely 16 trading sessions during the depths of the bear market from March 12th, 2020, to April 2nd, 2020.

After that brief panicked period, prices quickly recovered, and yields steadily declined, bottoming at 5% seven months later. Investors who allocated in the red zone of yields above 15% were handsomely rewarded.

From March 2020, the HFRI Merger Arbitrage Index surged 23.3% over the following 12 months, notching one of its best annual performances on record.

It isn’t very often that investors get a second kick at the can.

Coincidentally, history may be repeating for investors because merger arbitrage spreads recently blew out as market participants became fearful of a potential recession. 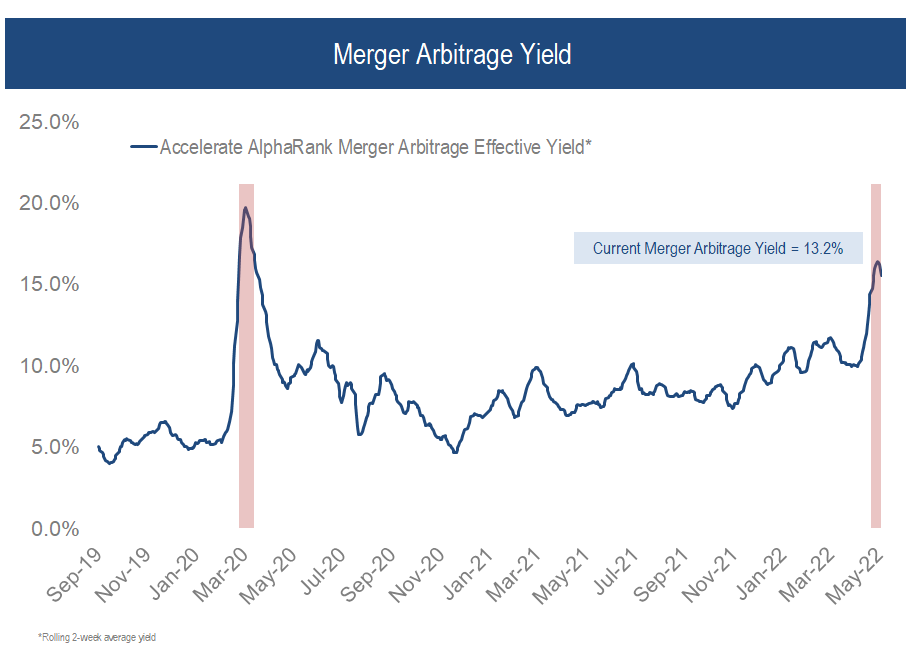 The widening of merger arbitrage spreads was not caused by any fundamental catalyst, given there has not been a failed M&A deal since February. Equity market and interest rate volatility could be blamed as the culprit, however, that seems lazy. Some market participants accuse overeager antitrust regulators, but that rhetoric has been in the market since last summer.

Given the recent relatively violent move in spreads, combined with the large blocks of attractively priced arbitrage opportunities for sale coming across our desk, it seemed as if a hedge fund was derisking their portfolio aggressively. This degrossing dynamic also occurred in March 2020, however, that period was more daunting given the grim economic outlook caused by the pandemic. Currently, it appears that we may be facing only a run-of-the-mill recession.

The last time spreads blew out like this, there was a clear economic reason, and investors who held their nose and bought the dip were rewarded. We are back up to bat and facing the same pitch just over two years later. However, this time the economic and market conditions are less unnerving.

While arbitrage spreads indicate an economic calamity equivalent to March/April 2020, the fundamentals appear not to justify it.

Particularly, deals continue to get announced and deals continue to close. This month, 21 public mergers were reported in North America worth nearly $130 billion, including Broadcom’s massive $69 billion acquisition of VMWare. This huge tech deal (and the largest software acquisition in history) is the biggest M&A transaction since AbbVie’s $85 billion merger with Allergan two years ago. In addition, this month 14 public M&A deals closed worth $43.4 billion, while no mergers were terminated.

If the merger market is in trouble, strategic and private equity acquirors did not get the memo. As a result, deals continue to get completed, despite the market’s skittishness.

Whether allocators to arbitrage will be rewarded with double-digit returns as they did the last time spreads were this wide is to be seen. 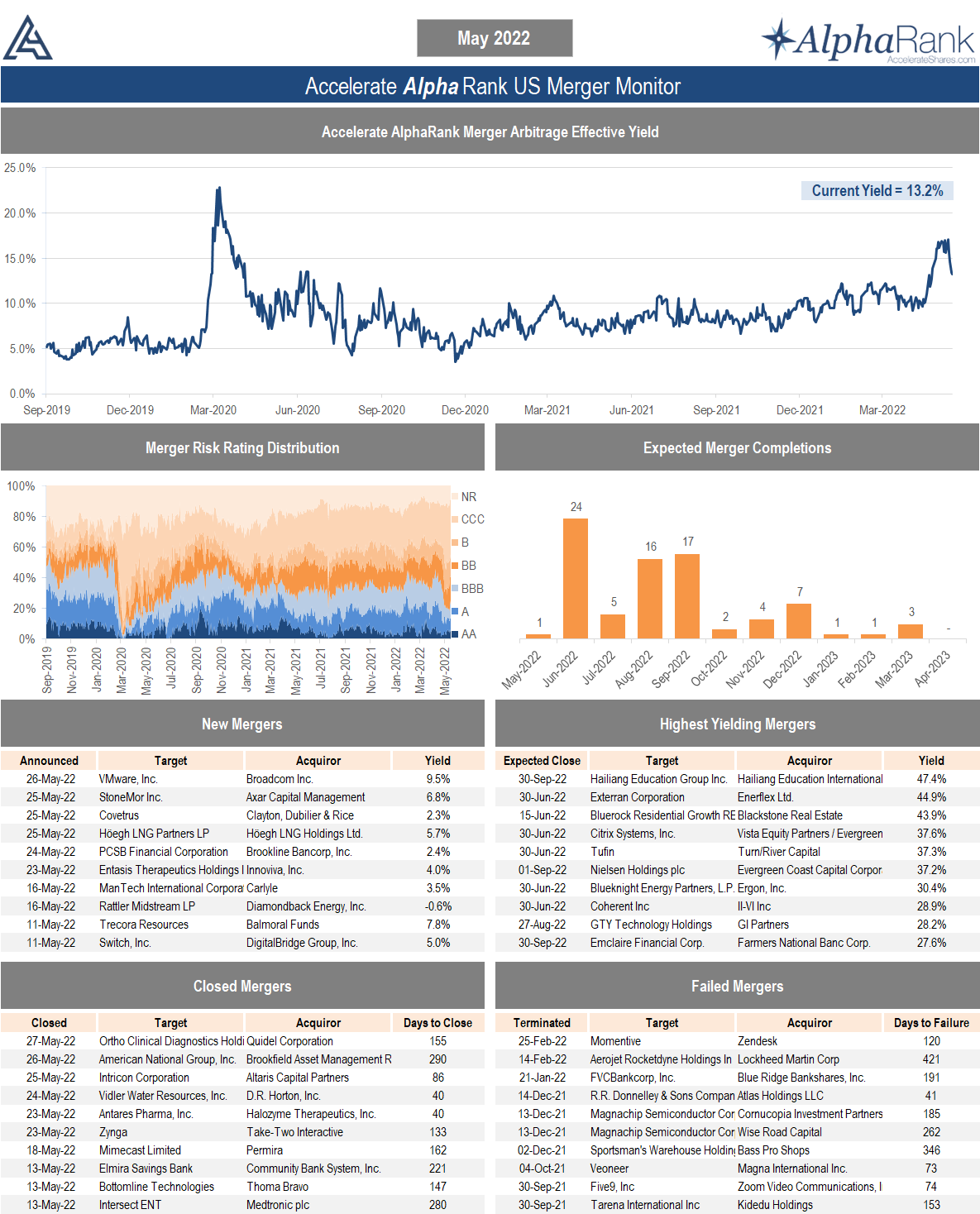 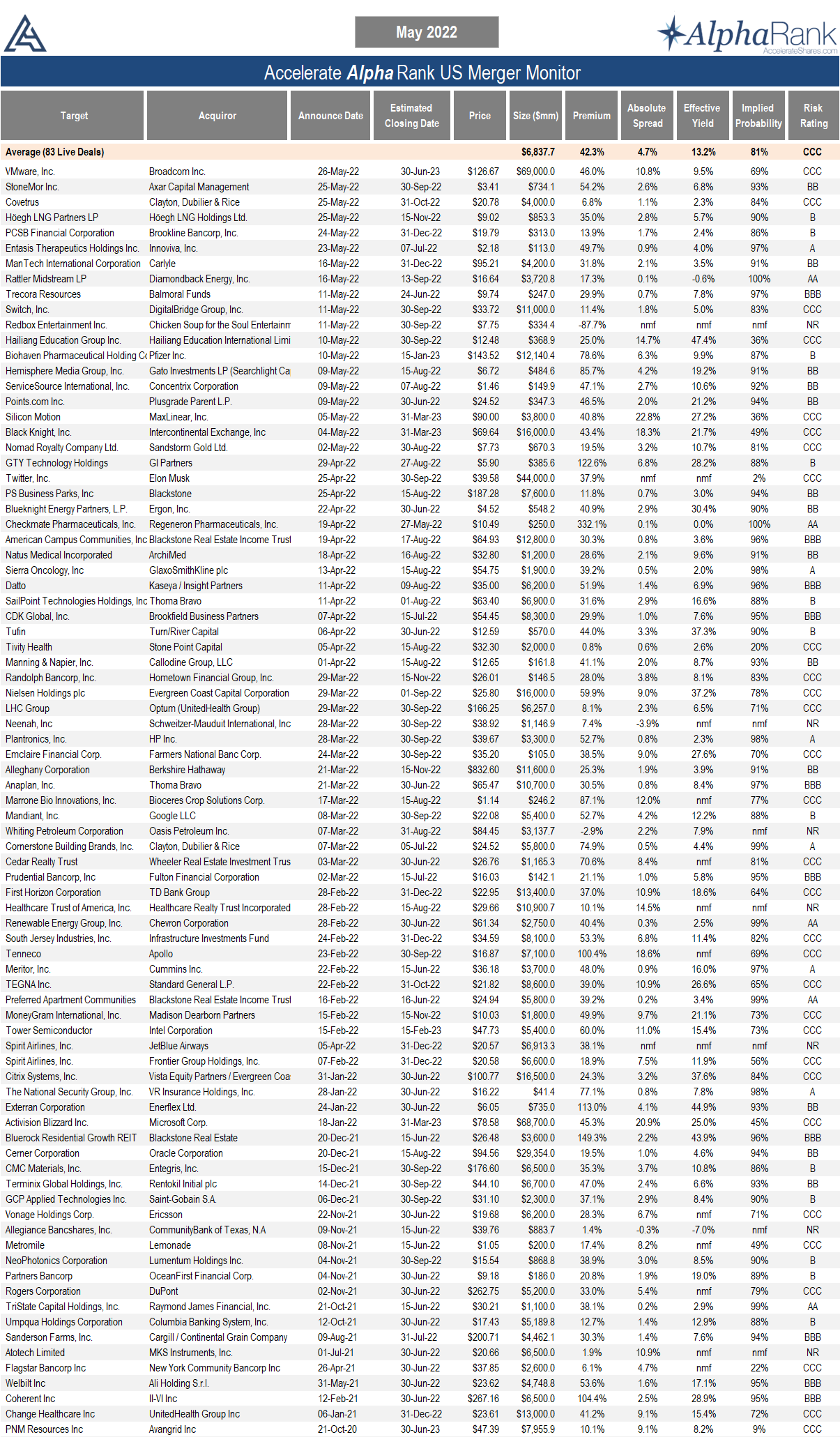