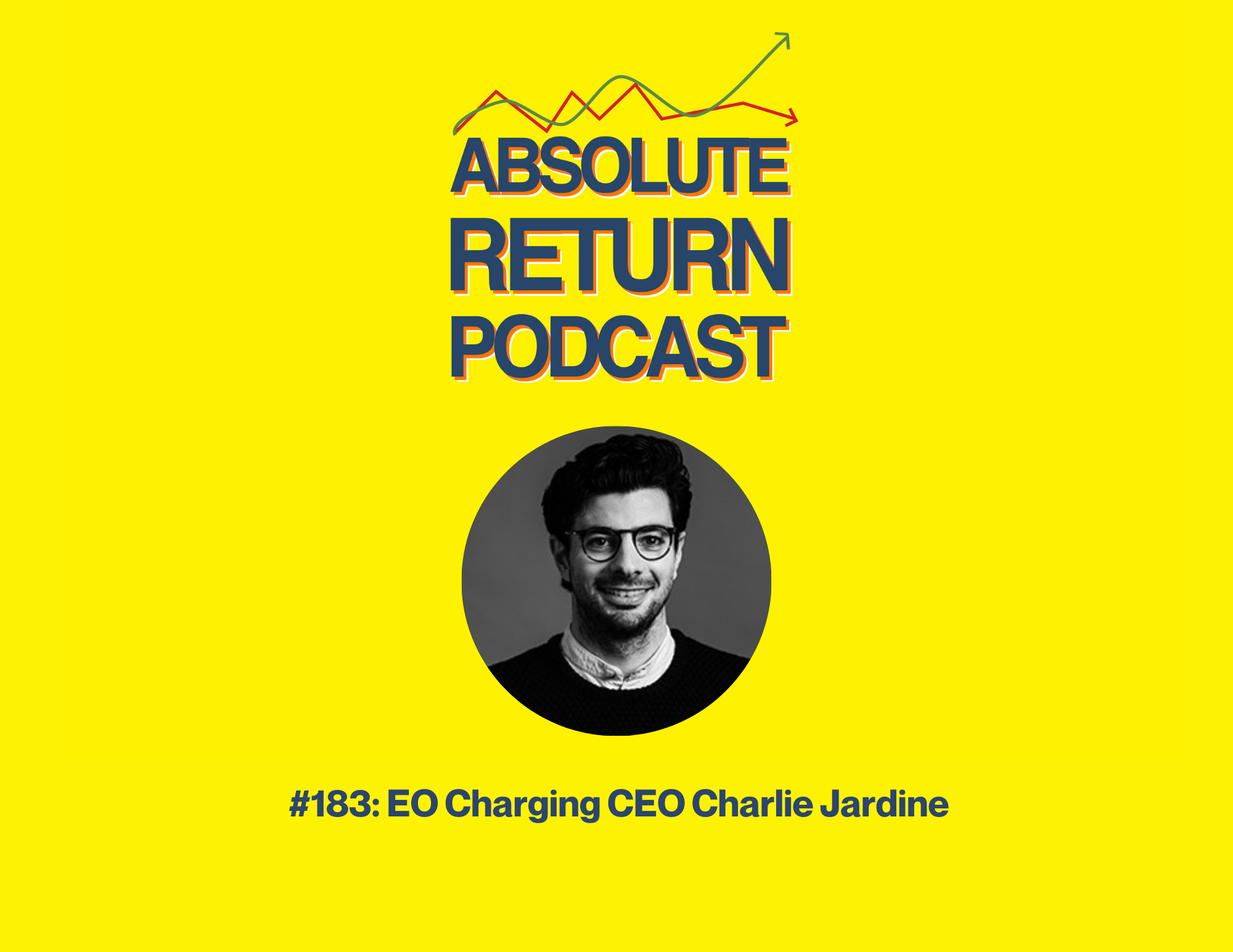 On the podcast, Charlie discusses:

Welcome investors to the Absolute Return Podcast. Your source for stock market analysis, global macro musings and hedge fund investment strategies. Your hosts Julian Klymochko and Michael Kesslering aim to bring you the knowledge and analysis you need to become a more intelligent and wealthier investor. This episode is brought to you by Accelerate financial technologies. Accelerate, because performance matters. Find out more at www.Accelerateshares.Com.

Julian Klymochko: All right, we have Charlie from EO Charging from across the pond. He’s coming at us live from London, UK. So, thanks for making time for us today to talk about EO Charging, which by the way, if you don’t know, we just found out, stands for electricity online, EO, but before we get into the company, Charlie, I’m always interested in founders’ entrepreneurial journeys. Can you tell us where the idea for EO Charging came from and how it developed?
Charlie Jardine: Yeah, absolutely. Well, firstly, thanks for having me, Julian. we started EO in 2014. I used to work for charging company called Pod Point, which is a UK base charge point operator. So, I left university, went to go and work for them and then a bit about EVs and a bit about charging. But after 18 months got to the point where I desperately wanted to work myself. So, left with the kind of [Inaudible 00:01:07] to start a business. And by mid-2015 June agreed to start charging EO Charging in its current format. We started in pig shit, I moved back to my parents’ house and my grandma grandfather gave me one of his old pig sheds and converted it into the state-of-the-art factory.

Charlie Jardine: And we started building out first charging station and starting building some of the software. So that was 2015, and then we launched in 2016 and it’s growing from there.
Julian Klymochko: So, to get up and start it and have your state-of-the-art pig shed, I assume that took some capital, how was raising initial capital for this new venture that you started back in 20 14, 2015?

Julian Klymochko: So, you’ve been on quite the journey over the past seven years from founding and humble beginnings to going to be a SPAC merger. The deal closed this quarter as expected, Q4. So, with that in mind, as a founder, what have been some keys to success?

Charlie Jardine: It’s in 2015, there was no EV market and you just have to keep going. We’ve found ourselves in a really great position. Again, we’ve got a market is coming at us now, and we are right at the forefront of that. So, keep going and stay focused because, you know, fleet was not the biggest part of the market when we started, however, today you look at fleet and you actually probably say, it’s probably the most exciting part of the market, it will be the biggest part of the market. The business model actually makes a lot of sense. In fact, it’s super compelling. And when you compare EO as a business relative to our peers, clearly the business model is super exciting. So, you know, with all of that, again perseverance to stay focused and keep going

Julian Klymochko: There you have it. Perseverance, that’s great advice for entrepreneurs or people who are considering starting their own company. And for EO charging, super cool stories started from humble beginnings seven years ago in London now merging with FRSG in a growing public SPAC deal. Once that closes as expected in Q4, there’ll be trading under the symbol EOC. So, Charlie, thank you for coming on the show today. Really excited to hear your story, and there’s a lot going on, a lot to digest here, but I wish you the best of success in the future.
Charlie Jardine: Yeah, thanks very much.

Julian Klymochko: All right, thanks. Bye everybody.

Thanks for tuning in to the Absolute Return Podcast. This episode was brought to you by Accelerate Financial Technologies. Accelerate, because performance matters. Find out more at www.AccelerateShares.com. The views expressed in this podcast to the personal views of the participants and do not reflect the views of Accelerate. No aspect of this podcast constitutes investment legal or tax advice. Opinions expressed in this podcast should not be viewed as a recommendation or solicitation of an offer to buy or sell any securities or investment strategies. The information and opinions in this podcast are based on current market conditions and may fluctuate and change in the future. No representation or warranty expressed or implied is made on behalf of Accelerate as to the accuracy or completeness of the information contained in this podcast. Accelerate does not accept any liability for any direct indirect or consequential loss or damage suffered by any person as a result relying on all or any part of this podcast and any liability is expressly disclaimed.