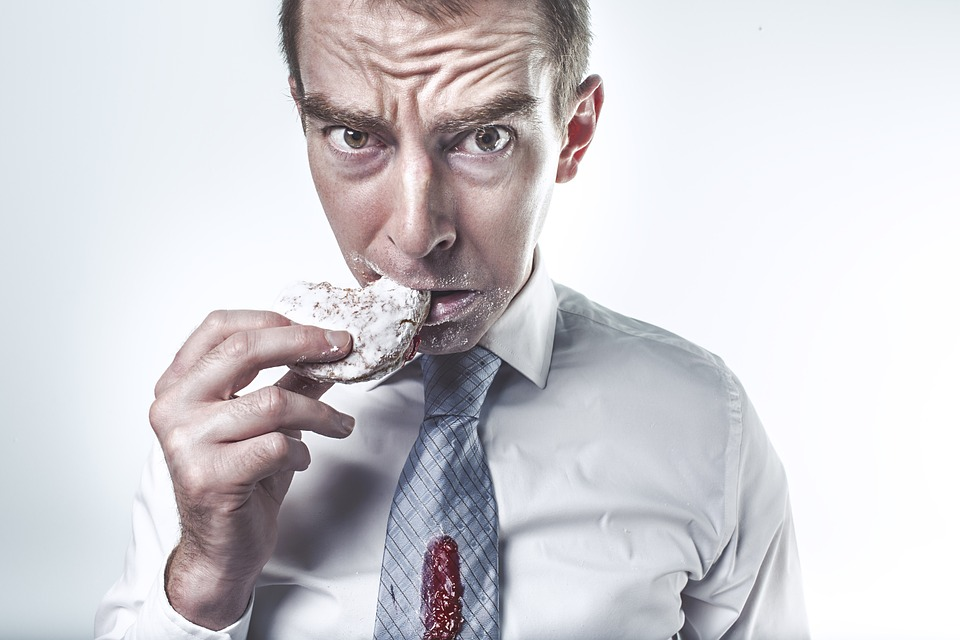 Should Long-Term Investors Worry About a Yield Curve Inversion?

These of course weren’t real headlines, but I digress. The media has focused on the gloom and doom that has historically accompanied a yield curve inversion, sticking with their “if it bleeds, it leads” mantra to get clicks. In turn, some market participants have gotten nervous about the scary headlines and have sold down their equity portfolios and bid up the supposed safe havens of government and corporate bonds.

This was exemplified by the -800 point drop in the Dow Jones Industrial Average on Wednesday, August 14th, its largest decline of 2019 thus far. It can also be seen by the ravenous and seemingly insatiable demand for bonds. As of this writing, bond prices have been bid up so much that there is almost $17 trillion of negative yielding debt globally, including more than $1 trillion in negative yielding corporate debt.

What is a Yield Curve Inversion?

Why Does a Yield Curve Inversion Matter?

Humans are a flawed and primitive species and our brains are not wired for long-term investing. Instinctually, we are all degenerate gamblers, full stop. The human brain is programmed for short term positive feedback. It doesn’t deal with uncertainty and resource depletion (i.e. investments declining in value) very well. In fact, loss aversion drives investor behavior, as the pain felt from a loss is psychologically twice as powerful as the pleasure felt from a gain.

The Problem With Using the Inverted Yield Curve Indicator

If you were certain that the market was going to fall sometime over the next two years by an indeterminate amount, would you sell? And if you did sell, how would you know when to buy back in?

Let’s be intellectually honest – you’re not smart enough to sell at the exact top and then rebuy at the exact bottom. None of us are. No one rings a bell when the market peaks nor do they when it bottoms. If you do get lucky enough to sell at the peak right before a large market drawdown, what are the chances that you’ll actually buy back in? Perma-bears tend to stay perma-bears, and once cursed with the thrill of a correct bearish prediction, they typically tend to make that same prediction over and over.

Even legendary investor Peter Lynch, who averaged annual returns of 29% as manager of Fidelity’s Magellan Fund from 1977 to 1990, knew he wasn’t smart enough to time the market on a short-term basis: “Far more money has been lost by investors trying to anticipate corrections than lost in the corrections themselves.”

If Peter Lynch, with one of the best long-term investment track records of all time, couldn’t do it, how can any mere mortal expect to?

In addition to our inability to properly time tops and bottoms, the issue with using the yield curve inversion to time the market based on precedents, is that historically, the S&P 500 has rallied by more than 15% on average during the 18 months after the yield curve initially inverts and prior to the economy entering a recession. It’s just not a reliable indicator to use in the investment process.

That being said, we do know that the yield curve inversion was a predictive signal for both the tech bust of 2000-2001 and the great recession of 2008-2009. In both these instances, the market went on to be cut in half.

What Should Long-Term Investors Do?

“Don’t Just Do Something, Sit There”

The below graph plots the 10-year Treasury minus the 2-year Treasury yield spread since 1976. An inversion occurs when this spread dips below zero. The current spread is on a knife’s edge, closing at 0.07% (not quite inverted). The grey areas indicate U.S. recessions.

While many investors still have the -56% peak-to-trough decline of the S&P 500 in 2008-2009 seared into their memories, few remember that the market had recouped those painful losses within five years.

Ignoring the sharp, short-term market declines (which is admittedly difficult to do), how would have long-term investors fared had they just ignored the yield curve inversion and did nothing? 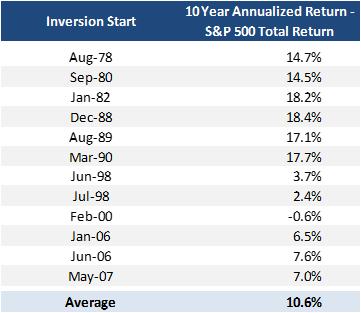 While the headlines can be scary and the short-term market drops stomach-churning, long-term investors can take heed in the historically positive long-term stock market performance following yield curve inversions. The short-term drawdowns can be gut-wrenching, however investors with a long-term perspective should stay the course and reap the rewards granted to those willing to hold through the tough times.