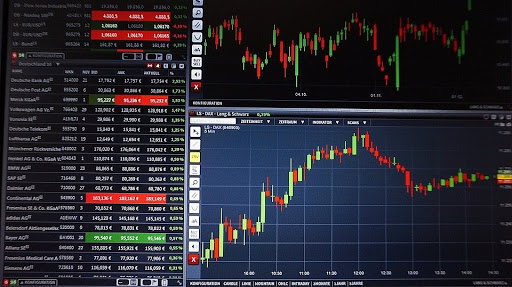 Live From the Trading Desk: Low-Risk and 100%+ Upside with the DiamondPeak Arbitrage

By Mike KessleringOctober 14, 2020No Comments
Facebook0Tweet0LinkedIn0

October 14, 2020  – The holy grail has been a long sought-after treasure that promised either endless happiness, eternal youth or infinite abundance. Due to its purported legendary benefits, the mythical holy grail’s discovery has been the most epic of quests and many have pursued it for centuries.

In the 1989 action-adventure classic, Indiana Jones and the Last Crusade, the film’s hero goes on an expedition to recover the long-lost mythical relic. Indiana and his fellow adventurers successfully navigate a dangerous path to come upon the grail, guarded by a knight in a temple who had been protecting the holy grail for centuries. Confronting the puzzle of selecting the real holy grail amongst a myriad of imposter grails, the knight advises the group to “choose wisely, for while the true Grail will bring you life, the false Grail will take it from you.” An associate of Indiana chooses first, ultimately making the mistake of selecting a fake grail, costing him his life.

After carefully selecting the real holy grail from seemingly hundreds of deadly phonies, Indiana Jones briefly recovers the holy grail but watches it fall into a pit in a near-death experience suffered while trying to escape the temple. Ultimately, Indiana loses the grail, however, thankfully escapes with his life.

The Pursuit of the Holy Grail Investment

In markets, investors are continually looking for the holy grail investment. That is, a strategy that earns high returns with low volatility and no down years.

There are several false grails that investors mistakenly believed could lead them to infinite abundance. One such example is short volatility, a put-selling strategy, that prints consistent, low-volatility returns as long as markets stay calm. The false grail of put-selling can turn deadly when volatility picks up, causing its mythical mirage to disappear and sizable losses to spiral out of control. 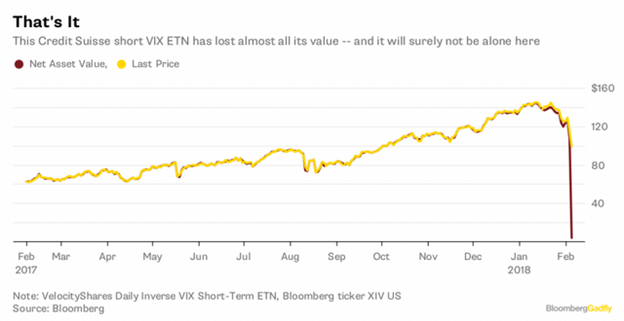 For example, an exotic ETF that provided exposure to a short VIX strategy provided consistent high returns to investors for years. That is until the notorious “volmageddon” occurred in early 2019, when volatility spiked and short VIX related products suffered massive losses. After earning steady returns for years, on February 5th, 2019, the inverse VIX ETF blew up and investors suffered losses of more than -95% overnight.

Is Arbitrage the Holy Grail Investment?

In The Art Of SPAC Arbitrage I stated that “SPAC arbitrage is one of the lowest-risk investment opportunities out there. If done properly, there is little downside risk, assuming one isn’t forced out of the position at an inopportune time.” In addition, I claimed that SPAC arbitrage presents “equity upside combined with the risk profile of treasury bills.”

The special purpose acquisition company DiamondPeak Holdings, which was held in the Accelerate Arbitrage Fund (TSX: ARB), demonstrates the exceptional risk-reward dynamic of SPAC arbitrage and makes a solid case for the strategy as the closest thing to a holy grail in investing.

Blank check company DiamondPeak Holdings went public in March 2019 in a $250 million IPO, offering investors units at $10.00. The units consisted of one common share and ⅓ of a warrant to buy shares at $11.50. In April of 2019, the units split into its constituent parts, and the DiamondPeak common shares traded as a separate security.

When the DiamondPeak common shares first started trading, they could be bought below $9.90 per share, representing a -1% discount to its $10.00 net asset value (“NAV”). One year later, in April 2020, the shares could still be purchased for below $9.90, however, by now the NAV of DiamondPeak had grown to $10.15 due to the accumulation of interest earned on the blank check’s T-bill holdings.

The price of a SPAC in relation to its NAV is paramount for SPAC arbitrageurs. Given that a blank check company only holds short-term treasuries and offers the option to redeem the shares for NAV at the end of the SPAC’s life, as long as an investor buys a SPAC at or below its NAV, they can earn a baseline, low-risk arbitrage return. If an investor buys a SPAC at a discount to NAV, the investor will earn at least the yield of treasuries plus the NAV discount over the life of the SPAC (which is generally less than two years).

At its IPO, DiamondPeak had two years to complete a business combination. By early 2020, it had only one year left prior to its deadline to complete a deal, and if it didn’t it would return the money, plus accrued interest, back to investors.

Buying in April 2020 at $9.90, while its NAV was $10.15 and its redemption was about one year away, gave investors a worst-case investment scenario of nearly 3.0%. Now a 3.0% return isn’t anything to write home about. However, in an environment where Treasury bills yield 0.1%, a 3.0% near-guaranteed return is compelling (assuming one can hold the SPAC until maturity).

Nevertheless, the 3% annualized return was only the downside scenario in the investment. Where the case to be made for SPAC arbitrage as the holy grail investment is not only due to its low downside risk, but it’s tremendous upside in certain cases.

Specifically, DiamondPeak Holdings was one of those cases that exhibited the high upside potential of SPAC arbitrage. In early August 2020, DiamondPeak announced its business combination with electric vehicle company Lordstown Motors. Certainly, the EV space is one of the hottest sectors at the moment, as shown by the share price performance of companies such as Tesla.

The Lordstown deal was no different. Investors were emphatic about DiamondPeak’s merger with Lordstown, bidding up its stock from just over $10.00 to as much as $31.80 per share. With keen investors bidding the stock price well above NAV, it allowed SPAC arbitrageurs, who had previously bought the shares at or below $10.00, to exit at a tidy profit. Actually, that profit was a little more than just tidy. In fact, that 3% expected return then turned to more than 100%, given DiamondPeak shares have been consistently trading well above $20.00 per share.

Protect the Downside and the Upside Will Take Care of Itself

The holy grail investment strategy doesn’t just earn an attractive return, but it does it while managing risk effectively. If one has a positive expected return in the bear case scenario and high upside in the bull case scenario, that is about as close as one can get to the holy grail of investing.

The case of DiamondPeak demonstrated this dynamic successfully. The Accelerate Arbitrage Fund acquired its shares below $10.00 in April 2020, such that the downside scenario offered a low single-digit annualized return. After the Lordstown deal was announced, which sent the shares skyrocketing, the Fund systematically exited the position before the transaction closed, which is expected to occur in late October. 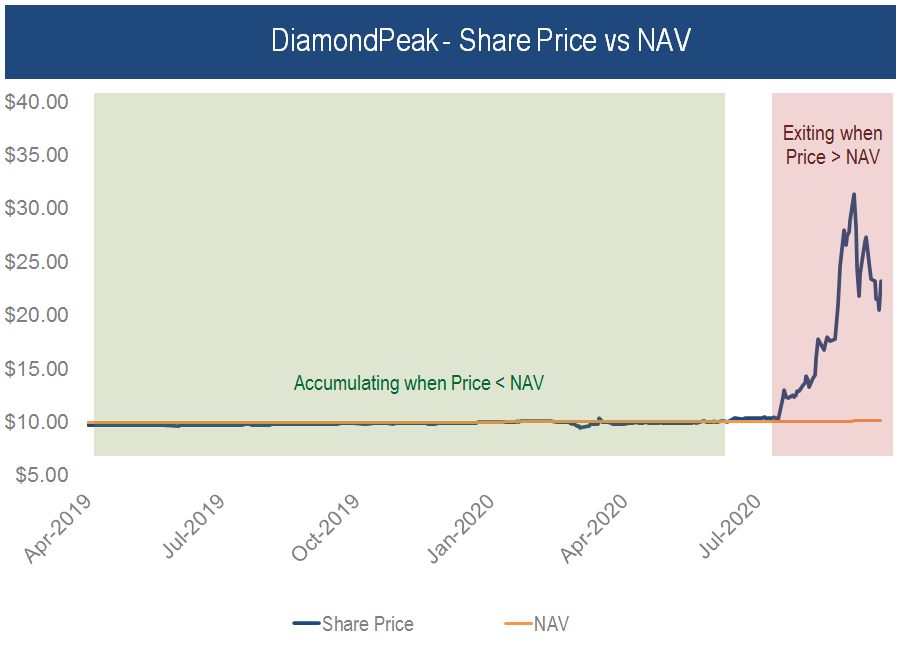 It isn’t just DiamondPeak that offered this high upside return scenario. Other positions held currently or previously in the Arbitrage Fund, including Landcadia Holdings II (LCA, up 41%), Fortress Value Acquisition (FVAC, up 39%), dMY Technology Group (DMYT, up 20%) and others offered high upside return scenarios due to the announcement of business combinations that the market deemed to be attractive. These specific positions were not nearly as lucrative as DiamondPeak’s 100%+ return, but they still offered holders more than adequate returns of 20% to 50%.

Given this exceptional risk-reward dynamic in pre-deal special purpose acquisition companies, the Arbitrage Fund has allocated 68% of its portfolio to SPACs. ARB currently holds 78 SPACs in its portfolio, of which 66 are pre-deal with the optionality for high upside returns if a deal is announced in which the market likes. ARB is systematically exiting the few post-deal announcement SPACs held in its portfolio, crystallizing sizable gains where available.

The DiamondPeak investment has been completed, however, ARB currently holds over 60 investments with similar potential upside.

A Unique Environment for an Exceptional Risk-Reward Dynamic

There has been a boom in special purpose acquisition company IPOs, with about $50 billion in new issuance year-to-date. The SPAC asset class is now worth more than $80 billion, up from less than $25 billion in April.

The tremendous growth in SPAC supply has not been accompanied by a commensurate boom in demand for SPACs. Arbitrageurs only have so much capital, and it certainly has not increased by $50 billion year-to-date (no even close!). Given the imbalance between supply and demand, most SPAC IPOs have been trading poorly and falling below net asset value. This pricing dynamic is offering those willing to invest in SPAC arbitrage the potential to generate attractive low-risk returns, especially with the upside optionality that we see in this environment, as displayed in the case of DiamondPeak Holdings.

I must caution investors that, just like Indy’s quest for the holy grail in the Last Crusade, the implementation of a SPAC arbitrage strategy is not for everyone. It is full of potential pitfalls and boobytraps, including corporate actions such as redemption dates, votes, splits and business combinations. Some blank checks hit with great business combinations that send their share prices well above NAV and allow investors to monetize the “SPAC pop”, while some do not. Therefore, to properly run the strategy, it is imperative to have a highly diversified portfolio of pre-deal SPACs (over 50 holdings), given you never know which is going to hit and when. In addition, just like Indiana and his band of adventurers successfully navigated the temple to find the holy grail, a team of investment professionals is required to successfully run a SPAC arbitrage strategy, which includes daily monitoring and trading of SPACs in relation to their NAVs, constant model updates for over 200 blank check issues, IPO tracking and close observance of corporate actions. One mistake regarding a corporate action can be perilous to a SPAC arbitrageur.

For the past number of months, I have been encouraging investors to allocate to SPAC arbitrage: “I’ve been pounding the table for so long that my hand is damn near broken.” Given the exceptional risk-reward characteristics of SPAC arbitrage in the current environment, it may be the closest thing to the holy grail in investing.