How to Earn a 12% Return with Low Risk

By Mike KessleringDecember 7, 2020No Comments
Facebook0Tweet0LinkedIn0

December 7, 2020 – No asset class has skyrocketed in popularity in 2020, as did the special purpose acquisition company. From backwater to front page news, it appears that everyone and their dog are trying to launch a blank check this year.
2020 is the Year of the SPAC

SPACs, also known as blank checks, grew from less than $25 billion in market capitalization eight months ago to an asset class that now exceeds $100 billion. 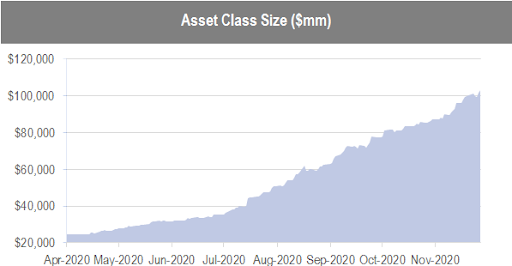 It isn’t too often we see an asset class quadruple in size in eight months. 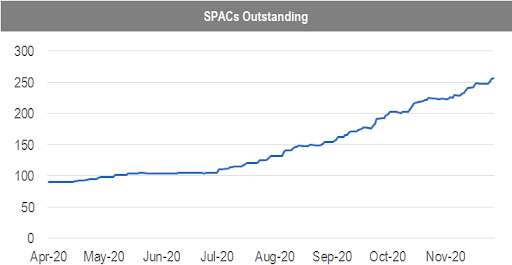 Since April of this year, the number of SPACs outstanding has risen from 90 to 256.
One market dynamic feeding the SPAC issuance frenzy has been the tremendous economics earned by SPAC arbitrageurs, who are the group of investors subscribing to blank check IPOs.

What is SPAC Arbitrage?

A SPAC is born when it completes an initial public offering. In the IPO, a SPAC typically offers units to investors for $10.00 per unit. Each unit consists of a common share and a fraction of a warrant. Units contain anywhere from 0.2 warrants per unit to as much as a full warrant per unit. The warrant terms are such that they offer the investor the option to buy more shares at $11.50 per share in the future (as long as five years), giving a SPAC unit investor further upside on the company’s performance.

Capital raised in the IPO is placed in a trust account, which is tightly governed. This capital may only be invested in the safest securities – typically US treasuries of tenors less than 185 days. The capital raised in the IPO remains in the trust account accruing interest and is only used to acquire a company or distribute to redeeming shareholders. The IPO proceeds in trust remain untouched until a deal vote, business combination or company liquidation. A SPAC has limited time to complete an acquisition – typically 12 to 24 months.

The key aspect of SPAC arbitrage is the untouched capital from the IPO invested in risk-free US Treasury bills. These Treasury bills provide investors with a baseline return of short-term treasury yields, combined with a set deadline offering the ability to redeem shares for the underlying net asset value (NAV, or the value of the treasuries plus accrued interest) either around the date of the vote for the SPAC’s business combination or its liquidation date.

SPAC arbitrage entails an investor buying a SPAC at or below its net asset value (preferably the units, but can be shares only). This disciplined buying provides the investor with an extremely low-risk baseline return of US treasuries, manifested through the SPAC’s NAV, plus the amortization of any discount at which the investor acquired the securities.

In addition to this low-risk baseline yield, which is crystalized upon a SPAC’s redemption or liquidation, a SPAC arbitrageur can earn additional return from upside optionality, or the lift SPAC’s shares and warrants receive upon deal announcement: 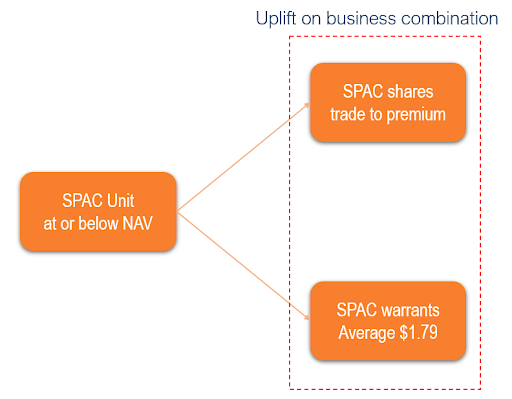 This SPAC arbitrage return, including yield plus upside optionality, was recently quantified in the recent academic study, A Sober Look at SPACs:

“Among the 2019-20 Merger Cohort, the mean annualized return for [SPAC] IPO investors that redeemed their shares was 11.6% – for a risk-free investment. Returns to redeeming investors include the redemption price plus the market value of their warrants and rights at the time of the SPAC mergers.”

Currently, the average SPAC warrant is worth $1.79 per warrant. These are given to investors who buy blank check units, and IPO investors basically get them for free.

As portfolio managers of the only SPAC-focused ETF, the Accelerate Arbitrage Fund (TSX: ARB), we cannot say that the trade is risk-free as the researchers did, however, we believe it is low-risk. We must caution investors of potential risks and pitfalls in the strategy because mistakes can come with the risk of substantial loss. Similar to Warren Buffett’s investing strategy, SPAC arbitrage is simple but not easy.

Nonetheless, an 11.6% low-risk return is exceptional in an environment in which safe government bonds yield less than 1% and investment grade corporate bonds yield approximately 2%.

It is worthwhile asking, does the current SPAC opportunity set yield the potential for future returns similar to the 11.6% return it earned last year?

Quantifying the Upside in SPAC Arbitrage

As indicated above, the upside optionality in SPAC arbitrage, the segment of SPAC arbitrage that can boost returns above the baseline yield, manifests itself once a blank check company announces a business combination.

There are currently 53 SPACs that have announced but not yet closed a business combination.

In terms of timing, on average a business combination was announced 373 days, or roughly one year, after a SPAC’s IPO.

The dynamic in which SPACs that have announced business combinations trade to significant premiums means that IPO investors can expect upside of 34% to 49% in one year. For example, in the current environment, SPAC investors buying units at $10.00 in an IPO can expect these units to be worth around $14.00 on average one year from now, assuming current market conditions persist.

The upside optionality is earned only if a SPAC strikes a business combination. This year, the vast majority of SPACs have been able to sign a deal. Just one of the past 37 SPACs has liquidated without announcing a deal.

What Can Investors Expect

In the current environment, given the tremendous upside optionality of 34% to 49% of SPACs that announce deals, investors may expect a higher return than what was earned last year.

A US President once said, “Protect the downside and the upside will take care of itself.”

SPAC arbitrage protects the downside, given the redemption and liquidation mechanisms in which investors get their money back plus accrued interest in two years or less.

The significant upside optionality offered by SPACs in the current market environment certainly takes care of itself.