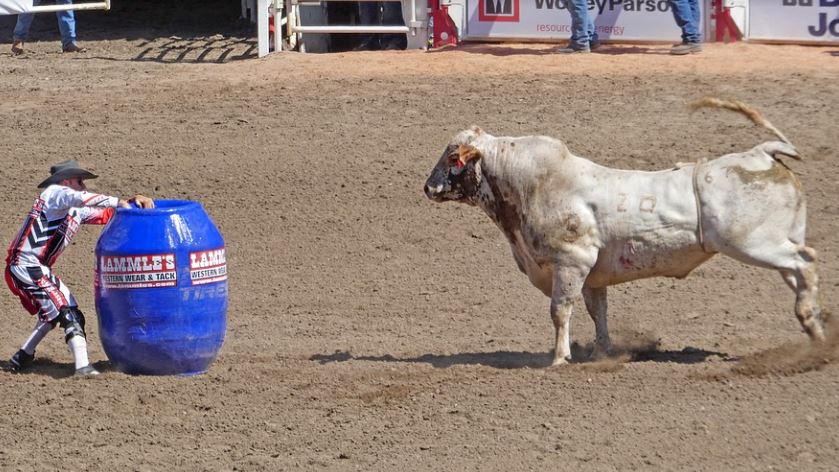 By Damon StreuberAugust 11, 2022No Comments
FacebookTweetLinkedIn

In Keynes’ 1936 book, The General Theory of Employment, Interest and Money, he stated:

“Even apart from the instability due to speculation, there is the instability due to the characteristic of human nature that a large proportion of our positive activities depend on spontaneous optimism rather than on a mathematical expectation, whether moral or hedonistic or economic. Most, probably, of our decisions to do something positive, the full consequences of which will be drawn out over many days to come, can only be taken as a result of animal spirits – of a spontaneous urge to action rather than inaction, and not as the outcome of a weighted average of quantitative benefits multiplied by quantitative probabilities.”

The market’s animal spirits can irrationally drive share prices higher, as market participants are urged to put money to work based on positive sentiment and not rational quantitative investment analysis.

These animal spirits were on full display in July, as investors jubilantly bid up risk assets and enjoyed rallying markets.

With the recession, defined as two consecutive quarters of negative real GDP growth (despite the Government now trying to change the definition), likely behind us, is it smooth sailing ahead?

Several issues that should be concerning to investors: 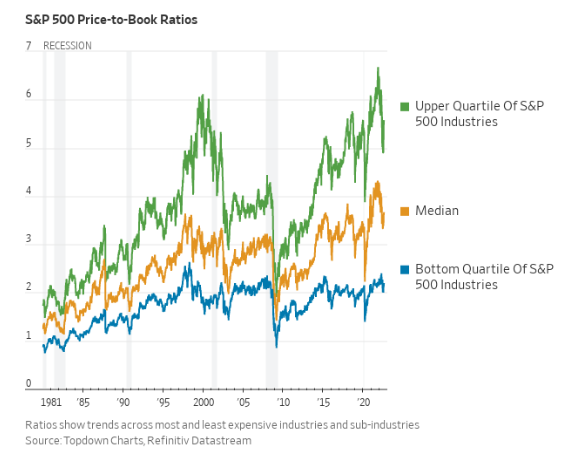 With the recent resurgence of speculative securities, the valuations of growth stocks are back near record levels. While value stocks remain reasonably priced, growth stocks are trading at their dot-com bubble highs. Despite the correction in the Nasdaq, a substantial downside for overvalued stocks exists, especially in an environment of higher interest rates.

The so-called equity risk premium, defined as the difference between the earnings yield of stocks and long-term Treasury bond yields, had been the last bastion of U.S. growth stock bulls. However, rising interest rates have compressed the equity risk premium, indicating lower valuation multiples are justified, meaning the bull case no longer holds and that equity valuations should fall. 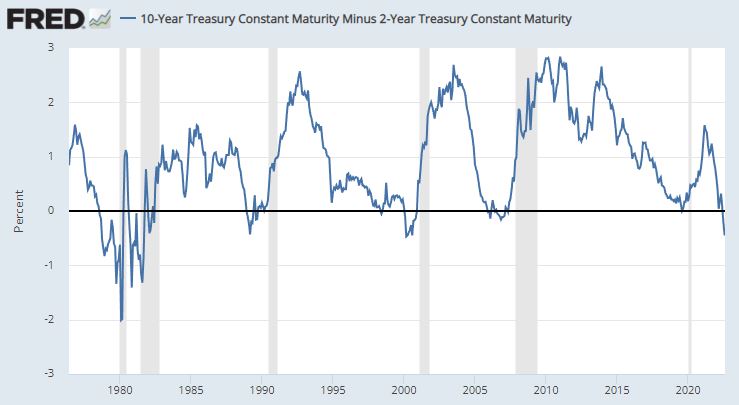 Whether the first half was a recession or not is irrelevant at this point, given that if it was a recession, the economy is likely through it already. Historically, by the time the National Bureau of Economic Research anoints it a recession (on average 7 months after it starts), the recession is usually over. That economic signal is completely useless. Nonetheless, the yield curve has an undisputed track record of forecasting recessions, and the forecasting aspect is what matters to investors. As shown above, the yield curve is steeply inverted and is now on red alert regarding a 2023 recession.

What is not debatable is the sluggish economic growth conditions and risks of stagflation in a rising rate environment, making it challenging for both stock and bond investors. 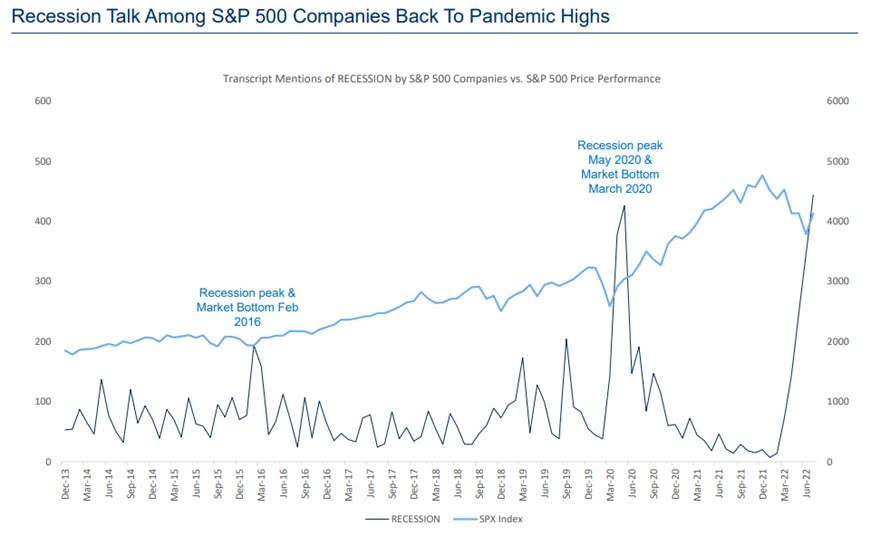 Recessions can be a self-fulfilling prophecy, coming to fruition due to consumers and businesses pulling back spending and investing because of negative expectations and poor sentiment. What company wants to go on a hiring spree when talks of economic decline are ubiquitous? In effect, it is the reverse of animal spirits. Recently, corporations mentioning a recession on their earnings calls have surged to a new high. If pessimistic economic sentiment becomes pervasive, it can manifest itself throughout the economy, leading to weaker market conditions and a higher unemployment rate.

In any event, the outlook for 2023 appears dour and highly uncertain. 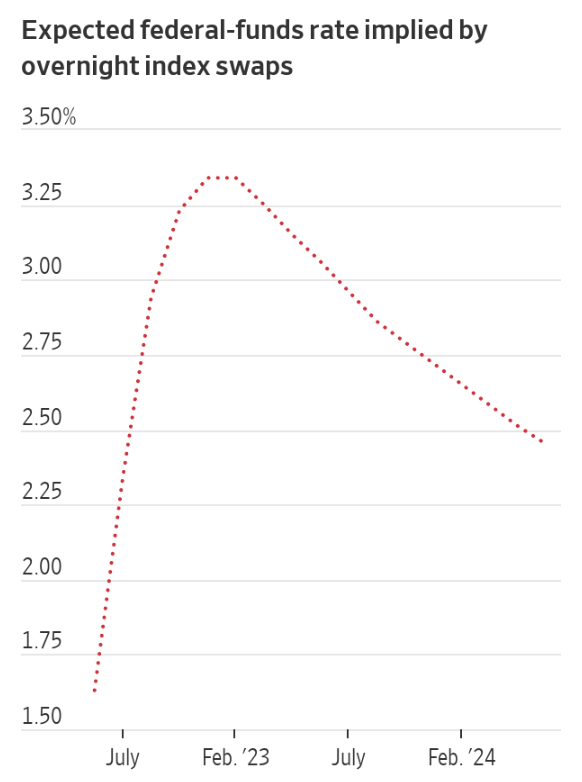 The market is pricing in 75bps of interest rate cuts in 2023, an event that typically occurs in a recession or an equity bear market (the so-called “Fed put”). This forecast rate cut, a signal of an expected easing of financial conditions, is what lit a fire under speculative assets in recent weeks. Moreover, central bankers continue to deny the economic forecasts of the market, maintaining their path of higher interest rates. A higher rate environment will likely be a headwind for stocks and bonds, given the increased discount rates applied to traditional risk assets. Currently, investors must balance two market axioms: “The trend is your friend until it ends,” and “Don’t fight the Fed.” Things could go either way. 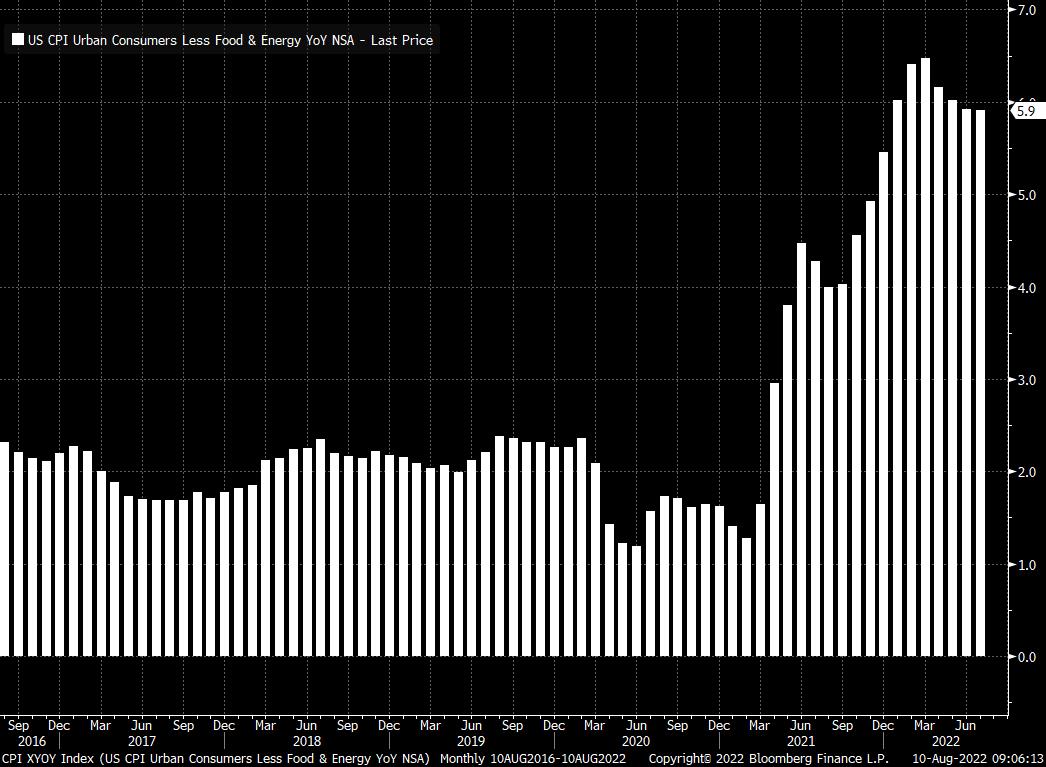 One trend that appears to be reversing is that of skyrocketing inflation. The consumer-price index rose 8.5% from a year earlier, compared to the 8.7% forecast by economists, and slowing from June’s 9.1% pace. In addition, the monthly change in CPI in July was 0.0%, a positive development on the Fed’s inflation-fighting front. While inflation remains near 40-year highs, the recent trend of four months in a row of declining core inflation, which has dropped from 6.5% to 5.9%, is encouraging that consumer price increases will not spiral out of control and create disastrous economic consequences.

Please make no mistake about it, monthly CPI prints are the key driver of risk asset returns in the near term. And where inflation meanders over the next several months is anyone’s guess. 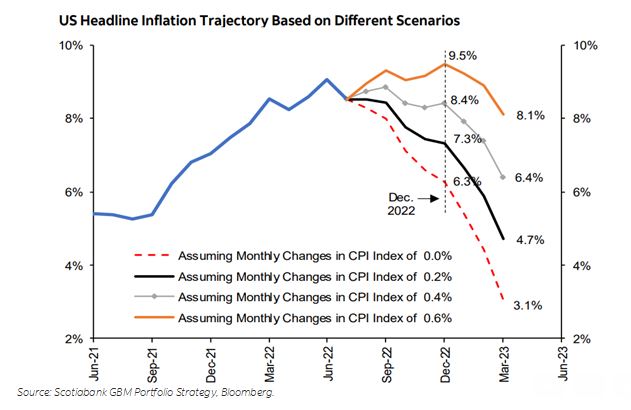 With much uncertainty regarding the path of near-term inflation, the best bet for investors is to diversify to fortify their portfolios so that they can thrive under any economic scenario.

ARB notched higher in July with a 0.1% increase. However, both SPAC arbitrage and merger arbitrage yields remained wide over the month, with SPAC yields staying at 5.5% and merger yields falling slightly from 14.0% to 13.1%.

Despite the wide spreads, merger arbitrage remains fairly uneventful. Merger deals continue to close as expected, with the capital returned being reinvested in new arbitrage opportunities. Notwithstanding a rocky equity market, unstable financing conditions, unpredictable antitrust regulations and a recessionary economic environment, M&A activity is as busy as ever. Both private equity and corporate acquirors remain highly active in putting capital to work through mergers and acquisitions. The exceptional environment for M&A has made arbitrage investing relatively straightforward given the robust opportunity set and high yields available.

On the SPAC side, it remains a buy-to-redeem strategy. Given the depressed market sentiment for blank check companies, pre-deal SPACs no longer “pop” upon deal announcement. This lack of deal pop has reduced the upside optionality of the strategy. Nonetheless, as the market continues to come into balance (SPAC supply still vastly exceeds demand), we believe the market will begin evaluating SPAC mergers on fundamentals once again. A SPAC market trading off fundamentals will allow some deal SPACs to trade above NAV, leading to higher returns for the arbitrage strategy. However, when that happens is anyone’s guess. For now, we’ll settle for the 5%+ low-risk arbitrage yields offered by discounted SPACs through redemption.

Despite poor multi-factor performance, led by surging “junk” stocks, HDGE manage a 5.0% return in July given its approximately 110% long exposure more than offset its 50% short exposure.

U.S. long-short multi-factor portfolios struggled in July, with overvalued, low-quality and poor momentum stocks that make up short portfolios all surging over the month. For example, overvalued stocks jumped 13.8% last month while undervalued issues were up just 9.6%. Low-quality stocks rocketed 15.8% higher while high-quality securities gained 11.7%. In all long-short portfolios, the longs underperformed the shorts.

It felt like a short-covering kind of month, which sent many heavily shorted names higher. Nonetheless, it is reminiscent of a dead cat bounce for many of the junk stocks in the HDGE short portfolio.

ONEC bounced back with a 4.6% gain last month.

Despite the generally uncorrelated nature of ONEC’s ten alternative allocations, all of them fell in June and nine of ten rose in July. While their correlations tend to be low, they are dynamic and change over time. It is an ongoing challenge for capital allocators and an issue we think about religiously. We believe that positive expected returns with low or negative correlation to traditional asset classes are the core tenet of diversification.

The sole monthly decliner was the yellow metal with a -3.5% drop. If at the start of the year you would have told me that inflation would be at a forty-year high of 8.5% while the Fed Funds rate was below 3%, I would have forecast that gold would have a banner of up more than 20%. Alas, it certainly has underperformed expectations with a slightly negative return year-to-date. Despite recent underperformance, the case for a small inclusion of gold in a diversified asset allocation framework remains rational.

ATSX gained 4.7% while its benchmark, the TSX 60 Total Return, increased 3.9%. ATSX’s long-short overlay portfolio added 0.8% of its performance in July.

One abundantly clear thing is that there is far less short selling in Canadian equities than in the U.S. We see the short interest figures in our portfolio rebalance each month, and the Canadian equity short interest has always been a fraction of that compared to the U.S.-listed shorts in the HDGE portfolio. We believe this makes ATSX less prone to short-squeeze dynamics. It is unclear whether short-term (temporary) short-squeezes detract from the long-term performance of long-short portfolios, however, short squeezes of U.S. equities can make for some unpleasant days (that the ATSX portfolio tends to sidestep).