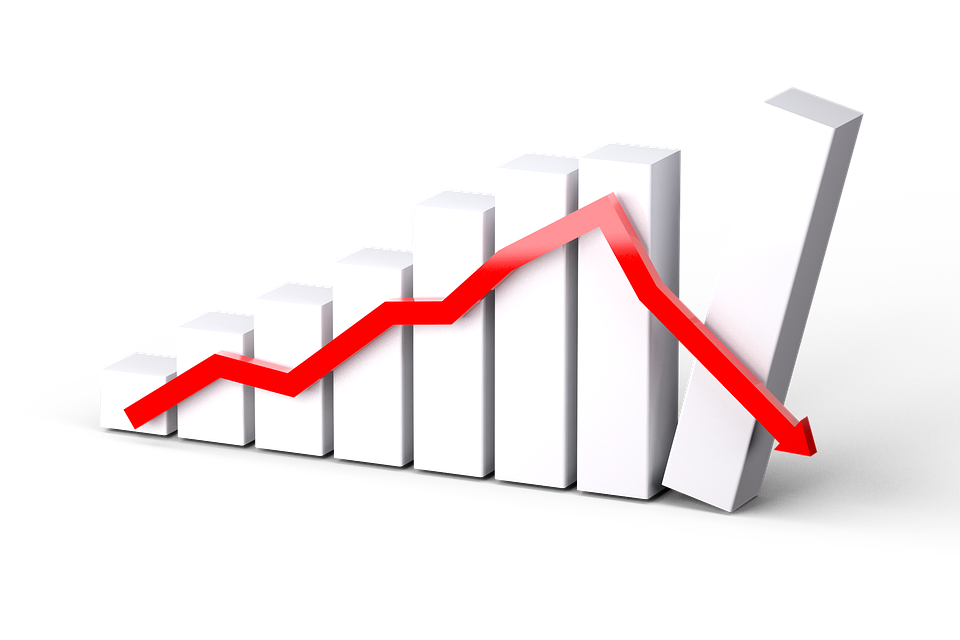 Accelerate Monthly: Is a Recession Inevitable?

By Damon StreuberJune 13, 2022No Comments
Facebook0Tweet0LinkedIn0

June 13, 2022 – With the pandemic and accompanying global recession still fresh on everyone’s minds, it is surprising that we have had approximately two years of economic expansion.

Between 1854 and 2009, there have been 33 economic cycles. The average length of an economic expansion was 3.2 years, while the average recession lasted about 1.5 years. Historically, each full economic cycle lasted 56 months.

With that in mind, it is not irrational to think we are “due” for an economic contraction.

In addition, recent data indicate that a near-term recession is not only likely but highly probable.

Central banks have officially lost control of inflation. As a result, the consumer price index rose 1% from a month earlier and 8.6% on the year, a crushing level of currency devaluation that has not been seen in 40 years. 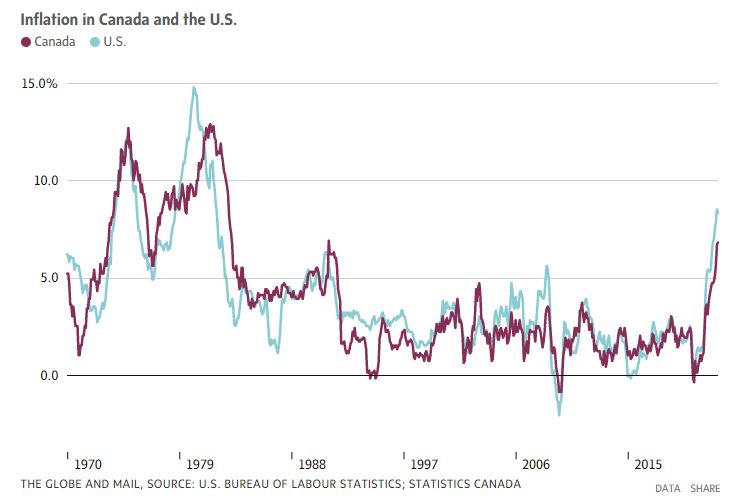 Central banks can no longer pretend that inflation is “transitory”. They have now moved from blaming supply chain issues to calling it “Putin’s price hike”.

Although it is clear that the surge in inflation was caused by massive monetary and fiscal stimulus measures implemented over the past several years, with governments printing trillions of dollars and central banks keeping interest rates too low for too long, at this point, it does not much matter who we blame. As investors, we allocate capital based on forecasts and future expectations. The past is behind us. We are only concerned about the future.

All that matters is that inflation is spiraling out of control and the monetary authorities must do their best to stop it. 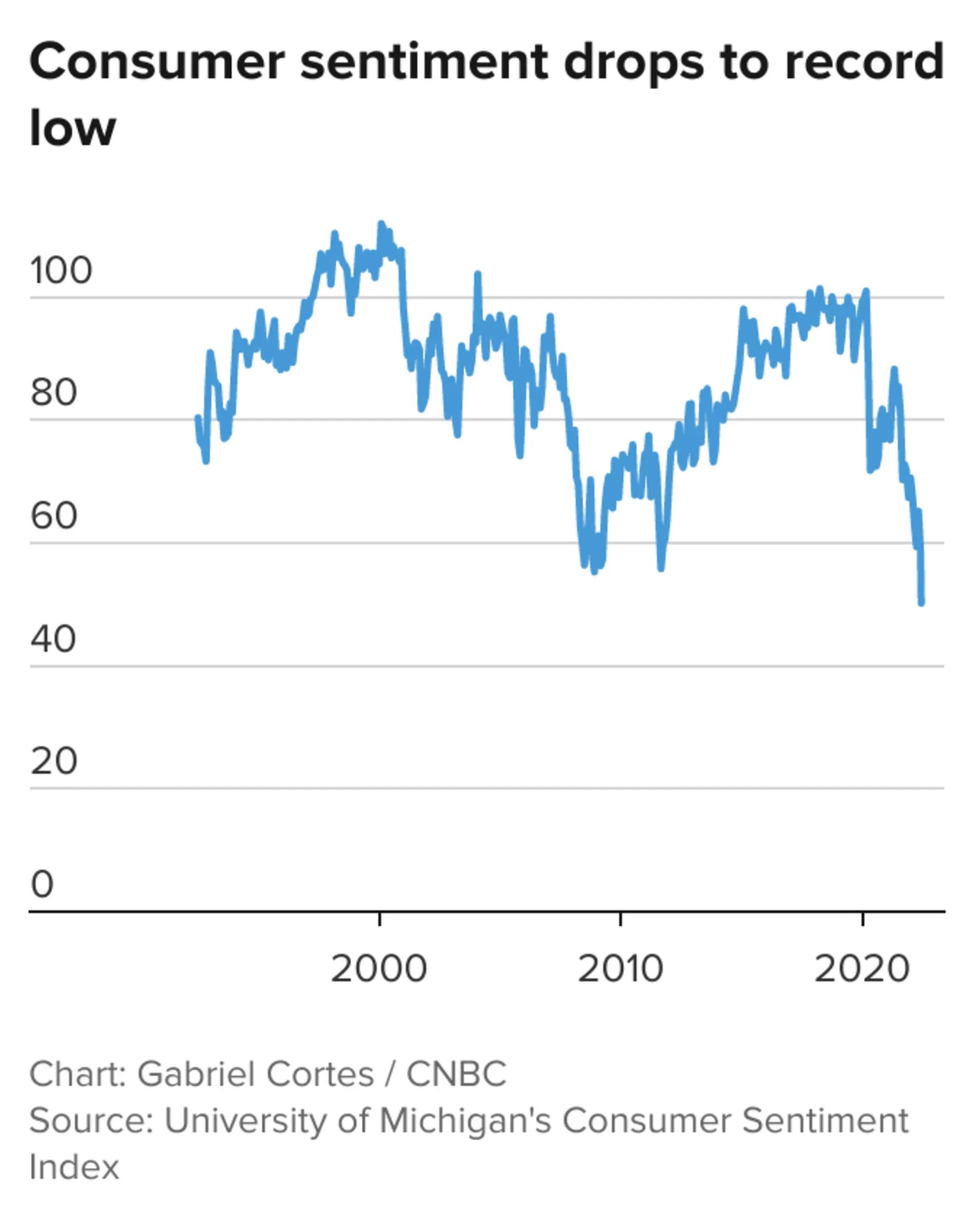 We all feel it – when your weekly grocery bill is now 50% higher on average than last year, it sucks.

When even Cardi B is tweeting about the upcoming recession to her 23 million followers, it is top of mind for many across vast segments of the economy. When enough people prepare for a recession, economic contractions tend to become self-fulfilling prophecies.

As such, monetary authorities have commenced a plan to get inflation back under control, including a pre-set series of interest rate increases and the implementation of quantitative tightening. For the first time in ages, central banks appear to be putting price stability ahead of stock market performance.

Fed-funds futures are pricing in a 50bps rate hike in September, followed by two quarter-point hikes for the remainder of 2022 and two more in early 2023, bringing the Fed’s key policy rate to 3.5% to 3.75% by early next year. Unless the 10-year U.S. Treasury yield rises 100 bps from its current level of 3.0%, the yield curve will become fully inverted soon.

An inverted yield curve portends an economic recession nearly 100% of the time. The Fed is on track to tighten into a recession over the next 9 months.

Now that we can deduce that a recession is highly likely, we need to determine what is priced in the market. The S&P 500 is just 1.6% from an official bear market, and some market participants may feel that the worst is behind us and the market may be already pricing in economic contraction.

Historically, high inflation has been bad for stocks. Inflation within the range of 1-3% per annum has been the golden zone in which equities have maintained high valuations. A level above 5% has been ominous for equities, with valuations coming under pressure in inflationary environments. 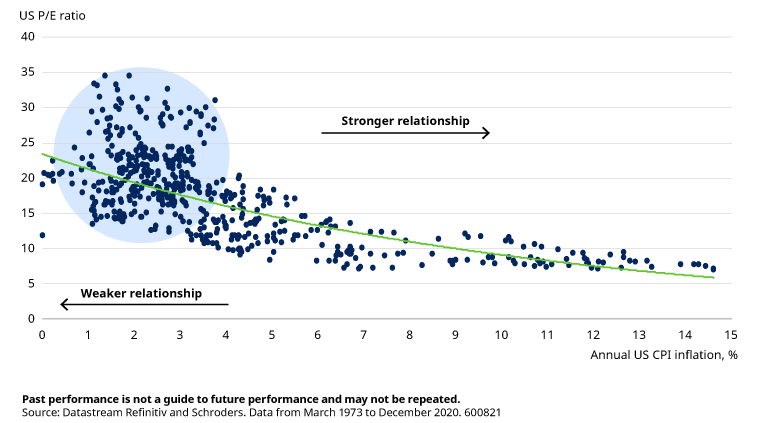 Given the above chart, an 8.6% CPI print implies a market multiple of 11x earnings. The S&P 500 currently trades at nearly 20.0x earnings, therefore, high inflation has not been priced in.

While the S&P 500 is down markedly year-to-date, its valuation is still historically high with respect to a potential recession and high inflation. The current setup does not bode well for near-term stock market performance.

We are coming off the peak of one of the greatest growth equity bubbles in history, rivaling only that of the dot-com bubble. As seen below, growth stocks are trading about 2.3 standard deviations more expensive than average relative to value stocks. Something has got to give. 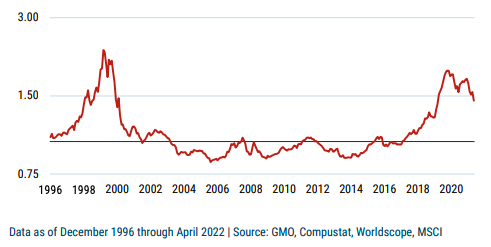 While many high-flying stocks are already down more than -50%, the majority of the air hasn’t left the bubble. It is only year one of a multi-year run of value stock outperformance.

To summarize, given the data showcased above, we can expect the following market dynamics:

Diversification remains an investor’s greatest tool. Expect stocks and bonds to maintain high correlations, as both asset classes continue to correct. Keep durations low on the fixed income side. Focus on value stocks on the equity side. Capitalize on likely weakness in overvalued equities by maintaining a short growth stock bias. Allocate to uncorrelated, and negatively correlated, investment strategies.

ARB declined by -1.1% in June, with both SPAC and merger arbitrage spreads widening.

Equity market volatility has driven merger arbitrage yields above 15% for the first time since the brief period of panic during March 2020. Despite the uptick of fear in the market, and dramatically wider merger arbitrage spreads, no M&A deals have been terminated lately. Meanwhile, 13 M&A deals worth $96 billion have been announced over the past month. In addition, 13 deals worth $67 billion have closed over the same period.

SPAC arbitrage yields have surged to nearly 5%, their highest level on record. The recent volatility has affected SPAC issuance, with just two SPAC IPOs over the past month. However, 15 SPAC mergers were announced over the period while 8 SPAC mergers closed and 3 SPACs were liquidated.

One dynamic affecting SPAC arbitrage returns has been the destruction of the warrant market. For example, the average SPAC warrant has fallen -71% in value year-to-date, from $0.74 to just $0.22. SPAC warrants give arbitrageurs extra compensation for participating in IPOs. While poor SPAC warrant trading has pressured returns recently, arbitrageurs retain upside to any recovery in the market once more normal trading conditions resume.

In any event, SPAC and merger arbitrage yields are materially higher than when ARB launched on April 7, 2020.

The strategy of being long undervalued, profitable stocks while being short overvalued, money-losing stocks, continues to work. We believe this is a multi-year trend in which former high-flyers will continue to come under pressure, while solid companies with substantial free cash flow will keep outperforming. It is a strategy that can work irrespective of the market environment, however, its track record shows that it excels in tough markets.

Since then, it has provided positive returns to investors while exhibiting a negative correlation to the equity index. These returns indicate that HDGE generated most of its returns while stocks fell.

HDGE has functioned as a true portfolio hedge over its three-year track record. However, it has provided insurance-like returns (negative correlation) while providing positive performance for investors. This exposure can be viewed as insurance that investors get paid for owning. In addition, the Fund continues to pay out an attractive yield of 1.8% to investors. What other insurance-like exposure provides that?

Conversely, the mortgage allocation was up 60bps, infrastructure gained 2.3% and long-short equity was up 2.6% for the month.

ATSX is one of a small handful of alternative ETFs now with a three-year track record.

The Fund was launched to provide exposure to the TSX 60 index, plus a long-short equity overlay to reduce downside and mitigate volatility.

Since its inception, ATSX has returned 10.7% annualized. It has provided this return with just 83.5% downside capture, meaning for each 1% the equity index fell, ATSX fell just 0.8%.

In addition, ATSX has outperformed its benchmark, the TSX 60, over the short term and since inception, and has done so with lower volatility. The Fund’s model has proven itself through both bull and bear markets. The Fund’s current 6.7% yield provides an incentive for long-term holding in a diversified allocation.