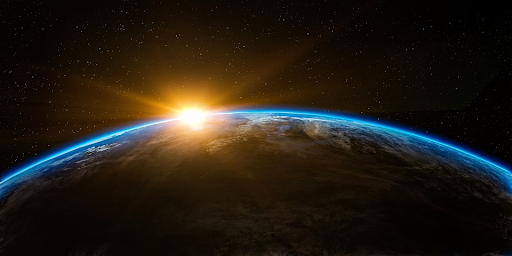 Alpha + Beta: The Next Frontier in Investment Management

February 13, 2020 -The benefit of relentless competition in popular human endeavours is the progression and constant improvement within the activity.

With the advent of more and more data, many activities have been intensely analyzed in the pursuit of a competitive advantage. One of the beneficiaries of this progression is sports, of which basketball is a classic example.

Basketball traces its roots back to 1891 in Springfield, Massachusetts, when Canadian James Naismith created it as a less physically demanding sport than football. At the start, it was literally guys throwing jumpers into a basket.

As the sport grew, many innovations came along to give players and teams competitive advantages (albeit temporarily until competitors caught up). Some of these innovations include techniques such as layups, steals, crossovers and slam dunks.

The current meta in basketball centers on shooting efficiency, which includes the popularization of the three-point shot over the past couple of decades. 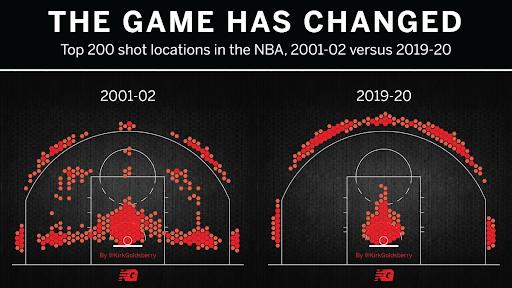 Basketball has evolved such that the most popular shot locations are chosen to efficiently maximize the probability-adjusted shot value. This has caused shots to converge in two places: a two-point shot in the paint or a three-point shot beyond the arc, as shown on the right side of the graphic above.

These opportunities were available because a market inefficiency existed. Attempting a two-point opportunity far out when one could simply take a step back and increase the potential points obtained to three capitalized on this dynamic. Teams that co-opted this strategy prior to their competitors enjoyed resounding success (the Golden State Warriors of 2015 to 2018 being a prime example).

A key to success in any competitive endeavour involves embracing innovations more quickly than one’s competitors. To the early adopters go the spoils.

The Evolution of Investment Management

The staid practice of investment management has evolved incredibly slowly over the past hundred years or so. Innovation is hard to come by, but, thankfully for investors, the occasional breakthrough is made. Ever so slowly, more and more options are opening for investors to help them reach their financial goals.

One hundred years ago, the only asset classes suitable for institutional investors were safe government bonds and perhaps real estate and preferred shares. Between 1929 and 1950, institutions began to branch out, adding high-quality corporate bonds and domestic equities to their portfolios. Over time these investors continued to branch out, adding average-quality corporate bonds and international stocks.

The go-go 1980’s brought a number of innovative new asset classes to investors. Michael Milken’s invention, the high-yield bond, opened investors’ eyes to riskier asset classes that came with the prospect of higher returns. With the emergence of the leverage that high yield bonds and other new financing structures provided, came the proliferation of additional new asset classes such as private equity, leveraged loans and structured credit.

Most investment strategies have become standardized over the past few decades. The late Jack Bogle launched the precursor to the Vanguard 500 index fund in 1976. Initially, the first index fund was a commercial failure, falling about 95% short of its fundraising goal as investors balked at receiving just the market return. Boy, how things have changed over the past 44 years!

In terms of investment options, the S&P 500 is currently Top of the Pops, with sentiment off-the-charts positive. The index’s track record over the past 10 years has made investors feel that it’s unbeatable and its future performance will no doubt be exceptional. The index goes up 10% per year on average, right? While the S&P 500 has provided great returns historically, future investment returns are in no way guaranteed.

Don’t Stray Too Far from the Index

J.P Morgan once said, “Nothing so undermines your financial judgment as the sight of your neighbor getting rich.”

The S&P 500, so ubiquitous that it is just assumed as “the index”, is nearly every investors’ choice of base-case investment allocation. It has become so ingrained in investors’ psyche that most have a difficult time investing in strategies that deviate from the index, despite the opportunity to generate greater returns far exceeding the index over the long-term.

The reason why investors have such difficulty investing in strategies that bear little resemblance to the index is that no matter how good an investment strategy is, at some point, it will underperform the index over some arbitrary time period. And when all of the neighbors own the index, most can’t stand it when those neighbors get rich while their portfolios remain stuck in the mud.

Most investors say they want to earn a high return on their investment. Practically, the vast majority of investors are more focused on sticking with the herd and trying to just keep up with their neighbors (i.e. earn the index return). This preference for the index prevails irrespective of its risks or prospective future returns and despite the existence of potentially more lucrative investment opportunities. This is an ideal way to avoid the potential envy and fear of missing out that accompanies the occasional underperformance of a non-index strategy, while abdicating accountability. Institutional investors don’t like to deviate from the index too much as it dramatically increases their career risk. It’s the capital markets equivalent of, “nobody ever got fired for buying IBM.”

Given this dynamic, it’s not surprising that the index is now a core component of most investors’ portfolios.

Nonetheless, it’s worthwhile exploring – can the index get any better?

An Improvement Upon the Index

Noted academic Jeremy Siegel trumpeted “Stocks for the Long Run” in 1994 and, thus far, he’s generally been proven right (despite the occasional nasty bear market). Over the long-term, being long of the index has been a winning proposition, and it is likely to continue to be such.

That being said, within the past 20 years, a new investment style has emerged as perhaps an index-beater. This upgrade to the common investment dogma is known as factor investing.

Factor Investing in Pursuit of Outperformance

Factors refer to certain characteristics of stocks that have historically exhibited predictive ability regarding future share price performance. Some common factors include value (cheap stocks outperform expensive stocks), quality (profitable companies outperform money-losers) and price momentum (stocks going up tend to continue to do so, and vice versa for declining stocks). Investors can make factor bets from the long side, aiming to buy stocks expected to outperform, and from the short side, aiming to short sell stocks expected to underperform. Many long-short and market neutral hedge fund strategies utilize multi-factor models to craft their portfolios.

Traditional indexing weighs portfolio stocks according to their market capitalization. This means the larger the company’s value, the larger the company’s weight in the index. While this weighting methodology has been in place for many decades and accepted as the default, it has only been questioned recently in its practicality. The major issue is that size is not positively correlated with investment performance. In fact, it’s the opposite. Historically, the size factor has had predictive ability, but in a divergent way that the index utilizes it. Typically, the smaller the stock, the better the return and vice versa. Research has shown that over the long term, large capitalization stocks underperform small caps.

Investment firms have utilized factors to create investment strategies that capitalize on the predictive ability of certain factors. Robust factors have solid academic backing and a track record of real-money success.

Accelerate’s factors of choice include Value, Quality, Price Momentum, Operating Momentum and Trend. These factors are utilized to select a portfolio of stocks that best exhibit these characteristics on the long side and also select stocks that least exhibit these characteristics on the short side. Combining these factors together creates what is called a multi-factor portfolio.

Multi-factor long-short investing is a strategy with a great track record of outperformance that some investors cannot stick with due to emotional reactions such as envy and fear of missing out during the occasional bouts of underperformance as compared to the index.

Is there a way to harvest these factor returns while tracking the index reasonably well such that investors will be provided the wherewithal to stick with the strategy?

Alpha + Beta refers to a strategy that combines the index returns (“Beta”) with a long-short multi-factor overlay portfolio (“Alpha”).

What makes this strategy great, conceptually, is it combines two major psychological forces to the benefit of investors:

Alpha + Beta in the US Stock Market 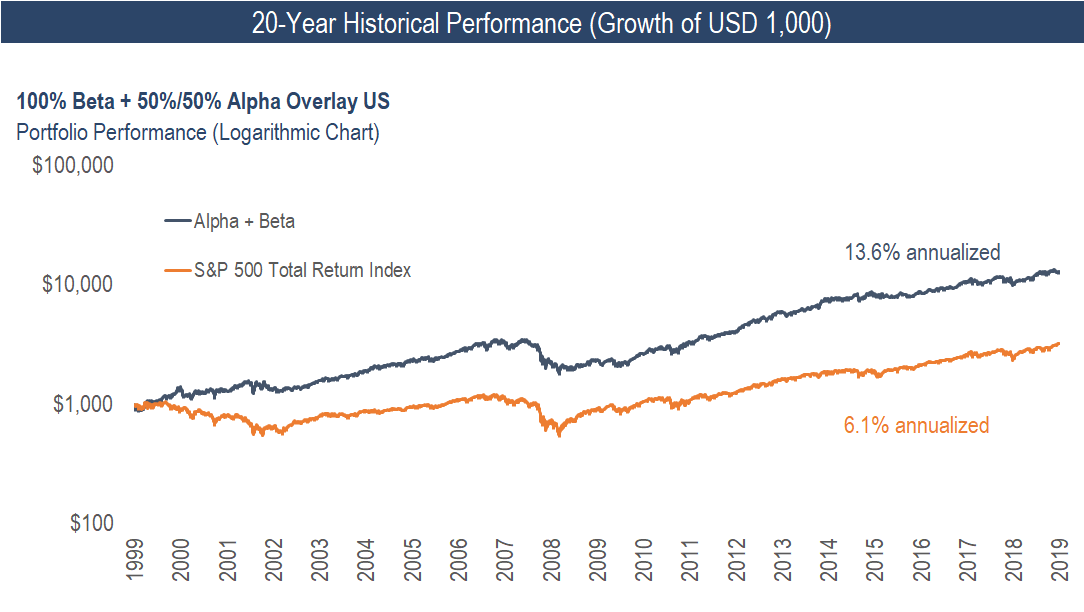 Furthermore, Alpha + Beta attained these returns with a correlation to the index of 0.86, which is relatively high and indicative that the strategy’s daily performance closely coincides with that of the index. This can help reduce the anxiety that investors feel when a strategy isn’t keeping up with the index during an upward move.

In addition to a track record of substantial outperformance above the index (as shown in blue above), the Alpha + Beta strategy provided numerous risk mitigation benefits, including: 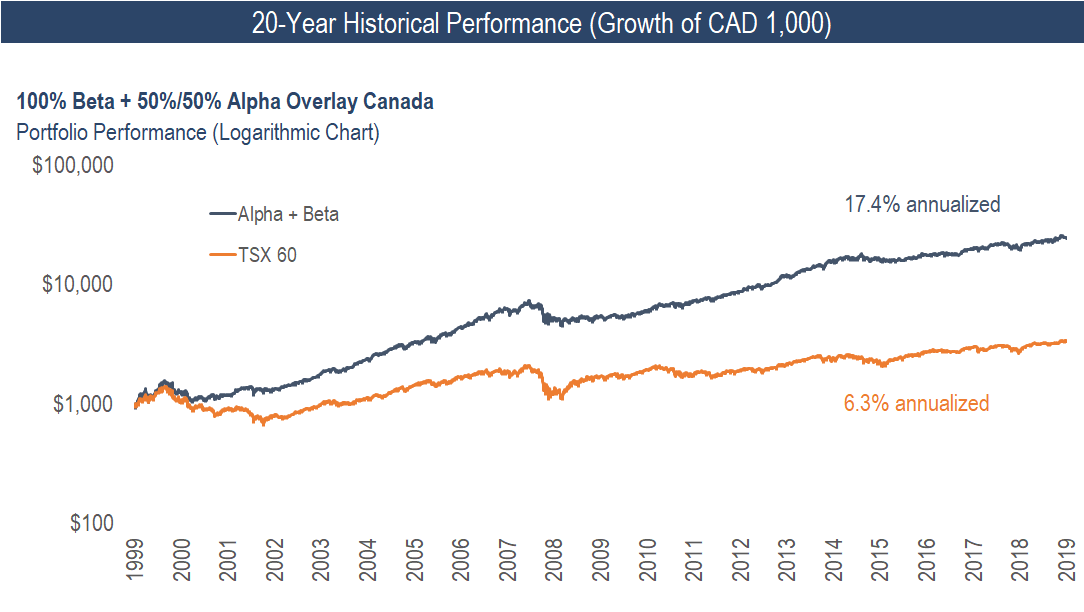 The Alpha + Beta strategy had a high correlation to the index of 0.89, representing relatively good daily tracking to the overall market’s performance.

The current zeitgeist in the investment management business consists of a near infatuation with the S&P 500, and it’s Canadian comparable the TSX 60. The considerable performance of these indices over the past 10 years have left investor expectations high.

That being said, Alpha + Beta represents one of the latest innovations in investment management because it offers a considerable improvement over the traditional index.

Is Alpha + Beta the best thing since Allen Iverson crossed up Michael Jordan in 1997? Only time will tell. Regardless, the combination of its track record of outperformance and risk mitigation effects, along with its index-tracking ability which allows investors to stick with it, makes an allocation to Alpha + Beta a compelling proposition. I posit that enterprising investors who take advantage of the opportunity to allocate to Alpha + Beta early in its growth stage will be rewarded, just as early adopters of the three-point shot were.

For more information on Accelerate’s Alpha + Beta ETF, the Accelerate Enhanced Canadian Benchmark Alternative Fund (ATSX), reach out to us at 1-855-892-0740 or info@accelerateshares.com.